In general comics have been decent, but little has been great. This week has solidified one opinion in my mind that for me the writer is more important than any other part of the comic book process. The art and coloring are also important, but without a good story I could care less about the book. Right now in my opinion the best writer in comics is Scott Snyder. His work is consistently of a high quality and coherent. Next up is Jeff Lemire who tells an engaging story in every type of genre. Grant Morrison and Ed Brubaker are also strong candidates, but have had some inconsistencies in material. Of course Grant has to win overall right now as the body of his work is enormous. You would think that means I going to mention their work and I’m not even bringing up Snyder or Lemire’s books this week, although I strongly recommend Swamp Thing, American Vampire, Animal Man and Sweet Tooth which all came out last week and were good to great books. It was just in reading their material I was struck how a book with their name means good story telling. All of these issues were middle chapters, but moved the plot forward and left you wanting to read the next chapter. 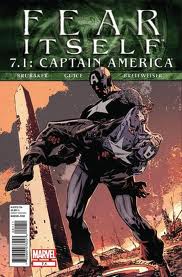 I will talk about Fear Itself #7.1 by the aforementioned Ed Brubaker and art by Butch Guice. Why this is a Fear Itself book is odd, but I guess since Bucky died in Fear Itself it works, but it is really a “whatever” thing. The important part is this story revealed that Bucky did not die the least shocking thing ever. Since Ed has spent so much time developing Bucky and has been continuing to reveal his back story in Captain America and Bucky I had no real feeling he was being killed off. I wanted a Winter Solider book and felt that the story of Bucky being a covert operative is more interesting than him being Captain America. This issue was all about giving us comic book logic on how Bucky was saved and they threw in the unnecessary idea that the last of the “infinity formula”, used by Nick Fury to stay young, was used to save Bucky. This is a plot point that was not needed because Marvel never changes their characters, so why set up that Nick could start to get old. Regardless this issue was all set-up for the new Winter Solider series but was very entertaining and well done. It was a perfect prologue in setting the stage for a new series and yet you could pick up the new series and have not missed anything. It gives Ed a series that will be set in his wheel house as the Winter Solider can be a very noir book and still use the MU. 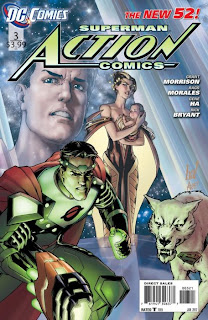 Next up is another great writer and arguably the best writer in comic book history Grant Morrison on Action Comics #3 with art by Rags Morales and Gene Ha. First off these two artists are just doing fantastic work. Gene Ha on the Krypton scenes were borderline genius and then Rags back on earth a few years in the past conveys are the nuances of a young man learning his way in the world as both a person and a Superman. The Krypton part of the story is about how their world was destroyed and in the beginning you are wondering how this plays into the current storyline. As we move to the current story line we find out the same disaster that visited Krypton is visiting our planet. At the same time we are building up who Clark Kent is and his personal relationships with Lois, Jimmy and the city itself as Superman. It feels at once modern and retro at the same time. I could read about this part of Superman’s life for a few years with no problem. I was worried Grant had done his Superman story with All Star Superman, but he has made Superman into an outsider and social crusader as well as a super hero for a more modern world. 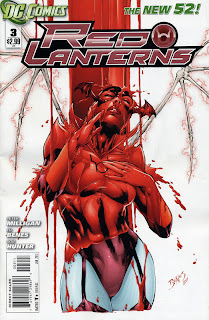 Next up is Red Lanterns #3 by Peter Milligan with Ed Benes on pencils and Rob Hunter on inks. The art on this book looks great. Ed disappeared for awhile and his prior efforts had lost something, I think trying to ink his own stuff was either slowing him down or just taking him off his game, but Bleez looks great and the overall look of the book is top notch super hero art. I was wondering how this concept would work as the Red Lanterns are not much more than a one note thing, rage and blood puke. I like how this is being set up about Atrocitus deciding to act as the revenge for injustice across the universe, like a Punisher with a ring. Adding Bleez as his lieutenant and getting her back story was good. She was a woman abused by two men of her planet that she turned down. We also find out that she was not necessarily a very good person before this happened anyway and she is not content to be ruled by Atrocitus.  This issue concludes the set up for the series and now we have to see where we go from here. I trust Milligan will play with all the elements he has put into place and he has quelled my concerns about how this series can be an unlimited one. 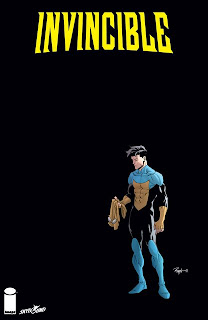 Last for this week I want to mention Invincible #84 by Robert Kirkman, Ryan Ottley pencils and Cliff Rathburn on inks. I’m still unhappy with fat Atom Eve and the portrayal of her, but I’m really enjoying this change in Mark Grayson. Mark is feeling the futility of being a super hero and wants to actually try and do something to change the world. He has come around to thinking that Dinosaurus was right and proceeds to break him out of jail and in the process is now considered a villain himself. This theme has been explored before but Kirkman can take his character where ever he wants to go and is not beholding to corporate masters to not make changes in his character so this could be interesting. At the very least I’m back to be a fan of the series again instead of questioning whether I want to continue to buy the book.
Next week’s list is almost reasonable; Wulf, Jennifer Blood, Rachael Rising, Dollhouse Epitaphs, Baltimore Curse Bells, Pigs, Uncanny X-Force, Punishermax, Point One, New Avengers, Journey Into Mystery, Unwritten, Superboy, Suicide Squad, Sage of the Swamp Thing HC Volume 6, Resurrection Man, Penguin, Mister Terrific, Legion Lost, Huntress, Grifter, Green Lantern, Frankenstein Agent of Shade, Demon Knights, Deathstroke, Batwoman, Batman and Robin and Batgirl.
That’s a wrap, see ya next week.
Posted by Jim at Monday, November 07, 2011