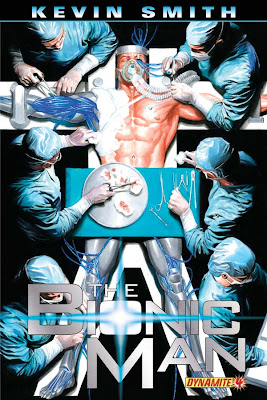 Based on a story by Kevin Smith
Script by Kevin Smith with Phil Hester
Art by Jonathan Lau
Colors by Ivan Nunes
Lettering by Simon Bowland
Publisher: Dynamite
Price: $3.99

Happy belated Thanksgiving everyone! For those of you in the States that just celebrated said holiday, how did you feel after the big meal? Bloated? Sluggish? Lethargic? Gut-busted? The three-letter F-word? Well, I certainly hope not, but chances are some of you are not quite yourselves even two-days out from Turkey Day. It is in your honor that I review the latest issue of The Bionic Man published by Dynamite. Where we to see someone get “Better… Stronger…Faster!”

I started out skeptical of this series, especially given some of the violent content and language in the earlier issues. However, the steady pace of Steve Austin’s origin story has really hooked me in. I thought for sure that we’d have to wait six full issues before he’d be out running in his signature red jogging suit. Surprisingly, the plot accelerated quickly this month and we got the bionic surgery and the running scene with Austin ready for his first mission by the book’s end. I suppose we’re still in the first arc, but this was a very satisfying cap to his becoming a cyborg.

The key to all this has been the human heart of the story, which was a hallmark of the classic TV series. Sure it had action, adventure, high (backwards) jumping, and slow-motion running, but Steve was first and foremost just a “regular” guy who cared about his country and people in trouble. This couldn’t have been accomplished effectively in a faster paced book (Geoff Johns take note).

Essentially, the first four issues cover everything shown in the opening title sequence (taken from the original 1973 movie). Only here it’s greatly expanded and realistically updated for the 21st century. In issue one, we get a glimpse of the fully whole Steve Austin and the doomed test flight. Issue two, the fiery crash and the life-saving surgery to stabilize him. Issue three, his struggle with his injuries and his decision to keep on living. Finally, in this issue he chooses to accept the bionics, coming to grips with being more than human. Throughout all this has been the genuine friendship and concern of Oscar Goldman and Rudy Wells (his doctor) for Steve.

Some of the updates have been downright brilliant – many of them revealed this issue:

Oscar and Rudy bring a German Shepherd into the hospital to see him, much to the consternation of the nurse on duty. Steve sits solemnly in his bed still bandaged up where his right arm, left eye, and both legs were amputated after the crash. He’s not impressed with this dog that they brought to cheer him up. “What’s he going to do for me? Roll over? Beg?” “He’ll fetch you your slippers”, Oscar wryly says. “Oh, SMILE dammit. That was funny.” Then they tell him how this dog was nearly beaten to death and show him that it’s cybernetic. The dog proving he’s “very normal” cocks his leg and whizzes on the floor. And with that Steve agrees to the surgery, providing he can get out if he “start[s] to feel like a guinea pig”.

Next we have the surgery sequence and the expanded monologue from the theme song. Only there are several new elements this time around. His bone marrow is replaced with steel alloy to reinforce his skeletal structure (the blood cells are now manufactured outside the bone). They implant a fail-safe (kill-switch) device (I don’t think he’s going to be able to quit his job after all) as well as an on-board 3 TB computer. Then shockingly, they remove his other “good” arm, because of the weight displacement it would cause. Generators are added that will prevent him from experiencing fatigue (We see this in action later where “heads for the mountains at 60 mph with barely a jump in his heart rate). They also remove his “good” right eye to ensure “optimum binocular performance”. Finally, they add a special facial layer that will allow him to change his appearance like a modern-day Mask-a-tron. Steve Austin – more machine than he bargained for. But that’s the point, having spare parts doesn’t diminish the humanity of his mind and soul.

The story has been great and the dialogue is very natural and realistic. The covers by Alex Ross are breathtaking, particularly the one for this issue. (Honestly, I think it’s some of Ross’ best work in years and I love that the UPC and price are on the back.) The art by Jonathan Lau is exceptional and looks awesome colored (I’m pretty sure) directly from his pencils by Ivan Nunes. I really like the way Lau captures all of Oscar’s body language too. The creative team has to pull off action scenes and emotional moments and so far they’ve been very, very successful. It’ll be a real test to see if they can keep up the human angle in the upcoming “mission” stories. I sure hope so.

Grade A: The modern retelling of the Bionic Man’s origin in the first four issues has been phenomenal, emotionally gripping, and true to the heart of the original TV show. I’ve been a fan of the Six Million-Dollar Man since before I took my lunchbox featuring him to Kindergarten decades ago and I am VERY pleased with this series and looking forward to what happens next. 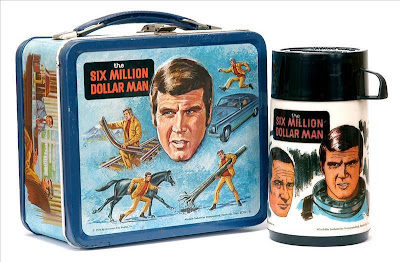