The Best and The Rest March 16


I’m not sure why but it always seems like March is a good time for comics. I think it is because it is spring and the promise of the yearly renewal puts me in a better frame of mind. Additionally we are getting tons of news of the plans to come in the rest of the year. When you hear JMS is writing Superman and Wonder Woman you have to think this could be good, so until we actually get an issue of the comic we can be excited about a new creative team at the helm of various books. Once the product hits it has to deliver. 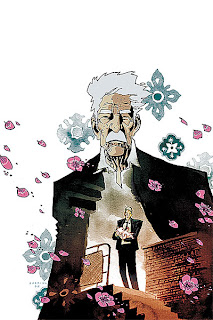 Daytripper #4 (of 10) - Story and Art Fabio Moon & Gabriel Ba, Colors Dave Stewart. I love this series. Each issue is deceptively simple yet it stirs so many feelings and emotions that it is quite amazing. This issue this story is about Bras as his wife is giving birth to their first child. At the same time as his son is being born his father dies. We see Bras at an interesting point in his life where everything seems to be the best it could be. He has a wife he loves, a new son, has just successfully published his first novel following in his father’s footsteps and then after his father dies he dies of a heart attack tragically at 41. One of the reasons this book works so well for me is that I reflect upon my own life at various points and instead of the story being about Bras it causes personal reflection and the story enriches my own life. I think about the birth of my two daughters many years ago, I think about the great relationship I have with my wife (not my first wife, but my last), I think how lucky I am that my Dad is 90 and still alive and doing well. Bras’ dying at the end of every chapter is now what I expect to happen and whether it is a story gimmick or not what it does for me is to emphasize how fragile life is and that it can end at any moment. I once read that we love something more because of it impermanence. The example used was a real rose versus a silk rose. The real rose has a short time span and we appreciate that more than a silk rose that could last forever. See my full review here. Batman and Robin #10 – Writer Grant Morrison, Pencils Andy Clarke, Inks Scott Hanna, Colors Alex Sinclair. This book shot right back up to the top of the charts. Grant is having a great run with Batman and I hope he never leaves the book. This issue had so many great story elements that it was incredible. Damian is great in this issue, from being in the Wayne Enterprises boardroom, to giving Dick grief as they look for clues as to Bruce being lost in time. We also get to see some of Damian’s insecurities and the fact that he likes being Robin to Dick’s Batman. A final twist is Talia doing some sort of mind control to have Tim take out Batman. We also have Batman meeting with the mysterious Mr. Sexton who Grant is having us think might be Bruce Wayne in disguise. There is so much going on and it all is playing together so well. DC really needs to start collecting Grant’s run on Batman in deluxe format books of 12 issues each as this material deserves special treatment. A word or two about the art, Andy Clarke is getting better and better and I’m starting to think that DC may have a greater stable of strong super hero artists then Marvel. Add to Andy’s work the top notch Scott Hanna on inks and Alex Sinclair on colors and the book looks as good as it reads. One final thing this book shows that going with pencils and inks still produces a superior quality book. I know with a lot of the digital tools out there that original art is going the way of the Dodo bird, but going straight from pencils to coloring looks cheap (usually) compared to this work.

Other Books of Note

got two very solid issues of good series from DC. I have them together as this was the beginning of a cross over and the start of Ras As Ghul trying to kill anyone that Bruce Wayne cares about. It feels like all the Bat books are building up to the return of Bruce Wayne. I want Dick to remain as Batman, but I’m curious to see how this is all pulled together.

Criminal #5 – This issue concludes the arc the Sinners. It was a well done series but the ending felt a little contrived as the guy after Tracy shows up to save him and then lets Tracy finish up his business before being taken back to the Army. I get the feeling Brubaker has a Tracy Lawless in the military story in the back of his mind.

Jersey Gods #11 – A great twist to end this issue and set up the finale of the series. I hope that against all odds this book does get a second life down the road somewhere as it deserves a longer life than it has had.

Justice League Rise and Fall Special – I liked this opening chapter. The JLA discover GA has killed Prometheus apparently in cold blood and they try to capture him. Ollie escapes and is apparently going rogue and feels more people need to pay before he stops. Should be a fun ride and this has to change GA’s status in the DCU forever.

Punishermax #5 – I’m enjoying this series, but I was a little disappointed that we created a new version of the Kingpin that is very similar to the old version. Also he is still alive and I hope this is playing into a long story that Jason Aaron has in mind. Finally they introduced the Max version of Bullseye and he still has the stupid target tattoo on his forehead. Using ideas from the Daredevil movie is never a good idea. I’m hoping Jason can give us more than rehashes of people we have seen in the MU before and I hope that we get to see the Punisher take out some of these bad guys.

Rebels #14 – Dox beats Starro the Conqueror and the enslaved worlds and galaxies are freed. This is an under the radar series that is showcasing Tony Bedard’s writing skills and they are considerable as he managed to craft a great 14 issue storyline they held together very well.

Secret Six #19 – Gail is in her element with this book and this was another great issue of what is one of DC’s best ongoing series. I love how Bane has taken over this group and how irate he gets when he finds out they will not listen to him. Ragdoll was great as he stepped up and saved Black Alice this issue. The ending of this issue was also very cool as Catman was told to kill his allies or else his son was going to be put to death.

Superman Last Stand of Krypton #1 (of 3) – Nice to see Superman back in action as opposed to Kal-El. Superman is finally getting in gear and the start of Brianiac’s attack on New Krypton was well done.

The Twelve : Spearhead – This was an excellent one-shot by writer/artist Chris Weston and really maintained the spirit of the maxi-series that has been on hiatus for a long time. It served as a prelude to the original series and has whetted my appetite for the rest of the maxi-series which I guess is coming out later this year. I have read issue #9 is all but complete and now we only await word on issues #10 - #12.

After complaining last week I managed to keep this post to a realistic size. Trying to do a week in review it is almost impossible to keep it under 1,000 words, but somewhere between 1500 and 2000 seems about right.