Marvel Preview Review for May Part 2 of 2

PART 2 As Promised or is that threatened? 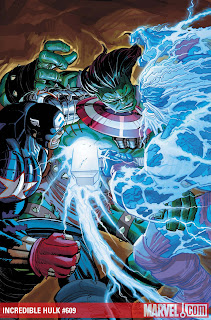 HULK #22
WORLD WAR HULKS BEGINS!
INCREDIBLE HULK #609
WORLD WAR HULKS CONTINUES!
"Planet Hulk" was big. "World War Hulk" was bigger. Now with "World War Hulks," the Marvel Universe explodes with the biggest emotional story ever to hit Bruce Banner and the Incredible Hulk! Following the mindbending twist ending of "Fall of the Hulks," everything Bruce Banner knows has been turned upside-down -- and everything he's ever desired may be just a heartbeat away. Written by Greg Pak (PLANET HULK, WORLD WAR HULK) and drawn by Paul Pelletier (WAR OF KINGS, FALL OF THE HULKS: ALPHA), don't miss the insane action and non-stop revelations as Skaar, Son of Hulk, enters his most brutal battle, Bruce Banner faces his greatest temptation, and the secret identity of a certain scarlet smasher is finally revealed!
40 PGS./Rated A …$3.99
Lee: I’d like to point out that we guessed this (House of Hulks) was going to happen last month! Not that it was all that much of a stretch but we did it. Yahoo for us. Then again, this is such an incredibly stupid idea I’m sorry that we were right. So very, very sorry.
Jim: Oh look I may have to jump into this story as Marvel has allowed Greg Pak back onto the Hulk book and maybe he can try and salvage his story from the ess Loeb has made. 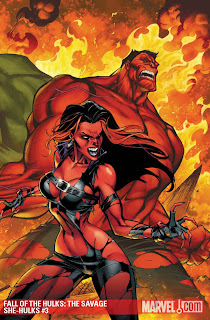 FALL OF THE HULKS: THE SAVAGE SHE-HULKS #3 (OF 3)
Written by JEFF PARKER
Penciled by SALVA ESPIN
Cover by J. SCOTT CAMPBELL
Lee: Let’s talk costume design.. Shouldn’t the belt be around the waist and the zipper, like, for, say a jacket, be around the boobs? Then again maybe not.
Jim: Lee is obsessed with boobs, really and it is sad because he reflects the stereotypical male comic book fan who is just boobs obsessed. Boobs, boobs, boobs, all we want is boobs. I mean Lee, all Lee wants is boobs. 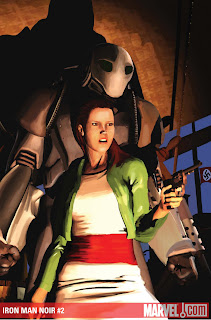 IRON MAN NOIR #2 (of 4)
Written by SCOTT SNYDER
Penciled by MANUEL GARCIA
Cover by MIKE FYLES
In 1938 New York City, when the country is at the brink of war, Tony Stark has discovered something that could turn the tide…and save his life. The plot thickens as Tony and his crew take to the high seas in search of the Lost City of Atlantis, with the Nazis hot on their heels. Scott Snyder and Manuel Garcia reimagine classic Marvel characters as they’ve never been seen before, in the second issue of a pulp thrill ride you won’t want to miss!
32 PGS./Parental Advisory …$3.99
Lee: What the hell is this? A tastefully dressed woman? With the correct anatomical proportions? OH HO NO! Not in my Marvel Universe there won’t be. I won’t support this kind of good taste material.
Jim: It is set in 1938 so really all people were skinny and emaciated, so this is really an exaggerated female form for 1938.
Lee: Oi. I hate when creators talk to us because I'm always wrong! I need to back track a weee bit and say this actually sounds like a good book. I thought it was going to be more steam punk, but Scott corrected me and pointed out it was more Indiana Jones. With that premise in mind, Tony Stark is a good fit, and this should be a good series. So, I shall support the series... Even if I am embarrassed to buy a cover without boobs hanging out all over the place.
Jim: Scott was very honest knowing people thought the noir and Iron Man concept wouldn't work, so the pulp tact should work. 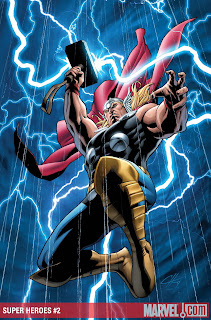 SUPER HEROES #2
Written by PAUL TOBIN
Penciled by RONAN CLIQUET
Cover by CLAYTON HENRY
Lee: That’s a pretty striking cover. Clean. Tight. Wwwwwaaaaiiiitttt a minute. That’s the Dark Knight wearing Thor clothes. No wonder I like this, it’s a swipe. How about we try for something new and original next month?
Jim: Swipe is such a harsh word, it is homage. 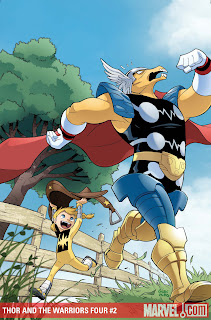 THOR AND THE WARRIORS FOUR #2 (of 4)
Written by ALEX ZALBEN
Cover and Art by GURIHIRU
Hercules backup by COLLEEN COOVER
Lee: Now this is a great cover! This screams pure fun. Congrats on getting one right Mr. Editor. Although, it might be more interesting… waaaayyyyy more interesting if that were the Red SheHulk (with the boob belt) chasing after Beta Ray with the saddle. Then I could certainly see a reason to run!
Jim: Actually this is a very cute cover, it made me smile just to look at it. Lee of course had to sully it with his sexual innuendos and talk of boobs again. Sad, really, really sad.
Lee: You smiled? Really? Did it hurt when 'the event' occurred? 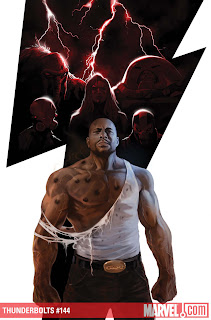 THUNDERBOLTS #144
Written by JEFF PARKER
Penciled by KEV WALKER
Cover by MARKO DJURDJEVIC
Heroic Age Variant by LARRY STROMAN
THE HEROIC AGE IS HERE!
The new era for Marvel’s always-evolving, always controversial team kicks off here! It’s a beginning, a return, a departure, and an arrival of a new artist (MARVEL ZOMBIES 3 & 4’s Kev Walker) all rolled into one in a fresh, shocking status quo! The most dangerous people on Earth are now all in one hellish prison, and the only way out is through rehabilitation and contribution to society via The Thunderbolts...under the leadership of the steel-hard-skinned Avenger named Luke Cage! So bring on the first participants: Juggernaut! Crossbones! Ghost! Moonstone! And…Man-Thing? Against the sordid recent history of the group as a black ops kill squad, can Power Man restore the Thunderbolts to their rightful potential? Find out as the entire series is revamped, and also discover why ComicsBulletin.com says: "Jeff Parker writes villains with his typical panache...This is why I read comic books."
32 PGS./Rated T+ …$2.99
Lee: Ok. For those keeping count, this is good book number two. Parker is a great writer and Thunderbolts just needs a reboot. Yeah, it’s the Suicide Squad of the Marvel U but so what. I’m betting this is good.
Jim: Parker has been writing this book for a few issues and I like Jeff's work a lot since X-Men First Class and of course Agents of Atlas. 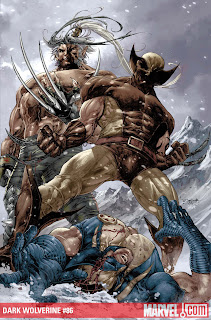 DARK WOLVERINE #86
Written by MARJORIE LIU & DANIEL WAY
Pencils & Cover by STEPHEN SEGOVIA
Heroic Age Variant by TBA
“RECKONING” PART 3 OF 4
For decades, Daken has waited for the moment that has now finally arrived. In one fell swoop, Daken plans to both destroy his father and achieve his destiny. The streets of Ankara run red with blood as Daken faces off against…Romulus! 32 PGS./Parental Advisory …$2.99
Lee: For something different, let’s talk about stupid character designs. How about Romulus with fake claws sticking out all over his hand? I’m sure that thumb claw is really effective. Dumb, dumb, dumb.
Jim: It is like Marvel decided the number of claws you have ranks you in the Wolverine hierarchy or something equally inane. 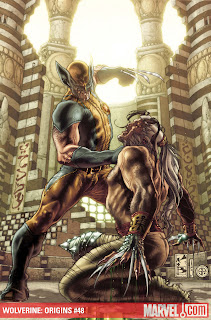 WOLVERINE ORIGINS #48
Written by DANIEL WAY
Penciled by WILL CONRAD
Cover by SIMONE BIANCHI
Heroic Age Variant by TBA
“RECKONING,” CONCLUSION
Revenge. It is what has motivated Wolverine for over a century. But now, with that revenge within reach…is it really what he wants? More importantly, is it really what he needs? A new era begins as Wolverine finally considers his future instead of his blood-stained past.
32 PGS./Parental Advisory …$2.99
Lee: Speaking of claws, I know this is hard but how about drawing them straight? Not curved. Not bent at 90 degree angles. You know, straight like they’re meant to be.
Jim: LOL "like they're meant to be"? Within our comic book world we have things that need to be a certain way.
Lee: OH YEAH, did ya read the hype? “Wolverine finally considers his future instead of his blood-stained past.” Oh thank goodness, he’s going to think about his past because otherwise the other 40 mini-series we’ve had in which he hacks people to bits would have been a complete waste.
Jim: Of course Old Man Logan shows that he may have a blood stained future in front of him as well. 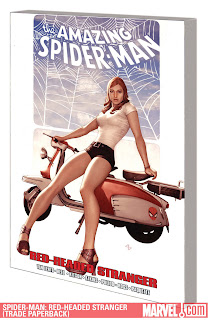 Jim: See with letting Lee run wild we can skip all the hype about a "Heroic Age" and talk boobs.
Lee: Wait wait wait. I was talking about bad costume design! You were talking boobs.