Jim’s got his weekly “Best and the Rest”, Gwen has her “Fistful of Reviews”, and Thomm has his monthly “List”, so I guess I need a semi-regular feature to showcase some mini-reviews of books I’ve recently read too. Hence, the title “Recent Reads”. Hmmm…I wonder if this feature will always correspond with the "dreaded deadline doom”. Oops, I forgot the mike was turned on already… 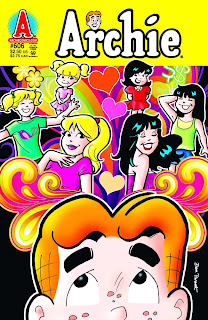 This was the epilogue issue to the “Will You Marry Me?” storyline, which I loved. Only the first of the three stories actually relate to the “weddings” and it’s just ten pages long. I really liked how it started as Archie is still affected by his trip “up memory lane” and can vaguely remember being happily married to both Betty and Veronica. This really spurs him to try to talk with the two girls. He even shows he’s more sensitive than before (genuinely acknowledging Betty’s value to him and comforting Veronica after she gets cut from the cheerleading team). Unfortunately, when the girls kiss him in gratitude, he can hardly keep his head on straight and inadvertently schedules a date with both of them on the SAME night! It’s not a pretty sight when they catch up to him. Needless to say he’s a long way from marrying either of them now. Basically, back to your typical Archie status quo – bummer.

The third story “Unflappable” was entertaining and clever. Archie wants to show a new girl around on Saturday night, but he’s already got a date with Ronnie. So, he plans to do all the things that bug her to get her to break the date. Only unbeknownst to him, Veronica overhears him telling his plan to Jughead and acts like she isn’t bothered all week. However, Veronica’s plan backfires on her, because her father, Mr. Lodge, refuses to let her go out with him that night, since she’s putting up with Archie’s antics.

I guess I’m not ready to give up on Archie just yet – I’m invested in the character again. Plus, my girls are screaming for the next issue. 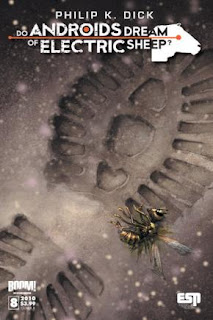 I’ve got to say that I was seriously thinking about canceling this series. When you get the limited number of books that I do and still manage to delay reading an issue for a month, something is wrong. Well, once issue #9 came out, I finally decided to open up issue #8. Boy, was that the issue I needed to keep me on board for awhile longer. I thoroughly enjoyed it.

I’ve always loved the Bladerunner movie and I first read the original Philip K. Dick novel in my Fantasy and Science Fiction class at Tech, so I already knew the story was good. What I like about this experimental series (maintaining the novel’s text in its entirety) is it helps you to better visualize the story. However, some issues come off a little weak – maybe the story doesn’t move along enough (i.e. nothing happens) or the images aren’t very interesting, which is why the book was on the chopping block. Issue 8 is a prime example of the experiment working well.

Rick is tracking down Luba Luft, one of the Nexus 6 androids. She’s a member of an opera troupe that is performing Mozart’s “The Magic Flute”. After watching her practice performance, he goes to her dressing room to administer the Voigt-Kampff empathy personality test on her. He asks situational questions, but she frustrates his results by answering his questions with questions of her own. In addition to accusing him of being a pervert, she also suggests that he may be an android himself, since he has no empathy when it comes to killing “andys”. When he goes to retrieve a piece of the testing devise that she “accidentally” dropped, she pulls a laser tube on him.

For an issue that basically consists of two people talking for the most part, Tony Parker does an outstanding job of keeping it interesting – changing the point of view, panel layouts, “camera” angles, etc. He even gets to depict some good concept scenes – like the skeletons on stage to illustrate that the actors will eventually just turn to dust. He also gets to flesh out the text by showing Mozart when Rick is thinking about him. Something I would never be able to do in my own imagination while reading a novel.

Unfortunately, issue #9 was less meaty and much weaker, but I know there will be other issues like #8 and as a whole this series is still working.

The OZ/Wonderland Chronicles: Prelude to Evil # 1 (Buy Me Toys) 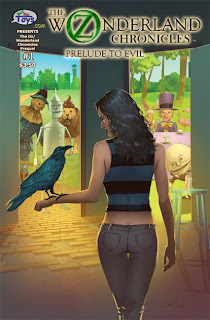 I’ve been following this series from the beginning, which I think was several years ago as I was still doing Cosmic Comix Conversations at the time. It only comes out about two times a year, so I’m a little fuzzy on what is going on at present, but I enjoy it just the same. This is the second (that I recall) supplemental issue (Jack and Cat tales being the first). It’s not really the primary series. This issue is actually listed as a prequel. Right now, we’re getting snippets of what’s going on and eventually we’ll know the big picture. Basically, Alice and Dorothy are now in college, having vaguely remembered their childhood Wonderland and Oz experiences more like dreams. However, the magical realms are now bleeding over into the “real” world with people crossing over between the two regions.

This issue focuses on Sarah Holmes, who is dealing with her mother’s abusive relationships and she really doesn’t want to repeat her Mom’s mistakes. Although, Sarah’s current boyfriend is a real jerk. She e-mails a fantasy author about how she really wishes there was a fairy king to rescue her. (The fantasy author's work may actually be a bleed-over from the magical realms.) Sarah’s Mom has been attacked and Sarah thinks it’s the result of her Mom’s boyfriend, but it turns out he was trying to protect Sarah from some sort of magical monster. Anyway, I can’t go into all the details, but I like the magical elements and I like the personal character elements too. It’s a nice series, taking a familiar concept and really doing something unique with it. Plus, the covers are always outstanding (Although the one I got wasn't as good as this one -- I hate multiple ABC covers! Just give me the best one.)

Incidentally, I get to see the Wicked musical with my daughter today! – It’s a Daddy-daughter date with my new teenager. 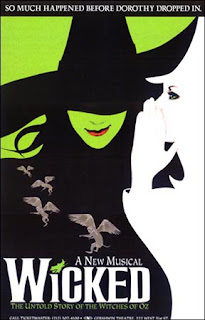