:01 First Second
Solomon's Thieves GN by (W) Jordan Mechner (A) LeUyen Pham, Alex Puvilland
Life as a Templar Knight returning from the Crusades is dull - bread, beans, and lots and lots of walking. But after Martin stumbles upon his lost love (now married to someone else), things begin to get more interesting very quickly. There's a vast conspiracy afoot to destroy the Templar Order and steal their treasure. Soon, Martin finds himself one of the only Templars out of prison - and out for revenge! The first volume in a trilogy written by Jordan Mechner, the creator of the acclaimed Prince of Persia video games. $12.99 Mechner talks about Thieves here and visit Puvilland's art site here
Jim: An easy pass for me. First the writer of the video game is not an inducement for me to want to buy your graphic novel. Second it is the first volume in a trilogy. How do I know you will finish it and when will it be finished. Finally are you skilled enough to make each part a story to stand on its own? Too many unknowns for me to take a chance.
Lee: You make good points but I'm willing to risk it. Mainly because (1) :01 Second is a quality publisher and (2) it's no different than a monthly book these days! How many series have we seen start and never end (We're talkin' bout you Image Comics!). Let's not forget that Puvilland's a proven French artist who's used to working like this. Low risk, high reward. I'm sold.

Foiled GN by (W) Jane Yolen (A) Mike Cavallaro
A quirky, fast-paced urban fantasy about love, friendship, and fencing by acclaimed children's author Jane Yolen and Eisner Award-nominee Mike Cavallaro. Aliera Carstairs just doesn't fit in. She's always front and center at the fencing studio, but at school she's invisible. And she's fine with that, until Avery Castle walks into her first period biology class. Avery may seem perfect now, but will he end up becoming her Prince Charming - or is he just a toad? $15.99Visit Mike here tell him ComicsAnd said hi!
Jim: Will he know who we are? This sounds like a good book for Dad to read to younger children, at 28 and 24 my kids do not fit the bill.
Lee: It may be too young for you but it's perfect for me. Not to mention, I really like Cavallaro's art and I'm always willing to support his work.

Fantagraphics Books
Four Color Fear: Forgotten Horror Comics of the 1950s SC
Of the myriad genres comic books ventured into during its golden age, none was as controversial as or came at a greater cost than horror; the public outrage it incited almost destroyed the entire industry. Yet before the watchdog groups and Congress could intercede, horror books were flying off the newsstands. During its peak period (1951-54) over fifty titles appeared each month. Apparently there was something perversely irresistible about these graphic excursions into our dark side, and Four Color Fear collects the finest of these into a single robust and affordable volume. EC is the comic book company most fans associate with horror; its complete line has been reprinted numerous times, and deservedly so. But to the average reader there remain unseen quite a batch of genuinely disturbing, compulsive, imaginative, at times even touching, horror stories presented from a variety of visions and perspectives, many of which at their best can stand toe to toe with EC. All of the better horror companies are represented: Ajax-Farrell, Atlas, Avon, Charlton, Comic Media, Fawcett, Fiction House, Gilmor, Harvey, Quality, Standard, St. John, Story, Superior, Trojan, and Youthful. Artist perennials Jack Cole, Steve Ditko, George Evans, Frank Frazetta, Alex Toth, Al Williamson, Basil Wolverton, and Wallace Wood contribute both stories and covers, with many of the forty full-sized covers created by specialists Bernard Baily, L.B. Cole, William Eckgren, and Matt Fox. Editors Benson and Sadowski have sifted through hundreds of rare books to cherry-pick the most compelling scripts and art, and they provide extensive background notes on the artists, writers, and companies involved in their creation. Digital restoration has been performed with subtlety and restraint, mainly to correct registration and printing errors, with every effort made to retain the flavor of the original comics, and to provide the reader the experience of finding in the attic a bound volume of the finest non-EC horror covers and stories of the pre-code era. $29.99
Lee: I’ve been waiting for this since I first saw the previews months and months ago. This will be awesome! Pre-code horror still holds up today and there is a plethora of great art within these pages. It’s gonna be amazing. This is well worth the price.
Jim: This is an easy buy for me also. I love all of this material and can't wait to add this to my collection. I think as I get older I can actually appreciate a lot more of what these guys did. 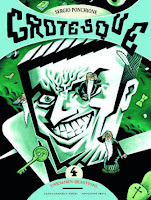 Grotesque #4 by (W/A) Sergio Ponchione
In the concluding chapter of Sergio Ponchione's dreamworld masterpiece, the mysteriously omnipotent O'Blique and the inquisitive Professor Hackensack wrap up all the loose ends, as we see what happened to the three protagonists of the first issue, and what Cryptic City is now like after the cataclysmic events of #2-3. Oh, and we also learn the meaning of life - all in Ponchione's wildly inventive, super-detailed graphics. $7.95 Previews from issue 3 are here.
Lee: This is very, very frustrating to me. This is part of Fantagraphics Ignatz line of books which are magazine sized collections. They are high quality and look great. But, the publishing is quarterly, or less. But most of all, I really want the fancy hc! This is a great story with great art and well worth the money. But I still my my oversized, hc book of this material.
Jim: I understand that sort of frustration. If I want a collection of certain material I will often succumb to buying it in a less than perfect format. Usually down the road it is redone in a format I wanted and I'm too often buying material more then once. Now I try to wait it out. 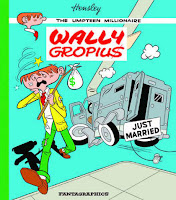 Wally Gropius HC by (W/A) Tim Hensley
Superficially resembling 1960s teenage humor comics, Tim Hensley's graphic novel Wally Gropius is actually an acute satire of power, celebrityhood, and modern culture that tells the story of the titular character, who bears a closer resemblance to a teenaged Richie Rich or a classmate of Archie Andrews at Riverdale High than he does the famous Bauhaus architect whose name he shares. Wally is the human Dow Jones, the heir to a vast petrochemical conglomerate. When the elder Thaddeus Gropius confronts Wally with the boilerplate plot ultimatum that he must marry the saddest girl in the world or be disinherited, a yarn unravels that is part screwball comedy and part unhinged parable on the lucrativeness of changing your identity. Hensley's dialogue is witty, lyrical, sampled, dada, and elliptical--all in the service of a very bizarre mystery. There's sex, violence, rock and roll, intrigue, and betrayal--all brought home in Hensley's truly inimitable style. Created during an era when another well-off W was stuffing the coffers of the morbidly solvent, Wally Gropius transforms futile daydreams and nightmares into the absurdity of capital. $18.99 Hensley belongs to a blog co-op here interesting reading that isn’t all about Hensley.
Jim: This book is not calling to me. Solicitation copy is so unimportant for a periodical I like already and very important for something like this. This sounds like it may have potential, but not $19 potential.
Lee: This is all about art for me. It's appears to be a twisted version of Archie and that's a huge selling point for me. The dichotomy between the clean and wholesome lines and the dirtyness of the story is what's pulling me in.

G.G. Studio
Route Des Maison's Rogues #1 by (W) GG Studio (A) Monni, Cucca, Ciardo
The first part of the four issue Italian sensation, Route is the sexy and surreal satire set in a fantasy Parisian neighborhood that's quite crowded with five brothels competing for control. The tenants are hot and hot-headed, and are caught up in in a five-way battle to make their maison the most powerful of all. Yet it's all fun and games until the slimy mayor enters the picture... and then the girls might have found a common enemy big enough for them to forget their differences and work together. #1 of 4, $2.99 Previews here .. to find the previews, pick ‘read online’ and you’ll get there.
Lee: Who the heck is GG Studio’s? And why are they trying to break into the American market with Italian comics???? But, since I read mostly Euro books these days, this is just what I’m looking for. The art is clean and the story… well I couldn’t read Italian in the previews so I’ll guess it was good.
Jim: It sounds like a great premise, every once in a while I like to take a flyer on something and at $2.99 I'll take a chance.

Hyperion Books
James Bond Adventures Vol. 01: Silverfin HC by (W) Charlie Higson (A) Kev Walker
Years before James Bond was Her Majesty's Secret Servent with a license to kill, he was a boarding school student at Eton. Acclaimed British writer Charlie Higson, working with Ian Fleming's estate, writes an edge-of-your seat thriller that brilliantly plants the seeds to show how young James learns the skills that will eventually make him history's most formidable and suave super spy. Available in Softcover and Hardcover editions. HC: $19.99
Lee: The Bond character is much bigger in England than it is here but that doesn’t mean we can’t enjoy his adventures. But Kev Walker is the real reason I mention this. He’s the artist behind Marvel Zombies and tons of 2000AD stuff. If you’ve never checked out his work, this is a great way to do it.
Jim: Kev has been doing a lot of Marvel work in the Realm of Kings books also. I have always enjoyed James Bond so this is another buy order for me.

The conclusion tomorrow!
Posted by Lee at Thursday, March 25, 2010