The Best and The Rest March 23

I have to do a little political rant, I’m very sad about the passage of the Health Care Reform bill. Not that we don’t need reform, but what was passed pushes us into the social democracy models of Europe and is a vast change from what our country is today. It will not do what is advertised and is more about changing the country then actual healthcare reform. Remember the Patriot Act was very unpatriotic. It is not saying Shazam type of change, but it changes us into a more socialist state and that change will end up transforming the country for the worst. The only thing going for us is we are already bankrupt so this should force the process a little faster to driving us over the brink. Remember no great civilization thought they were failing, I fear this signals the beginning of the end of the USA as we know it. We will not truly know what we have lost until it is too late. I fear I leave my children with less than my parents have left me. 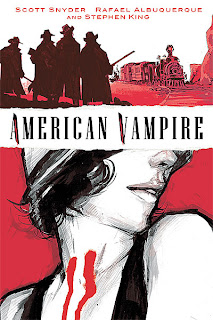 American Vampire #1 – Writer/Creator Scott Snyder, Writer Stephen King, Artist Rafael Albuquerque, Colors Dave McCaig. I loved this book and I have to say that I liked the first half of the book by Scott a little better then the back half by Steve (I heard he likes to be called Steve). The only reason I liked Scott’s side better is because you fall in love with Pearl, you don’t fall in love with Skinner. First off I want to mention the artwork by Rafael and the coloring work of Dave McCaig. Rafael achieved a few things with his work on this book. First off I believe his work has moved up another notch. It was obvious from his work on Blue Beetle that story telling and layouts were already part of his skill set. As time progressed on that book you could see the actual art itself improving. Not that he was ever a poor artist just that he got stronger and more consistent. I thought his work was a little more on the lighter side for the super hero work and was questioning the choice of him on this type of story. I shouldn’t have, his work was outstanding. He has very distinct characters and every person in the book looked unique. I have to think he spent a lot of time on character design and it shows. I have already fallen in love with Pearl from the first story and the countless expressions and body language that Rafael portrayed were excellent. Then add into that the second half of the book where he adjusted the style of his art to achieve a different look, but still totally Rafael. I have to read his interview to learn how he achieved the effect, but both halves of the book are Rafael, but the second half has a heavier feel to it and is grittier as befits the time. In this type of job the work of the colorist to carry the tonal feel of each story can’t be understated. Dave did a great job and achieved keeping each story having its own flavor yet being true to being one larger canvas. The first story by Scott Snyder is called “Big Break” and focuses on Pearl a gal who is trying to make it big in Hollywood in 1925. See my full review here. 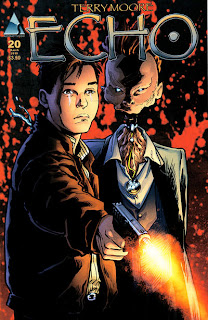 Echo #20 – By Terry Moore. Comics have fought to become more than just comic books and the name of our magazines being comic books is what makes the general populace in America still look down on us. We have tried graphic novels and other appellations but for me the only term to define the growing crop of well written comics is graphic literature. American Vampire, Locke & Key, Scalped and Echo are all books that are on the forefront of being strong well written stories that are being told in words and pictures. This issue by Terry Moore is another example of a beautifully done chapter of Echo. We start with Annie remembering her first sexual encounter with Dillon, only it is Julie having the memory. We have Julie and Ivy traveling back to get Dillon, and Annie’s papers; along the way we hear Ivy explain herself a little more. I’m marveling at how complex and fully developed Ivy has become from being the bad-a** secret agent type to the soccer Mom to the cool confident woman trying to set things right. We learn that Todd is willing to do anything to protect the secrets of Henri up to and including killing his boy friend in cold blood. We have the villain who has been severely mutilated but strangely still alive make his horrific reappearance as he attacks Julie and Ivy. The story is rich with a decent size cast and various moving plot points but it is so well done that issue by issue you are pulled backed into the story line. I know this story has an ending but I hope with are a few years away from getting there.

Other Books of Note

Avengers vs Atlas #3 (of 4) – I make no bones about my love for Jeff Parker’s Agents of Atlas, but in this mini-series about time travel and such the use of the original Avengers is every bit as well done as the Agents. From the Hulk attacking to trying to figure what is happening to all of them the book is a great read and highly entertaining.

Batman#697 – Tony Daniel as artist and writer has some growing to do and his reach exceeded his grasp as this six part story had way too many moving parts and too big of a cast for his skill set. The funny thing is the ending of the book worked pretty well, but Catgirl, I don’t know about that Tony and how does it fit with Sirens?

Battlefields #4 (of 9) – Firefly Part 1 of 3 – The last Battlefields story had an arc about Sgt. Stiles, who commands a tank during WWII and because Ennis wrote him with a thick Scottish accent (I believe) it was hard to read. Oddly enough I have actually grown fond of it now and this fooking arc of the book looks greet. The German tanks were truly superior to anyone else’s in the field and at times you have to wonder if the German would have been less ambitious if they would not have ended up conquering the world. Battlefields is always a great read and this first chapter starts off the next arc about the tank wars towards the end of WWII in excellent fashion.

Brave and Bold #32 – Another strong story by JMS and fantastic artwork by Jesus Saiz. I’m enjoying this run on Brave and Bold as each issue is a good story. This one had the odd pairing of Aquaman and the Demon and it worked very well. JMS should give a class on how to just tell great stories and be able to do it in one issue. This type of book is great for these “lost tales of the DCU”.

Fade to Black #1 – Not the strongest story I have ever read and the art was south of bad. This was disappointing as I normally enjoy writer Jeff Mariotte’s work, but the art dragged the book down and the story would have to have been superb to keep me getting this mini-series.

Farscape #5 – This book is such a great book. I’m really enjoying seeing the “actual” continuity of this show move forward. John and the rest of the crew continue to grow, but build upon the past. This is the first TV show comic that I have enjoyed so much.

Green Arrow #31 – I liked this issue and thought it was great for someone who skipped the Rise and Fall Special and Cry For Justice as it filled in all the blanks for a regular GA reader. I also enjoyed the confrontation with Connor. What drove me nuts is that the way Ollie escaped Hal, Barry and Dinah was totally different from the book I read last week. Those inconsistencies in what is supposed to be an overall story arc are unforgivable. Also the whole portrayal of Connor has me confused as when I last was paying attention to this character he had been totally changed into a healing factor Wolverine light type of hero who could no longer shoot a bow and arrow. Did I miss something or did DC just ignore a bad change to Connor.

Green Hornet #1 Year One – A nice surprise as I had not planned to get this series, but apparently this is the first Green Hornet and Kevin Smith is writing the current Green Hornet and there is an advertisement for a future Green Hornet as well as some Kato series. Dynamite has jumped in feet first with the Green Hornet and this origin tale by Matt Wagner and Aaron Campbell was very enjoyable and we are just at the beginning. It was a little choppy as we got to actual Green Hornet action but jump around in time as we seen the early years of Britt and Kato.

Green Lantern Corps #46 – Peter Tomasi and Patrick Gleason do great work on this title and this final Blackest Night chapter leading into Blackest Night #8 was no exception. I loved the battles between Ice and Guy and the fight between Kyle and Alex was equally well done. The use of the Tholian Web from Star Trek was very cool as well as the whole battle with the Anti-Monitor. Riotous and fast paced action from cover to cover.

Joe The Barbarian #3 (of 8) – I was a little lost with some of the characters this issue, but the story is very effective. Grant is weaving an excellent story about Joe and his journey to try and save his life. Sean Murphy’s art is outstanding and this book should garner a lot of attention.

Marvel Boy The Uranian #3 (of 3) – It is a shame this series is over as I was enjoying it a lot. I love how Jeff Parker has managed to honor the past of the character and make the retro-con feel like it was the true story all along. The reprints with Bill Everett’s art are a treat also. Bill was an amazing artist.

Siege #3 (of 4) – Note to self, do not read Bendis dialogue on the same evening as reading a book like American Vampire. I’m enjoying the whole Sentry is going crazy, but boy was the dialogue stilted and heavy handed. Also the President was made to sound like a moron and this is from people who appear to love the guy. Also blowing up New Asgard was a WTF moment after JMS’ highly praised and touted run just restarted the whole thing. Was that Marvel’s little farewell present to him? Also Norman wearing some sort of Goblin mask under his helmet was odd. The overall story idea is okay the execution of that plot is often a miss with a few cool scenes thrown in here and there.

I find myself drawn more and more to solid story telling more than art or wow moments. I appreciated great art paired with strong writing, but for me strong writing can carry weak art, but strong art and weak writing is a passing memory soon forgotten after I read it.