While there's a wide gap between the top of the List and the bottom, most of the middle is really fairly equal. The superheroes seem to get relegated to the middle because of the nature of superhero books being so static while aping the motions of change. I come in jaundiced, I suppose. Some the stuff at the bottom, though, is close to being dropped altogether. More trades again this month filling out the List. Love the winter sales.
1

. Madame Xanadu 20 - The cover is really pushing this one to the top in a very strong field of top ten. It's pure Hadley goodness. I would have like to have seen her on the interior art, too, but the Joelle Jones work is more than good, albeit a very different style. Less pretty, I guess. 'Course, that it has a woman who's just had sex appearing actually naked is an element of realism I appreciate. The only negative was Nimue saying to a teen Merlin "Easy there, kid". That was a far too modern expression that abrubtly took me out of the pre-King Arthur England we were supposed to be inhabiting.

2. daytripper 3 - Still hitting on all cylinders. Bras ends up dead at the end, again, but this time we have a character who was in the previous issue as a lover and possible love interest returning. This time she's an ex-girlfriend and possible inspiration for suicide. The puzzle of how all these stories connect is fascinating, but the stand alone nature of each of the stories is a fine example of short story writing.
3 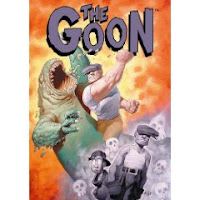 . The Goon: My Murderous Childhood (And Other Grievous Yarns) TPB 2 - Eric Powell's series has been a sporadic buy in TPB form for me. I actually started with volume 3 a couple years ago when I bought it on a whim at the Baltimore ComiCon and had it signed by Powell. This one appeals to my like of origin stories, but, really, what's not to like about any of the Goon stories? The mere fact that Franky's eyes make me think of Little Orphan Annie makes me smile every time.

4. Northlanders 25 - Quite possibly the lowest spot for this series since I started the List, but that's just because of all the good stuff I got this month. Plus, Wood's work here inspired me to check out a couple of his other works in TPB, which are noted further below. The battle for early, Medieval science, as against superstition and traditional bravado continues with predictably violent consequences. Good thing we have courts for this sort of thing instead.
5. Spaghetti Brothers vol 1 - Courtesy of the Martin Private Library comes the Spaghetti Brothers. This is the story of the Centobucchi family's five siblings, three boys and two girls, with one of the boys and one of the girls being twins. There was a lot about this that reminded me of Will Eisner. Some of it is that this volume is set in the '20s, I think in NYC. The art reminded me of Eis

ner, though, with a sort of realism to it that turned into exaggeration at certain moments. The tight focus on the family, told in a series of 8 page vignettes, reminds me of Eisner's short story work, as well as his longer form work. Written by Carlos Trillo and pencilled by Domingo Mandrafina, it was originally done in Spanish. That's one of two slight problems with it. The translation to English results in a formalized style of English at some times and some questionable slang at others. I doubt Italians in the 1920s were referring to one another as bro, even if they were actual brothers. The other slight problem is that the five siblings are such archetypes. The eldest son is a gangster. The youngest son is a cop. The boy who's a twin is a priest, his twin sister a married mother of two. The remaining sister is an actress in silent films. All of them have some secret or other. An enjoyable read within its mileu.

6. The Walking Dead 70 - The hint of what's to come, or rather the secrets to be revealed, is tantalizing. An apparent refuge always has something to hide in this zombie infested world, as our heroes know all too well. Davidson, Davidson, Davidson! Nah, nah! Heh.
7. T

he Question 37 - Ah, fond memories indeed. O'Neil's The Question 1-36 is, as noted previously, one of my favorite series runs ever. Not only did this Blackest Night tie in live up to that series, it moved it forward seemlessly into the Blackest Night. Of course, having O'Neil, along with Rucka, writing probably helps. Despite the galactic class threat of a dead Vic Sage up against the distinctly non super powered Rene Montoya and Lady Shiva, the fight amongst them was believably well matched.

8. Scalped 35 - As Jim mentioned, this is a wonderful stand alone story of an elderly Sioux couple living on the Rez. It's obviously set in the world of Dash Bad Horse and Red Crow, with the latter's casino making a cameo appearance, but these two have naught to do with that world of hyper violence, sex and drugs that surrounds Bad Horse and Red Crow. There's more of the poverty of the Rez and the hard scrabble lives of the everyday people living there. It's also a tale of survival with an amusing, unexpected fresh start for our protaganists.

9. Atomic Robo: Revenge of the Vampire Dimension 1 - A new mini-series. Same old fun. Coincidentally, at the same Baltimore ComiCon that I got Powell's autograph, I got Clevinger's autograph on the first issue of the first mini-series, which hadn't even been published yet at that point. Can't wait to see what outsize fun this series brings.