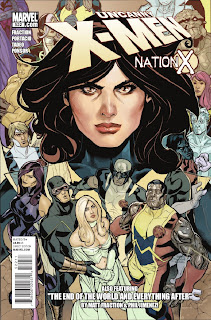 Format 32 Pages of Story and Art

Okay Kitty Pryde is back, but she can’t become solid and they put her in some sort of hyperbolic chamber. She was brought back by Magneto who used his power across light years, read that again light years and then he collapses and the medical staff has him on a table trying to help him.

I wanted to try and get back into the X-Men but this type of crap just stops me at the front door. We want Kitty back, okay you have her, but not really as she can’t talk and is permanently in a phantom like state. Then the method to bring her back is such a ridiculous extreme use of Magneto’s powers that I can’t even believe it in a comic book.

You want to bring back an old fan give me something I want and at least make it plausible in comic book terms. Certain writers in comics today think anything goes because it is a comic. Cyclops eye blast are not only destructive but when he wishes they can heal, he just never knew it before Emma unlock the part of his brain that was still afraid of his power, the Beast can actually transform to his human form now as the mutation has continued to progress, Bobby can actually become ice and reform if broken, no matter what it is, it is okay because it is just a comic. This destroys any internal logic and instead of making comics fun it disrespects what has been established and what has gone before. Of course this allows writers to pull any damn rabbit out of a hat to fix a problem. In this case Magneto can reach across light years to bring back the missile and X-scientist can hypnotize satellites around the world.

The problem with that method is now nothing matters and no internal logic exists and I can never even try and figure out anything when a solution is pulled out of the writer's a**.