What I’m Getting Wednesday March 31

First a little background information on what is happening with the blog. I’m hopeful that we will see Jamie’s voice added to the blog soon and I have the potential for a sixth voice to be added to the choir. We are looking to make Comics And have two columns per day, at least on weekdays.
The end of the month is usually a killer week for me, but the five week month has spread out everything. I guess I get a little like Pavlov’s dog and hearing the end of the month bell had me looking for more than this short list, but some good stuff is here and a major book hits the stands. 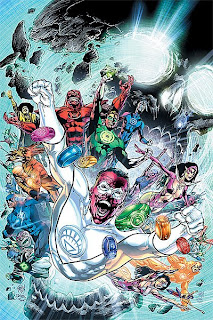 Blackest Night # 8 (of 8) hit the stands this week. This is one of those books that will make me want to run to the store and read it right away. One of the things that Johns has done so well with this story is make it such a huge canvas that it has impacted a lot of the DCU, yet at the same time its impact will be felt profoundly in the GL side of the DCU and in an examination of what life and death mean in the DCU. After this is over the Guardians of the Galaxy are gone as far as I can tell. We now have multiple lantern corps and have hardly touched on where the Indigo Tribe came from. Will Sinestro end up as a White Lantern and finally achieve some sort of redemption or will he succumb to his controlling self? Obviously the heroes that were alive and taken over by black rings make it back, but what about Hawkman, Hawkgirl, Tempest, Damage and many others, do they all come back, just some? What will be the new status quo for Hal, Guy, Kyle and John Stewart? I see this book as having long lasting implications in the GL side of thing and impact the greater DCU in its implications about life and death. It is a hard line to walk making the event big, but not so big as to throw every other storyline that is ongoing into disarray. 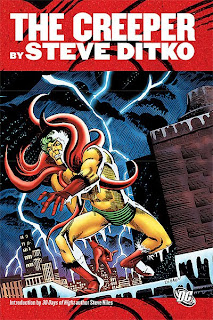 The slightly delayed The Creeper by Steve Ditko Hard Cover Collection comes out also. When Ditko left Marvel he went to DC and while the Creeper was short lived it was when Steve was at the absolute height of his artist abilities. The Creeper is an odd character as befits Steve who has always been an enigmatic figure in comics and also a major influence in comics. I don’t know Steve and even people who say they know him I have read are full of crap. I have my doubts about Blake Bell and the book by him I purchased, but I’m so hungry for more about Steve that I read various sources and then try to filter out what may be fluff or pure conjecture. Still this collection is long overdue. 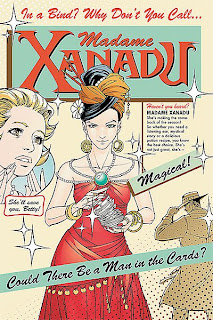 The rest of DC is a mixed bag with Adventure Comics #9, Detective Comics #863, Gotham City Sirens #10, Justice League of America #43, Justice Society of America #37, Outsiders #28, Web #7 and Wonder Woman #42. Vertigo delivers Madame Xanadu #21 and Wildstorm brings Astro City The Dark Age Book Four #3 (of 4). Of all of these books I love Madame Xanadu. Matt Wagner has been telling great stories about her and I have a crush on Amy Reeder Handley’s art on this book. It is flat out some of the best art being published in comics. It has a fluidity to it that is just beautiful and the lines are so clean it is just stunning work. Of course I shouldn’t overlook Richard Friend who is inking the work and allowing Amy’s work to shine. 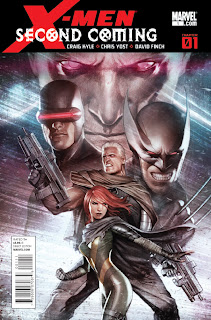 My Marvel list for this week was darn close to being non-existent with only Fantastic Four #577, Realm of Kings Inhumans #5 (of 5) and X-Men Second Coming #1. Years ago the X-Men were one of my favorites. The Roy Thomas and Neal Adams issues were possibly the best comic on the stands. Once the book was cancelled and then revived we got a bunch of new characters and the Claremont/Byrne era, but for many years only the Grant Morrison run has really caught my attention. I tired Uncanny last week and that was a dismal failure and why I’m checking out Second Coming the amount of chapters that Marvel wants me to buy is a pretty big commitment especially given how disappointed I have been in the X-verse. If this issue is good I will continue on, if not I will skipping this mini-event. 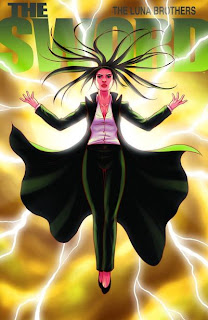 The other category brings one book closer to its end as Sword #23 is the penultimate issue of the series. It is funny because while I have enjoyed the series I have actually become less and less of a fan of the Luna Brothers, yet still curious about their work. I think they need to hire an artist to work on top of their layouts and designs. We also have what is my last regular book I get from Zenoscope ending with Escape from Wonderland #6 (of 6). Their good girl stuff went from fun to boring, the Wonderland trilogy went from very good, to good and this last part has been okay. We also get Cowboy Ninja Viking #5, Incorruptible #4 and GI Joe Cobra II #3, which is no longer a mini-series and has been given unlimited series status, which is great news as I love GI Joe Cobra.
I told you it was a small week for me, but I won’t complain that much as it gives me more time to read the many, many other things I have in my house to read. Plus when I read other stuff the rest of the crew at Comics And often benefits when I mail stuff on.
Posted by Jim at Monday, March 29, 2010