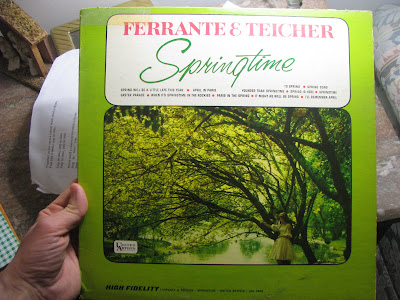 FINALLY!!!
(nuff said)
The past few days have been sooooo nice! The snow is gone and the daffodils are coming up. The temperature has been pleasant and the sun has been warm. When I was down in Richmond (about 150 miles south of here) on Saturday, the birds were already singing in the trees and the buds on the trees were starting to bloom. Maryland will catch up with Virginia soon enough. If you had been as snow-weary as we’ve been this winter you would understand my enthusiasm!

Speaking of enthusiasm, “Wicked” was AWESOME!!! I cannot recommend this musical enough. It was a fabulous show, which clocked in at three hours with only one 15-minute intermission. The first time I recall hearing about Wicked was a review by Andy Runton (creator of Owly – one of my favorite comic series) after he saw it in Atlanta.

Atlanta, that’s where I used to spend my spring breaks back in college. No beaches for me – I’ll take the campus of Georgia Tech (where I would visit my best friend). It was usually the second week of March (well before spring) and it was amazing that as soon as you hit the Georgia border the green would just be everywhere. Typically, the temperatures would be in the low-80s that week. The funny thing is when my friend had his break two weeks later, it would usually be wet and much colder back in Virginia. So, his spring break wasn’t ever as nice as mine was weather-wise.

My daughter and I saw Wicked at the Landmark Theater in Richmond. 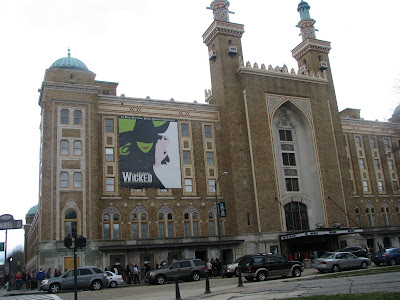 It can hold around 3500 people and it was PACKED! We were located in the Grand Tier area (Section F). I think the seats would have been perfect, if I had been about 20 feet closer -- I couldn’t see the actors’ faces well enough. However, it didn’t distract me from enjoying the show. I was mesmerized almost immediately. We’ve had the soundtrack of the original Broadway cast around the house for the past few months, but I could never get into it much. I didn’t realize the amount of plot and dialogue that surrounds the music. Now, I that I’ve seen it in person and know the context, I love it. I listened to it at least five times Monday at work.

The story is about Elphaba (the Wicked Witch of the West) and Glinda BEFORE Dorothy arrives in OZ. Elphaba is born green and is immediately rejected by her father (head of the Munchkin Land) based on appearances (He doesn’t even realize that she is the product of an extra marital affair of his wife and a traveling salesman with some green elixir.) Her mother dies giving birth to her sister as a result of her father’s insistence that her mother take lots of milkweed to prevent another green baby. Due to complications, her sister is born crippled. Elphaba goes to college to watch over her sister Nessarose and becomes roommates with Galinda (before she changes her name). They loathe each other at first as depicted in the song “What Is This Feeling?”

The actress who played Elphaba for our performance was Anne Brummel, who was listed as the standby. She was great and I even like her voice better than the original played Idina Menzel. Her voice is slightly lower, making it easier to distinguish between her and Glinda when they sing together. There are no warts on this witch. Green is beautiful.

The music is spectacular and the way the themes of the songs thread through the show and dialogue is incredible (like when Elphaba sings “I’m Not That Girl” and later Glinda sings a version of it). The songs can be bouncy, moving, and some have very dark overtones – after all this is the story of how Elphaba becomes “Wicked”. There is also something sinister going on in OZ – the animals are forgetting how to speak.

The story has intrigue, romance, humor, and great character development. It also explains the origins of the Scarecrow, Tin Man, and Lion as well as the Ruby Slippers, the flying broom, and flying monkeys. I don’t want to give too much away (although I’m sure you could look it up somewhere else), but you really need to experience this yourself. I will say that there is much more going on than what you saw in the film and appearances are not what they seem.

I really like the songs “Dancing Through Life” and “For Good” (which I finally understand now), but my favorite has to be “Defying Gravity”. During that song Elphaba actually flies (The sets are really cool) about 40 feet (or more) into the air. Here is an excerpt(based on the post preview the verses may get all smashed together):

Something has changed within me
Something is not the same
I'm through with playing by the rules
Of someone else's game
Too late for second-guessing
Too late to go back to sleep
It's time to trust my instincts
Close my eyes: and leap!

So if you care to find me
Look to the western sky!
As someone told me lately:
"Ev'ryone deserves the chance to fly!"
And if I'm flying solo
At least I'm flying free
To those who'd ground me
Take a message back from me
Tell them how I am
Defying gravity
I'm flying high
Defying gravity
And soon I'll match them in renown
And nobody in all of Oz
No Wizard that there is or was
Is ever gonna bring me down!

(Thanks to Andy who told me about this link last night that you can check out for yourself!)

Interestingly enough, the last time I ever remember being in that theater (then called the Mosque) was when I saw Dallas Holm and Praise back in the early 80’s. His most famous song is “Rise Again”.

Go ahead, drive the nails in My hands;
Laugh at me... where you stand.
Go ahead, and say it isn't Me;
The day will come... when you will see.

Go ahead, mock My name;
My love for you is still the same.
Go ahead, and bury Me;
But very soon, I will be free!

(Final refrain)
'Cause I'll come again!
Ain't no power on earth can keep me back!
Yes, I'll come again;
Come to take My people back.
I find the songs coincidentally similar. They are both bold declarations about flying/rising and no one is going to bring/keep them down. The music and lyrics of Wicked are by Stephen Schwartz, who also worked on Godspell (a musical about the Gospel of Matthew), which I saw recently. That’s a really good movie too (especially when you see them on top of the World Trade Center) – although the ending is lacking something very important to the story. Who knows maybe “Rise Again” influenced “Defying Gravity” is some subconscious way.

This day, March 20th, in addition to being the first day of Spring also marks the 30th anniversary of me breaking my leg (no I wasn’t an actor) back in the fourth grade. I broke my left femur (strongest bone in the body) and was in traction for weeks. Until they turned my bed around I could only see the hospital parking lot from my window. When I finally saw the flowers of spring…I cried. I hadn’t been outside in so long. One of my many rotating roommates introduced me to Avengers 196, which has a really great green cover! This first Taskmaster appearance (issues 195 and 196) is one of my favorite Avengers storylines. 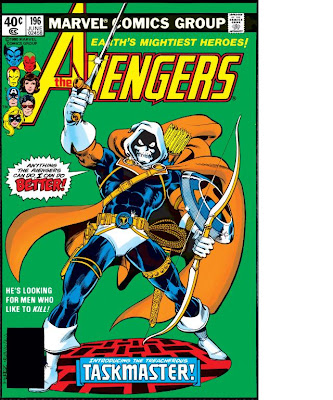 Enjoy this wonderful green season! I know I am already.
Posted by Matthew at Saturday, March 20, 2010