Black Panther the Man Without Fear! #513 - A Review 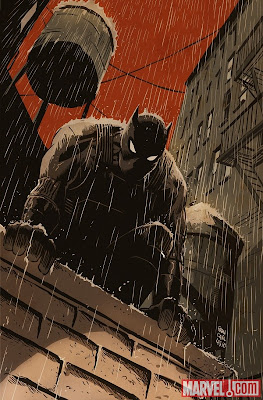 So Shadowland’s over, now we have this little curiousity. Following in the footsteps of turning the Hulk’s book over to Hercules, we get the rather unlikely set up of the Black Panther, an African Monarch/Superhero taking over Daredevil’s position as Hell’s Kitchen’s resident superhero.

A great deal of the issue is devoted to explaining and justifying this move. Over in his books, the Black Panther destroyed all of the world’s vibranium, his country’s major natural resource, in a war with Doctor Doom. Or something.

Anyway, he’s feeling a bit down on himself, so when Matt Murdock asks him to take care of his neighborhood in his absence, he’s inclined to take him up on the offer as a way to test himself. Black Panther says goodbye to his friends and family, cuts himself off from his former life, and goes to clean up the streets.

While this isn’t done poorly or anything, it didn’t completely dispel my feelings that it is a bit weird to see Daredevil asking Black Panther, a King and a superhero he does not have the closest of ties with, to watch his neighborhood when he leaves. However, once you accept the premise and move on, this is a very promising comic book series.

The issue wisely opens with an action sequence of the Black Panther cleaning out a warehouse full of goons. It’s tense, exciting, and extremely well executed, as are all the book’s action sequences. Once we’re through with a flashback of how the Black Panther got there, we’re given the parallel story of how both he and a new crimelord are setting themselves up in the power vacuum of Hell’s Kitchen. Panther creates a new identity as the owner of a diner, while the crimelord, Vlad the Impaler, demonstrates that he can be reasonable and ruthless in equal measure. Throw in a few brief introductions to our new supporting cast, and we have our first issue.

All told, its good stuff. You’ve got an interesting new status quo to follow and once you accept it, it works very well. Using the similar paths of the Black Panther and Vlad both introduces their characters and shows us how this new Daredevil-less Hell’s Kitchen operates. If there is a real weakness, it is that the book tends to get a bit wordy at times. Word balloons are often bursting at the seams. The author, David Liss, comes from the world of novels, so this is no surprise. However, there are just as many sequences in the book where he knows when to shut up and let the art do the talking. I’m willing to chalk this up to his newness to the medium. That said, I believe that this is the author’s second comic book and if so, he should be enormously proud of it. This is a good issue by any standard, but for someone still learning the ins and outs of the medium, it’s downright amazing.

The book’s real draw, however, is the art. Francesco Francavilla is nothing short of a revelation. I know he did the Jim Gordon back up strip in Detective Comics, but this is extraordinary. He effortlessly captures the kind of noir atmosphere that the book is trying to create. His storytelling is impeccable and his action sequences look incredible and are easy to follow, even when using some unique panel design. And the Black Panther’s costume, essentially all black with a flack jacket and the traditional Black Panther mask, could have looked stupid or boring in another artist’s hands, but Francavilla makes it look regal and intimidating. This is easily the best looking comic book I’ve read all year and on the strength of this issue and the Detective Comics back up alone, I’m prepared to say that Francavilla is one of the best artists working in comics today. Period. Full stop.

Black Panther: the Man Without Fear is not perfect, but Liss and Francavilla have given us a fairly strong start. There is a lot of potential here and I’m eager to see where they go.
Posted by Greg at Saturday, December 18, 2010