Lee: Wahoooooo, Gwen is picking this month. I can no longer be blamed. INNNN-O-CENT. That's me.
Gwen: Don't listen to Lee - he sent me his picks waaay ahead of time. 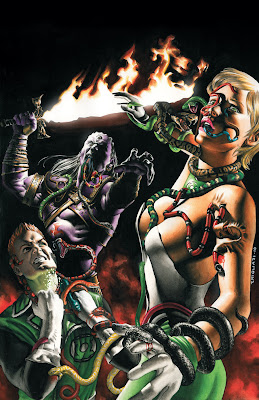 Written by PETER J. TOMASI
Art by FERNANDO PASARIN & CAM SMITH
Cover by RODOLFO MIGLIARI
1:10 Variant cover by FELIPE MASSAFERA
In this prelude to the “War of the Green Lanterns,” the battle with Zardor and his Green Lantern Corps reaches its epic conclusion! Hold on to your willpower, because events in this issue spin directly into the coming war! 32 pg, FC, $2.99 US
Lee: NO IT ISN'T A BOOB COVER!!!! I don't make the costumes I just report on them.
Gwen: Oh good more variant covers.... because we can never get enough of those. I've been okay with this series thus far but still nothing I've been exceptionally impressed with. This cover is pretty awful though. 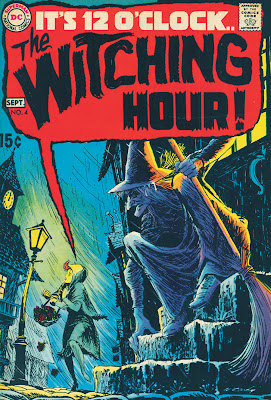 ESENTS: THE WITCHING HOUR VOL. 1 TP
Written/Art by various
DC’s mystery/horror series THE WITCHING HOUR is collected for the first time in a value-priced package featuring issues #1-21! This volume features artwork by comics luminaries including Neal Adams, Alex Toth, Bernie Wrightson, Michael Wm. Kaluta, Wallace Wood, Gil Kane and more. 544 pg, B&W, $19.99 US
Lee: This is a great collection of Bronze age horror stories at their best. It gets a little old if you try and read 500+ pagse at once, but taken in 2-3 issue increments it's great stuff. And, as always, it's filled with great art.
Gwen: I'm not familiar with this so I'll have to take Lee's word that it's well done. Unfortunately the solicitation does nothing in regards to interesting someone unfamiliar with the work. 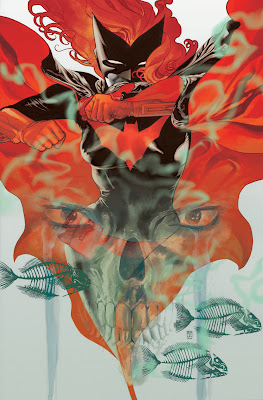 Written by J.H. WILLIAMS III & W. HADEN BLACKMAN
Art and cover by J.H. WILLIAMS III
1:10 Variant cover by AMY REEDER
In the 5-part “Hydrology,” Batwoman faces bizarre new challenges in her war against the dark underworld of Gotham and new trials in her personal life as Kate Kane. She quickly finds herself in the deep end facing truths about her past and her future. Who – or what – is stealing children from Gotham’s barrio, and for what twisted purpose? Can she train her cousin Bette Kane (a.k.a. Flamebird) as her new sidekick? How will she handle dark revelations about her father, Colonel Jacob Kane? How is she dealing with the supposed drowning of her sister, the villain known as Alice? And why is a certain government agency suddenly taking an interest in her? The road to the answers begins here! 32 pg, FC, $2.99 US
Gwen: Hey! I though Amy Reeder was doing more than cover work for this book... maybe that's coming up in subsequent issues. *sigh* Not that JH Williams art isn't very nice but I am biased.
Lee: I can't help but feel a certain amount of apathy about this title, outside of Amy's artwork. It's years late and I can't help this is being released to flood the market with even more Bat titles. It'll take an issue or two for me to get really excited about it. 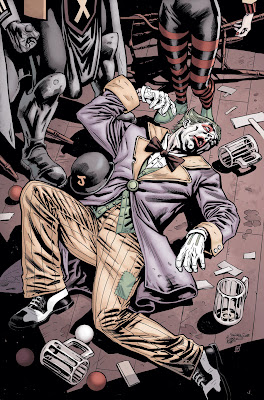 QUIRE #5
Written by PAUL CORNELL
Art by JIMMY BROXTON
Cover by YANICK PAQUETTE
Jarvis Poker, the British Joker, has been receiving death threats. But who would want to hurt such a sweet old villain? The lives of the Knight, the Squire and the Shrike take a turn for the cold and deadly, as fear casts its shadow over London town. Can the Super Heroes of Britain work together to resist the onslaught of gritty realism? #5 of 6 • 32 pg, FC $2.99 US
Gwen: I have to wonder - was this made into a monthly series because Law&Order UK came out? I sometimes wonder at the idea of making cultural doppelgangers of different things - it seems an odd, if not somewhat entertaining practice.
Lee: This is just an extension of Batman Inc except it's in a standalone title. 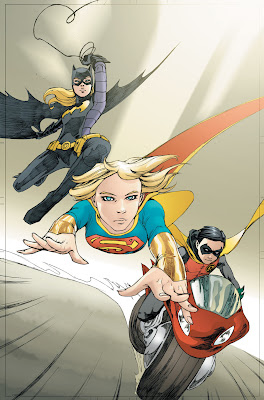 Art by BERNARD CHANG
Cover by AMY REEDER & RICHARD FRIEND
Continuing the new arc by the freshly minted creative team of writer Nick Spencer and artist Bernard Chang! Someone has set his sights on killing the next generation of heroes, and his latest targets are Robin and Batgirl! Who is this new foe, and how is he connected to some of Superman’s deadliest foes? Supergirl had better find out fast, before it’s time for another Bat-related R.I.P. story! 32 pg, FC, $2.99 US
Gwen: I really hope the new creative team 1. works out on this book and 2. stays on the book for more than a handful of issues. It would be really nice to have some stability on this book.
Lee: I am in shock every time we pick this book because I can't believe it is still around. Excluding the current team, whose ability to make this property interesting are unproven, this book has been universally derided as awful. Marvel has started canceling under performers, it would be nice if DC would follow suit.... and then give Spencer a better title to work with. 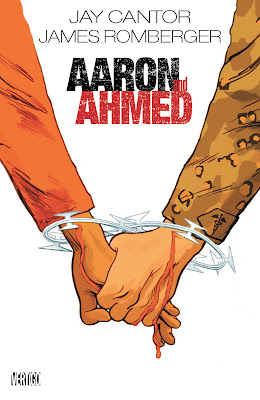 N AND AHMED HC
Written by JAY CANTOR
Art and cover by JAMES ROMBERGER
“What causes terrorism?” After his fiancée dies on 9/11, the question plagues Aaron Goodman. It makes him give up his career as a doctor to become an interrogator at Guantanamo Bay. It leads him to meme theory, as he wonders if there could be a cold science behind the conversion of people into suicide bombers. And ultimately, it brings him to Ahmed, a Gitmo prisoner who promises the answers to all of Aaron's questions, and in the process, he’ll take Aaron from Guantanamo Bay to the jihadist camps in Pakistan, back to Ground Zero in New York City.
But where do Ahmed’s real loyalties lie? From where did that loyalty spring? To answer that, Aaron will have to reexamine everything he believes, and stare down one of the most compelling questions of the 21st century. 144 pg, FC, $24.99
Lee: This looks very interesting and should get lots of attention. Both negative and positive attention I am sure. It's worth checking out.
Gwen: It's always interesting to see how these types of stories go. It'll either be amazing and a new way to view a tragedy or it'll be hated. Or as Lee said it may be both. Regardless I hope it's well done - it has potential - rather than hyped up because of the touchy subject. 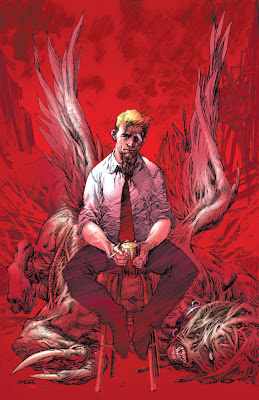 Art by JOHN RIDGWAY, TOM MANDRAKE, RICK VEITCH, BRETT EWANS and others
Cover by JIM LEE
The very first Hellblazer collection is back in a new edition that includes John Constantine’s early appearances in SWAMP THING #76-77 along with HELLBLAZER #1-9. This is the first of a series of new HELLBLAZER collections that put all his adventures in reading order, capturing Constantine at his youthful, anarchic best. 304 pg, FC, $19.99
Lee: This really deserves the fancy hc treatment but I'll take what I can get. I haven't read these in years but I remember liking them and I bet they have gotten better with age. My age, not theirs.
Gwen: Oooo shiny. John Constantine is a great character and it's nice to see the early stories put together like this. Of course I first got into the character in the Books of Magic so it would be cool to read his Swamp Thing appearances.