This post has been in the queue since August and it's been my security blanket "buffer" post. I hate to let it go. So long Ziggy -- I'll miss you!!! 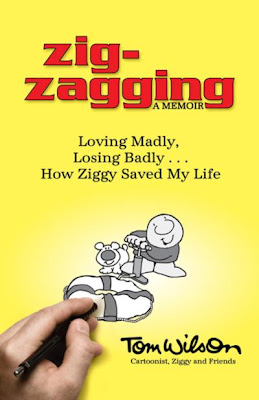 Whenever I go on vacation, I usually pack way too many books to read. There’s just this optimism that there will be plenty of time to wile away the hours reading. I don’t think I’ve had a summer like that since I was in college (I remember when I bought a ton of early Marvel Team-ups in Kansas and when I collected all the Ian Fleming James Bond novels one summer). So, this year I reduced my non-Bible reading book packing to a minimum: Green Lantern Archives #5, Devil Dinosaur Omnibus, Marvel Adventures Super Heroes (for interview research), and one non-comic book.

Other than a few issues of Super Heroes, the only one I completed was the non-comic, which was actually a memoir. Webster’s defines memoir as “a narrative composed from personal experience”. I looked up the term because I was curious how it differed from a biography, which is more of a complete history of someone’s life. Well, this book certainly lived up to the definition.

The full title is zig-zagging: A Memoir: Loving Madly, Losing Badly…How Ziggy Saved My Life by Tom Wilson. Tom is actually Tom Jr., or Tom II, the son of Ziggy creator, Tom Wilson (the original). Ziggy is that lovable round-headed comic strip icon from the funny pages and the greeting card aisle. The book is peppered with Ziggy illustrations and a few family pictures. The narrative is very free flowing and easy to read with plenty of thoughtful moments, including a few super-hero references.

The book is structured around a drive Tom is making from Cleveland to Cincinnati. Along the journey he flashbacks to various parts of his life up to this point. I’m not sure if all the physical events of the journey (the storm, the cup of coffee, the bumper sticker, etc.) actually occurred for real during one particular drive – maybe it was a compilation of several trips. I don’t think it’s really important as the road trip is more of a device to tie into the narrative of what he’s experienced and he uses the road/journey metaphors to enhance his tale. Just as the title describes it’s a tale of love, loss, and salvation.

While the book is divided into eight thematic sections, you can’t always compartmentalize your life; consequently, most of the themes intertwine throughout the narrative. The first section is “Backward” and it primarily deals with him and his father. The account of how his Dad set him up with his own drawing area was wonderful, and it really helps the reader experience how he must have felt at the time. Even more fascinating is the Batman and Robin relationship they have with regard to Ziggy. He’s being trained to take over and eventually has to assume full responsibilities on Ziggy, becoming the Dick Grayson Batman so-to-speak. This isn’t some clever insight on my part, but actually the way Tom describes the transition himself.

The second section “Upward” deals with the beginning of his marriage to Susan and the start of his professional career, including the creation of his short-lived “Ziggy-esque” character Ug, the caveman. No, I don’t remember him either. There’s also some more great Batman and Robin insight in this section. It seems like just about everything is going Tom’s way when tragedy strikes.

The third section “Downward” chronicles his wife’s seven-year battle with breast cancer. This is really the heart of the book and it’s heart wrenching heavy stuff. The account where they’re in the shower together shaving Susan’s head prior to her first Chemo treatment was especially moving. She didn’t want cancer to claim her hair, so she took it first. From his writing, Susan must have been an incredibly strong woman with a huge reservoir of faith. By all implications (Scripture paraphrases and the like), she must have been a born-again Christian.

The next three sections “Heavenward”, “Inward”, and “Wayward”, chronicle Tom’s post-Susan existence. He’s angry with God for taking Susan away. He wants to deny that God exists, but to do so would mean no Heaven for Susan. It’s all very honest and raw. He starts to take on a Superman type persona as he throws himself into his work, getting a huge lead-time on his commitments. Meanwhile, he starts to get involved in an up-and-down relationship with a woman whom he calls “Lois”, who is really not the right person for him, especially at this time. She also causes conflict between him and his two sons. Along the way, the depression kicks in and he’s almost totally incapacitated. The accompanying Ziggy strips help illustrate what he’s going through.

In the last two sections “Outward” and “Homeward”, Tom gets his life back on track. The terrorist attacks of September 11th really helped him with his depression and self-pity. He also seems to regain his faith in God, although the specifics are not really explained. The book concludes with him arriving home in time to watch Spider-man with his two boys, while he draws Ziggy. He’s come full circle in away, even though the roles are now reversed. His Dad used to do his drawing while Tom was watching Godzilla.

I hope I’ve given you enough of the flavor of the book for you to try it out sometime (maybe get it from the local library like I did). It’s a very personal story and in many parts painful, but there’s plenty to learn from his experience and lots to think about on the journey. I really like how he uses the Batman and Superman themes to describe some of his situations and of course the Ziggy cartoons are great. The narrative is well constructed around the “drive” home. I enjoyed it quite a bit and would eagerly reread it one day.

I do have one main quibble with the book. It’s partly billed as an inspirational book and there certainly is a lot of talk about God. However, unless I missed it, there is no mention of Jesus Christ anywhere. Considering the evidence provided about his wife’s faith, I can’t understand why Jesus is absent. It reduces his reconnection to faith in God as something a little more vague or “new agey”. Still pointing someone back to God is a good place to start, even if he doesn’t take you quite far enough…
Posted by Matthew at Saturday, December 04, 2010