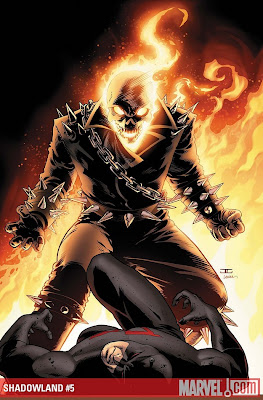 So Shadowland is over and it ended much like it began, as an uneven mess of unrealized potential.

Shadowland was billed as Daredevil’s fall from grace and potential transformation into a villain. Given everything that’s happened to Daredevil thanks to his last 20 creative teams, this story made a fair amount of sense.

Basically the story goes something like this, Daredevil snaps and kills Bullseye, so he gets possessed by a Devil and fights New York’s superheroes until Iron Fist punches him so hard he gets better and dies, but not really. Actually, that sounds pretty cool. The execution isn’t quite there though.

The consequences of being in charge of the Hand, namely that a horrific demon would take him over if he became corrupt, was never really given the appropriate build up or focus in the run up to Shadowland or in the first issue. Thus, when Matt kills Bullseye and becomes possessed, it felt more like a cop out than a tragic consequence.

The final issue itself has a lot to recommend about it. There’s a pretty radical fight between a possessed Daredevil and Ghost Rider and, as I may have mentioned earlier, Iron Fist punches Daredevil so hard he forces him into 4 pages of self introspection. However, like the series itself, there’s a lot of problems here. Those 4 pages of introspection are painfully on the nose. The Beast stuff feels like its coming out of nowhere (although, it is pretty cool if taken in the isolation of this issue). Phillip Tan’s art frustratingly verges between pretty awesome (his Ghost Rider, martial arts sequences) and kinda shoddy (Matt in a suit, the Kingpin talking to the Hand).

Daredevil 512 is the epilogue to the series, so it’s worth discussing. The issue largely deals with the crossover’s aftermath on Daredevil’s supporting cast. But what it does most effectively is make us all wish that Marco Checchetto had done the art on Shadowland. Moody and atmospheric, he’s the perfect artist for Daredevil and I hope to see more of his work in the future. The issue also reinforces the idea that it was his idea to kill Bullseye and sets up Daredevil’s status quo, which seems to be wandering as a drifter, alone through the Midwest.

Now here’s the problem with Shadowland – it’s a mess, but its brimming with potential. Matt Murdock losing it and going over the edge is a great idea, but somehow that got muddled in the transition from idea to story. I don’t know if that’s because it was a crossover or because Diggle was just trying to resolve the status quo that Brubaker left behind, but something didn’t click.

Now, we have another great story idea – Matt Murdock has finally hit bottom, I mean absolute rock bottom. His friends don’t trust him, he’s given up his life, and he has nowhere else to go. That is a Daredevil story I’d like to read and that makes total sense for the character. Daredevil has consistently been one of the best mainstream comics over the past ten years, which is what makes Shadowland so disappointing. Andy Diggle is a better writer than Shadowland would suggest and I hope that with Daredevil: Reborn, he can realize his potential on this character, because my patience with this book is wearing thin.
Posted by Greg at Thursday, December 02, 2010