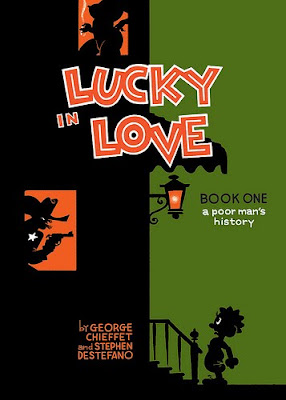 Since I live in France, I’ve been forced to mail order my comics. If you thought shipping was expensive in the States, you don’t even want to know what it costs to send books over the ocean. Even at media mail rates, it’s outrageously expensive.

Due to high costs, I’ve really tried to par down my list to only those books that I felt were obvious winners. Which is why I picked Lucky in Love: A Poor Man's History script by George Chieffet, plot and art by Stephen DeStefano, 120-page 6.5" x 8.5" hardcover published by Fantagraphics.

Lucky in Love is the story of Lucky Testatuda, an Italian American, growing up in New Jersey in the 1940’s. The story highlights three stages of Lucky’s life: his teenage years just before joining the military in the early 1940's, his time during the war, and after he is discharged and returns home. Lucky is a, to borrow Bob Fingerman's description, "not-outright-liar, but serial embellisher," and this leads to many a interesting comparion between what you see occurring on the page and the event as related by Lucky.

Let’s cut to the chase, Lucky in Love is a very good book with an outstanding story and stellar art. The story is incredibly well written and Lucky, as a person, practically leaps off the page at you. His characterization was spot on, and I recognized the personality in people I had known over the years. It’s hard to create a character that is so rich that anyone can relate to him, or her, but Chieffet and DeStefano have done it. At the same time, Chieffet and DeStefano place Lucky in situations that present him with opportunities to be a better person, or at least tell the truth. These instances really let you get to the heart of the character and understand him.

The same can be said of the art. Stephen DeStefano is the consummate professional who has been working in comics, and animation, for years. In the 1980’s, he created one of the best loved, sincere, and heart warming comics ever in “‘Mazing Man.” His style has changed significantly since then, but it remains a thing of beauty to look at. It reminds me of Tex Avery, Milt Gross, and even a smidge of George Carlson’s Jingle Jangle Tales. The influence of animation is evident and the images on the pages practically jump out at you. The book is predominantly 6 or 9 panel pages that are stuffed with detail. It's just fantastic.

But, as masterful as the book was, I’m not sure that I liked it. The problem is that I loathed the main character Lucky. There are several cringe worthy moments, perfectly in character, that make you despise him. After two or three of those, I was losing interest in reading about him. But, that is obviously the point of the story. Chieffet and DeStefano achieve the goal with far too much success and Lucky went from loveable scab to pure loser.

The other problem I had, similar to Charles Burns X’ed Out, is the fact that the concluding volume won’t be released until 2013. In the final pages of the book, just when it looked like Lucky might actually have a mature moment, the story ended. To Chieffet and DeStefano’s credit, it is a clean ending and the book stands on it’s own. But, I wanted more! There were enough hints and tips to show that Lucky might actually develop into a person that I could respect, if not like. But, those moments never came and now I am left waiting for a conclusion.

Overall, this book has great art, a great story, but I can't help but feel that the authors might have done their job just a little bit too well.
FYI, there is an 8 page preview here.
Posted by Lee at Thursday, December 02, 2010