Boundless Comics
Lady Death Origins Vol. 01 SC by (W) Brian Pulido (A) Ron Adrian, Richard Ortiz (C) Javier Barreno
For the first time ever, Lady Death's previous tales are being collected in this new series of graphic novels, Lady Death: Origins! With tons of breathtaking adventures that are, until now, out of print, the Lady Death: Origins series is a perfect way for fans to see what has come before the new Boundless monthly series! This first volume collects the epic five-issue Abandon All Hope series, which not only tells Lady Death's origin story, but introduces a whole cast of characters, with art from Ron Adrian. Also contained within is the two-issue Wicked series with art by Richard Ortiz. This volume is available in Paperback with a cover by Javier (Crossed) Barreno, a Hardcover by Juan Jose Ryp that is limited to 2,500 copies, and a special Signed Hardcover with a new cover from Richard Ortiz and featuring a signature plate from creator and writer Brian Pulido, which is limited to just 1,250 copies! $19.99
Lee: Not new, but still, a whole generation of young boys grew up with this material. I'm sure that Greg, and comic store buddy Shawn, will be eagerly anticipating this so they can relive their amazingly exciting high school years.
Gwen: Joy... naked covers. Was there any actual story to these or was it just purchased for the art?

Drawn & Quarterly
Mid-Life GN by (W/A) Joe Ollman
Mid-Life is the story of John, who at 40 becomes a father again with his much younger second wife, which results in a slow, painful attack by flowered baby bags and front-facing baby carriers on his former virility and self-identity. John always believed that age is a state of mind; however, his adult daughters, baby son, energetic wife, stressful job, house full of cats, and flabby body - complete with bloated stomach and sagging bosom - all lead John reluctantly to admit that he is having a mid-life crisis. The crisis drives John to yell at his wife, pick fights with his daughters, and miss deadlines at work that put his job on the line. He takes solace from the stress of everyday life with a seemingly harmless infatuation with the pretty children's performer, Sherry Smalls, who sings adoringly to him directly from his son's DVD. As their lives snowball, John's infatuation turns into obsession and a haphazard, fateful e-mail leads to a necessary reality check that neither John nor Sherry may have wanted, but that both will surprisingly welcome... $19.95 Visit Ollman and see a preview here.
Lee: Somehow, this sounds good but really creepy all at the same time. In summary, man has midlife crisis and devolves into a stalker. Somewhere along the way I missed the humor in the title. Not to mention, once you throw the stalker word out there, it's hard to see redemption, or even sympathy in such characters. The one saving grace is the preview. I was ready to completely dismiss this until that... which was really good. It showed some of the real painful moments of parenting in a very realistic way. For now, I'm undecided.
Gwen: I think I'm leading towards really creepy.

D. E./Dynamite Entertainment
Bullet to the Head SC by (W) Matz (A/C) Colin WilsonT
wo cops. Two killers. A political scandal. One beautiful corpse. And a city gripped with fear. Dynamite Entertainment proudly presents Bullet to the Head - a classic crime noir tale of violence and revenge from writer Matz (Killer) and artist Colin Wilson! $19.99
Lee: Matz is an outstanding writer and this series has gotten rave reviews. Well, maybe not rave but very good. The story is very complex with a ton of characters doing all sorts of bad things to one another. The knock is that it was almost too complex to follow as a monthly book. But that won't bother me because I'm going to read the trade.
Gwen: I love crime solving books. This sounds like it will be good and as Lee said it should be great in trade format.

Garth Ennis' Jennifer Blood #1 by (W) Garth Ennis (A) Adriano Batista
Jennifer Blood is a suburban wife and mom by day, and a ruthless vigilante by night! Every day she makes breakfast, takes the kids to school, cleans the house, naps for an hour or two, makes dinner, puts the kids to bed, and kisses her husband goodnight. This suburban punisher is ready to be unleashed in a story that can only be told by the legendary Garth Ennis! $3.99
Lee: I love Ennis's concepts but I always worry about the level of violence that is going to come with it. Ennis's Crossed was over the top and not in a good way, but Ennis's Punisher was ok. If this is Punisher without the constraints of Marvel (if there were any) then it should be really good. If it's brutality for the sake of brutality then I'll pass.
Gwen: As Lee said, great concept but Garth Ennis can be hit or miss depending on whether or not he takes things from the good story edge to the mindless violence side of the fence. Still the concept looks entertaining enough to give it a shot.

Evil Twin Comics
Comic Book Comics #5 by (W) Fred Van Lente (A) Ryan Dunlavey
Get ready for non-stop action, action, action - legal action, that is! The incredible, insane true story of the American comic book industry continues with the All-Lawsuit Issue! DC vs. Fawcett! Disney vs. the Air Pirates! Jack Kirby vs. Marvel over his stolen artwork! Steve Gerber over Howard the Duck! Don DeCarlo over Josie and the Pussycats! And that pales next to the all-out war over the rights to Miracleman! Relist, Previous Orders are Canceled $3.95
Lee: This is sooooo ridiculously late it's sad. Granted, it's late because Van Lente has gone to bigger and better things, but I still miss this book. This is really the "History of Comics for Dummies" and it's awesome. The place to start if you've never studied the medium.
Gwen: I really like this work. Action Philosophers was also amazing. 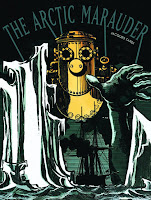 Fantagraphics Books
Arctic Marauder HC by (W/A) Jacques Tardi
In its ongoing quest to showcase the wide range of Jacques Tardi's bibliography, Fantagraphics reaches all the way back to one of his earliest, and most distinctive graphic novels: A satirical, Jules Vernes-esque retro-sci-fi yarn executed on scratchboard in a stunningly detailed faux-woodcut style perfectly chosen to render the Edwardian-era mechanical marvels on display. In 1899, LAnjou, a ship navigating the Arctic Ocean from Murmansk, Russia, to Le Havre, France comes across a stunning sight: A ghostly, abandoned vessel perched high atop an iceberg. But exploring this strange apparition is the last thing the sailors will ever do, as their own ship is soon dispatched to Davy Jones' locker via a mysterious explosion. Enter Jérôme Plumier, whose search for his missing uncle, the inventor Louis-Ferdinand Chapoutier, brings him into contact with the sinister, frigid forces behind this - and soon he too is headed towards the North Pole, where he will content with mad scientists, monsters of the deep, and futuristic submarines and flying machines. Told with brio in hilarious slabs of vintage purple prose, The Arctic Marauder works both as ripping good adventure story and parody of same, and, predating as it does the later and not dissimilar Adèle Blanc-Sec series, is a keystone in Tardi's oeuvre in his fantastical mode. $16.99
Lee: I loves me some Tradi!!!! Excellent art, excellent stories, this is a can't miss winner. The other books that Fantagraphics reprinted were outstanding and I expect no less from this. Well worth your time and investment.
Gwen: I'll take Lee's word on the art side but the stories look awesome. I love sea style adventure stories.

Dungeon Quest Vol. 01 GN by (W/A) Joe Daly
A SURREAL SUBURBAN ROLE PLAYING GAME YARN FROM THE CREATOR OF THE RED MONKEY DOUBLE HAPPINESS BOOK One day Millenium sic Boy decided to grab his hobo stick, his bandana, and his Swiss Army knife, bid his mom goodbye, and head off on a quest for adventure. Joined by his best friend Steve (weapon: baseball bat; clothing: wife beater, cargo pants and sandals), they soon find themselves in a violent altercation with two other adventure seekers. It ends badly for their antagonists (Whoa, check it out, dude! You actually knocked this dude's brain right out of his cranium!) and Millenium Boy and Steve become the proud owners of fancy weapons upgrades (a crowbar and a steel chain). So on they trek, and the next inductee to their group is the muscle-bound Lash Penis. And then things start getting weird! Readers of 2009's Red Monkey Double Happiness Book will recognize Joe Daly's delightfully unique stoner/philosopher dialogue and distinctive character designs, but the hilarious over-the-top Role Playing Game action (complete with periodic updates for each character's status in ten criteria, including dexterity, intelligence, and money) propel this new story into a heretofore unachieved action-comedy realm. By the end of this book (the first chapter of a projected four-part epic), the trio has been joined by Nerdgirl the Archer, Lash Penis has nearly had his arm cut off, they've acquired a whole new nifty bag of tricks, and the menaces have become increasingly surreal and lethal. Where will it end? Stay tuned for Dungeon Quest Book Two in six months! 136 pgs. $12.99 Go here, scroll to the bottom and see the 12 pg preview.
Lee: SO, what did I get from the preview? With a character named Lash Penis, it's easy to say this book is crude, vulgar, and it got more so as the pages went on.... and it was hilarous! I enjoyed the heck out of Daly's other book 'Red Monkey Double Happiness Book' so I'm sold on this. Please note, I picked Vol 01, not new, but Vol 2 WAS solicited this month so you can read the first half of the story in rapid succession.
Gwen: While I'm somewhat integrated in the gamer culture I have to say this is a little too far into the realm of creepy gamer boys to appeal to me.

Fiery Studios Inc
Little White Mouse Omnibus Edition by (W/A) Paul Sizer
In deep space, a young girl's survival will depend upon the strength of her heart. Loo, a 16-year-old girl stranded on an automated satellite in deep space, and her coming-of-age story in a harsh and unyielding environment became a fan-favorite book around the world. Now, the entire critically-acclaimed Little White Mouse series is collected into this 448 page Omnibus Edition, including a new 4-page framing story by series creator Paul Sizer. Available Again, Not a New Release $24.95 Visit Sizer here and see the webcomic here.
Lee: And my small press love of the month is Little Mouse. I think the Omnibus is a great format for this type of material because I can get a huge chunk of it all at once. Not to mention the story sounds interesting and the art looks good. This could be a winner.
Gwen: This is a little bit more up my alley. I'd actually be very interested in picking this book up.