Lee: May as well apologize up front and get it out of the way. Sorry to the fans because this month I picked a bunch of re-releases and re-solicits. I’m pretty sure I haven’t talked about most of it, but February is so slow that I can now talk about it. Also, big sorry to Gwen because it’s a boy heavy month. There wasn’t a lot of tender, touchy-feely stuff out there…. Unless you count the covers with huge tracks of land. Those were definitely touchable.
Gwen: Yeah because we know how, being a girl, I only like touchy-feely stuff. *rolls eyes*

Amaze Ink/Slave Labor Graphics
Replacement God SC by (W/A) Zander Cannon
This big trade paperback collects the eight Amaze Ink issues of The Replacement God. Series creator Zander Cannon garnered a Harvey Award nomination for his work on this series, and has since gone on to become an Eisner Award-winning artist on a variety of different titles. The Replacement God represents some of Zander's earliest, and perhaps most innovative, work! $19.95 Visit Cannon's website here.
Lee: The lead off book isn't new, but it's still interesting. Cannon has gone on to big things such as Top 10 with Alan Moore but this is where he started. I’ve heard a lot about this and it is supposed to be very highly regarded. It’s time for me to make the investment.
Gwen: I'm unfamiliar with this work so I'll wait on a review from Lee. 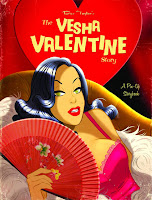 Vesha Valentine Story GN by (W/A) Des Taylor
Caberet or burlesque, movie or musical, Vesha Valentine came from the tough backstreets of Paris to become the world's greatest entertainer. Success for Vesha comes at a price though as she is caught up in the hype, temptation and glamour of 1950's Hollywood. Follow all the details of Vesha Valentine's career in a story book packed with amazing full-color art and imagery that mimics a bygone age of the silver screen. Vesha Valentine is a great gift for all fans of pin-up art, vintage musicals and buxom bombshells of classic cinema. $12.95 Visit Des Taylor here and his other creation, Katie Rogers, here for a idea of his art style.
Lee: Ok, I admit this looks bad but I don't think it is. I believe it is more SiTC than pin up stuff. Correction, Katie Rogers Taylor's other creation is SiTC. Anyway, he has a great, animation influenced style, and established an "appeals to all" character once before so I'm thinking this will be good. Unfortunately the cover panders to the lowest common denominator.
Gwen: In Lee's favor on this one it actually does look like an interesting read. And I'm definately not drawn in by the 'pin up' appeal.

Ape Entertainment
Black Dynamite: Slave Island GN by (W) Brian Ash (A) Jun Lofamia
Black Dynamite: Slave Island follows everyone's favorite blaxploitation sensation as he brings his bad-ass brand of kung-fu to the sequential page! Based on the eponymous film starring Michael Jai White, Black Dynamite uses his fists of fury to shut down a mysterious island of slavers! 48 pgs, FC, $5.95 See a preview here and see samples of LoFamia’s work here.
Lee: Last year I read Afrodisiac, another blaxploitation book, and loved it. Go figure but blaxploitation lends itself to the comic book medium. This sotry sounds like a hoot and Lofamia is a great artist so it’s worth taking a chance.
Gwen: This looks terrible. I mean... seriously.

Tales of a Hippy Kid: Road Trippin & Skinny Dippin GN by (W) Jon Kroll (A/C) Dave Bohn Tales of a Hippy Kid is a collection of funny, revealing and occasionally true stories of a bygone era. The weed was always pure, the tub was always hot, and lots of people walked around naked. This is the story of a bunch of those people. 108 pgs, FC, $14.95 See Bohn’s artwork, and some preview pages, here and visit the official site here.
Lee: These experiences seem closer to Jim’s life than mine so it might provide some insight into his warped thought process. Not to mention that it appears really funny.
Gwen: Um... since when was my Dad a hippie? I'm mean I'm sure the book is amusing but I have a hard time picturing my Jim as a hippie... 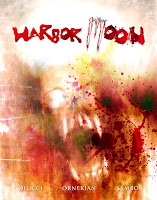 Arcana Studio
Harbor Moon GN by (W) Ryan Colucci, Dikran Ornekian (A) Pawel Sambor
When Timothy Vance receives a call from a man claiming to be his long-lost father, he takes a trip to out-of-the-way Harbor Moon, Maine. But the man is nowhere to be found and, unfortunately for Tim, the town doesn't take very kindly to strangers. As he struggles to stay alive and learn the truth about his father, Tim discovers that Harbor Moon is protecting an incredible secret and it turns out that Tim may have more in common with its residents than he could ever imagine! $19.95. Well, Sambor is Polish…. And here’s his website in Polish. I recommend just looking at the pictures…. and the official site is here complete with 23 pg preview.
Lee: And here we have the obligatory horror book of the month. The art in the previews look good and the story appears suitably creepy. What can I say, I'm always looking for a good horror story. My only complaint, I wish all the covers wouldn't look like Ben Templesmith imitations.
Gwen: Okay, this book looks intriguing. Of course it also looks like the opening to the new Tron movie but I have a feeling this one goes more of a vampire path if the cover is any indication.

Harry Walton, Henchman for Hire GN by (W) Zak Sherman Tom Martinek (A) Matt Webb
Harry Walton, a disenfranchised ex-super-hero sidekick, finds himself having to work with every B-List schmuck in town to work up the ranks of the Henchman's Union towards his ultimate goal: Super-Villain status. Smarter than most of the bosses he works for, Harry is stuck as a second banana once again. But when an opportunity to take revenge against his old Super-Hero partner arises, Henchman for Hire Harry Walton takes an initiative and launches a plan that catches the eyes of Super-Villains everywhere! 60 pgs, $9.95 See the art in process here.
Lee: And my other weakness, humor books. The previews aren't lettered so I can't comment on the dialogue but the visuals look good. Cartoony, in an appropriate way, for the subject matter.
Gwen: Maybe Lee is right - so far this is a mostly boy comic month. This type of genre doesn't really appeal to me.

Bloomsbury
Psychiatric Tales: 11 Stories of Mental Illness HC by (W/A) Darryl Cunningham
Psychiatric Tales draws on Darryl Cunningham's time working in a psychiatric ward to give a reasoned and sympathetic look into the world of mental illness. In each chapter, Cunningham explores a different mental health problem, using evocative imagery to describe the experience of mental illness, both from the point of view of those beset by illness and their friends and relatives. Concluding with a reflection on how mental illness has affected his own life, Darryl Cunningham's Psychiatric Tales is a moving, engaging examination of what is, at its root, the human condition. $15.00 Visit the blog here.
Lee: I recently read Seth's mini biographical tale in the back of Palookaville Vol 20 which was 10 pages of self loathing so intense, and so real, and so painful, that I could only read it in 5 page increments. I'm not comparing Cunningham to Seth but the topic is very real for a lot of people. At some point, I think everyone has known someone with some type of mental problem... heck I dated a couple of them, but I digress... I think this is a good chance to explore a topic that is far more present in society than we wish to admit. Art looks awesome too!
Gwen: Oh wow, now this looks fascinating. I love the idea of a book that tries to really get into the heads of people who think so differently. Mental illness isn't often examined from the perspective of the person afflicted by that illness.

Bluewater Productions
Judo Girl: So You Wanna Revolution? #1 by (W) Chad Rebman (A) Gregg Paulsen (C) Paulsen, Nex
Everyone's favorite groovy super heroine is back in all new four-issue mini-series! After being reawakened in our era, Judo Girl finds herself more isolated than ever. And after a tragic battle with a former nemesis, Judo Girl decides to hang up her go-go boots forever! Judo Girl reluctantly dons her super-hero guise, but as she works undercover with the Revolution, she discovers their anarchist beliefs jive with her 60s sensibilities. Now, Judo Girl must decide which side she's really on. #1 of 4, $3.99 You can see a preview here.
Lee: And my other weakness, princess Leia slave outfits. Not that this is Princess Leia, but she is wearing the bagels on the side of her head like Leia did. But she does look like Chun Li from Street Fighter.... WHAT? It's not impossible for me to know some random video game trivia. Anyway, it's a good girl comic with art that reminds me a whole lot of Ed McGuinness.
Gwen: I have no idea what to make of this. Go go boots, time travel and judo. Well it sounds humorous if nothing else.