Last Christmas I received The Ten-Cent Plague: The Great Comic-Book Scare and How it

Changed America, by David Hajdu as a present. 'Course, it took me almost a year to read it, even though it's only 334 pages, but at least it's now syncronicity for me to post a review of it the week of the following Christmas.

Let's be clear up front. This is a book about comics, not a comic book. Come to think of it, a great comic book could be adapted from it, though. It has drama, comedy, horror and more than a little pathos.

Hajdu does a very good job of laying out the history of comics through the HUAC-like hearings of the early to mid 1950s. He's particularly good at giving little insights into the early creators of comics, but also goes into a lot of the publishing 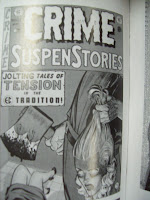 history, which was really the more important part for what happened to bring about the Comics Code. There were plenty of seedy characters in the industry, especially on the production side of things, where any new way to grab a buck was the order of the day. The writers and artists often had illusions of artistry about their work, though not all, but to the publishers they were just disposable items aimed at kids, mostly,with a tight profit margin.

When he gets to the congressional hearings, and how closely they aped the hearings on organized crime, it's both comic and dreadful. From our 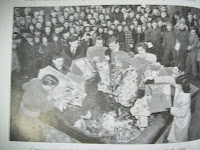 perspective in time, it's hard to believe anyone seriously believed that comic books were a threat to the mental health of kids. Harder still to believe that the persecutors of the comics didn't appreciate the nature of their crusade and its similarities to Fascism. They often engaged in comic book burning events, so it wasn't like it should have been that hard to connect the dots. Demagoguery at its finest.

Hajdu spends a good bit of time talking about how the adults of the era just didn't understand the appeal of comics, nor did they understand the rebellion they were seeing in their kids. Comics not having existed when they were kids, they attributed the rebellion to this unfamiliar medium, which coincidentally had a burst of horror titles become popular around that time. With all the other parade of fears, be they communist infiltration or mafia corruption, it's no wonder that the adults of the day had trouble seeing clearly. They had just beaten a major world threat and were hyper-vigilant for another.

My only complaint is the inaccuracy of the subtitle to the book. The second part, "How It 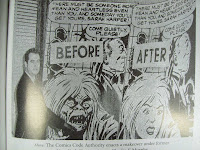 Changed America", is not presented. In fact, it was the comic book industry that was changed by this persecution, not so much America. Comics were turned from a vibrant, diverse industry willling to address whatever topic in whatever manner to a medium only allowed to present the most mundane and inoffensive stories, subject to its own censorship board. It would be 20 years before comics escaped, in fits and starts, from these strictures. A comix underground came about as a bootleg way of avoiding the Comics Code. Mad Magazine was born out of its original comic book form and became very popular in its seditious sort of way. But in no way would I say that comix or Mad changed America. 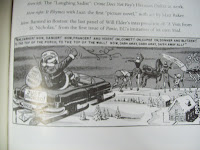