Lee: I’ve been doing this long enough to recognize a slow February when I see it. Luckily it doesn’t appear to be one for IDW.
Thomm: February’s only the best month of the year. Best chance of snow in Maryland. President’s Day. Groundhog Day. My birthday, too.

Art of George Perez HC
Desperado and IDW are proud to present a retrospective volume devoted to the entire career of one of today's most popular artists, George Perez. This book offers readers and fans a chance to witness his immense and sensational career from his early days at Marvel to his glory days at DC where he co-created the New Teen Titans, which rivaled the X-Men in popularity at the time, and revitalized Wonder Woman as both writer and artist. This volume covers his return to the Avengers, as well as his resurgence at CrossGen and his own independent projects. This tome also offers glimpses of previously never-before-seen material from his files and sketchbooks, private commissioned work, as well as beautifully reproduced images of his personal favorites with insights into his life and creative process. This book is a necessity for any George Perez fan, as well as for anyone who truly appreciates comic books in general. $49.99
Lee: All I can figure is there are some crazy GP fans out there because this is the third or fourth art book that has been done for him. The price is steep but if you love Perez then it’s likely a must have.
Thomm: Perez is one of the few artists that I can almost instantly recognize but, really, I’d rather have a collection of his run on Wonder Woman or Teen Titans than an art book.

Dungeons & Dragons: Forgotten Realms Vol. 01 SC by Jeff Grubb (w) Rags Morales (a & c)
The classic DC Comics Forgotten Realms series is collected in trade paperback form for the first time! This action-packed volume collects the first eight issues of the fan-favorite by writer Jeff Grubb and artist Rags Morales (Identity Crisis). TPB Full Color. 204 Pages $19.99
Lee: If memory serves, this was an ordinary sword and sorcery team book. It only lasted 25 issues and the only truly interesting thing about it is the early Rags Morales art. I’m sure someone has fond memories of this series, it just isn’t me.
Thomm: I have no memories at all of the series, so it’s definitely not for me. Is IDW a farm team for Marvel and DC? Our first two picks here are of properties owned by the Big Two.

Fish Police Vol. 01 SC by Steve Moncuse (w & a & c)
Steve Moncuse's fondly remembered classic from the black and white explosion is collected here for the first time in more than 20 years. Hugely successful, and even becoming a Saturday morning cartoon, Moncuse's opus features a wide array of memorable characters alongside intricate and intriguing storylines! Meet Joe Gill, a Fish Police officer, the beautiful (but deadly!) Angelfish, Dr. Calamari, and the evil organization know only as S.Q.U.I.D! TPB B&W 112 Pages $14.99
Lee: While I’m not overly intrigued by Forgotten Realms, I am on the other hand, very interested in Fish Police. One of the few well loved series to come from, and semi-survive the B&W boom of the 80’s, Fish Police has always interested me. I’ve never actually read any of the stories but the fanbase is so passionate that it makes me want to check it out. In an interesting aside, Fish Police was actually developed into a cartoon in the 90s with John Ritter as the lead voice!
Thomm: Which only makes me think of Spongebob Squarepants. I remember this series being a big deal in the ‘80s, but like Lee, I never read any of it. A passionate fan base isn’t recommendation enough for me. I think Tarot has a passionate fan base, after all.

Phoenix Without Ashes HC by Harlan Ellison (w) Alan Robinson (a)
Harlan Ellison, one of the Grand Masters of science fiction and a multiple Hugo-, Nebula-, and Edgar Award-winner, returns to his roots with the graphic novel, Phoenix Without Ashes. The year is 2785, and Devon, a farmer banished for challenging his community's Elders, discovers a secret that changes everything he knew about the world, leading him on an adventure beyond his understanding and on a quest to solve a mystery beyond his comprehension before his entire world is destroyed in cataclysm. $21.99
Lee: Phoenix Without Ashes is the novelization of Harlan Ellison's ill fated TV venture from the early 1970's.
Thomm: So none of this is new? Um, when did writers become chess players? There’s no actual writers organization awarding the title of Grand Master, is there? 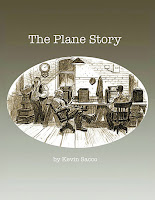 Plane Story SC by Kevin Sacco (w & a & c)
A modern-day Bildungsroman, The Plane Story follows young artist Kevin Sacco as he inches his way into the New York commercial art scene of the 1970s. Along the way, we are introduced to his Communist-turned-ad exec father, a mother he never knew he had, a cigarette smoking guardian angel, and a bevy of characters that all influence his fate. The Plane Story tells the universal story of a young man with a dream as he encounters the world's complicated realities. Think Mad Men meets A Contract With God in this wacky memoir in which the narrator/hero finds his greatest inspiration from New York's Everyman. $19.99An preview of Sacco’s story telling abilities can be found here. It isn’t this book but it will give you an idea of his ability.
Lee: IDW seems to be spilling over into Fantagraphics land with the ’real life’ story. It certainly sounds interesting, and if the preview is any indication, Sacco can certainly draw pretty pictures and tell a tale. It is certainly worth investigating.
Thomm: Doesn’t sound all that interesting to me. Everyman’s dream kinda means, well, it’s every man’s dream, which isn’t something I haven’t seen previously. Now, I did have to look up Bildungsroman, so I’ll give them credit for at least providing a learning moment for me.

Starstruck deluxe ed. HC by Elaine Lee (w) Michael Kaluta (a & c)
The classic, galactic-spanning saga of Starstruck, the renowned stage play/radio drama/heady science fiction classic, continues! Collecting all 13 issues of the completely remastered Starstruck series by Elaine Lee and Michael Wm. Kaluta. 280 pages of Starstruck and Galactic Girl Guides adventures, covers, pin-ups, glossary, postcards, and so much more! The first truly comprehensive collection of this material in a grand, over-sized hardcover edition. This beautiful book features some of the finest art ever put to paper by Kaluta, including many pages that were never printed in the original run. Additionally, Kaluta painstakingly added approximately 20 of art to NEARLY EVERY PAGE to ensure the aspect ratio of the comic would be consistent and correct. The end result is unlike anything you've ever experienced, a head-spinning, synapse-snapping, soul-searing ride to a world like no other the world of Starstruck. Hardcover. Full Color. 360 Pages 8 x 12 $49.99
Lee: From my understanding of Starstruck, it is equal parts messy, convoluted story, and beautiful pictures. Maybe the story isn’t as bad as I’ve heard because this is the 3rd or 4th time that the series has been reprinted. I do know that it’s a labor of love for Kaluta and it shows in his art. That alone makes it worth the money.
Thomm: Unless you’re a story guy like me. The art can be Michelangelo but if there’s no coherent story to support it, it’s sure not worth $50 to me. If I just want pretty pictures, I’ll buy those on their own.

Lee: Even though I managed to cut out the big expensive hc’s last month, it looks like I will be getting another one this month. Seeing Kaluta’s art oversized might just be too much for me to resist.
Thomm: Nothing really jumped out at me here. I’d say the Perez book and the Fish Police would be my two most likely purchases.