Well, the dreaded deadline doom is upon me -- what with multiple musical performances to attend, Physical Therapy, visiting relatives, and a planned trip out-of-town for my mother’s retirement celebration on Friday (yesterday for you) [UPDATE -- trip canceled due to snow in Richmond -- RATS!]. So, I’m going to try to keep it brief today (Seriously, I AM going to try…no promises though). Due to time constraints, I was afraid I’d have nothing much to talk about and was beginning to lament my decision to foolishly use my security blanket Ziggy buffer post a few weeks back. Fortunately, I do have a nice little gem to highlight from The Nearly complete essential HEMBECK ARCHIVES OMNIBUS – the sequence where Cartoon Fred dies! 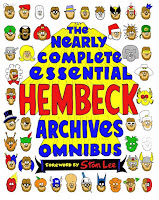 Strip#01: Cartoon Fred interviews the Joker about the anniversary, who claims that it wasn't him that killed Jason Todd, it was the readers. "...Though if I recall the ENORMOUS phone bill I got the month following the delinquent's demise, I must've had something to do with his forlorn fate?..." Fred's talking about what a cheap publicity stunt it was when the Joker's pocket phone rings (I don't know if they called them "cell" phones back then). It's for Fred -- it seems the editors at CBG want to have their own phone-in poll for HIM! He can even see the two phone numbers at the bottom of his strip. The Joker asks for a piece of paper to write the number down. "...? Don't you mean 'numbers'?", Fred nervously asks. "Nope.", grins the Joker. "...sigh...I always DID want to interview Casper..."

Strip#02: Cartoon Fred begins talking to Jimmy Olsen, when Darkseid arrives. He's there to gripe about everyone mispronoucing his name as Darkseed all the time. Plus, he has to endure the insults of his fellow evil-doers, who constantly mock him for first appearing in Jimmy's book. Sounds like a regular Dateline strip for the most part, but in panel 17 out of 25 in the middle of Darkseid's and Jimmy's exchange, Fred glances toward the reader with his hand fearfully on his beard and wonders how the voting is going.

Strip#03: Cartoon Fred is sitting in the dark just staring at the phone...waiting and waiting. It begins to ring and Fred crouches to the floor as the machine picks up the message. The results are IN and Fred's going to be snuffed OUT. The editors do say that they hired an expert to do the job. Fred has little time to wonder who it will be, when Jim Starlin arrives (wearing a paper bag mask like the old unknown comic from the Gong Show). "But-- But I thought we were friends?" "Hey, just who do you think made the FIRST call?" Fred is pumped five times with a rifle. As his bloody body drips on the floor, a ghostly Cartoon Fred sans feet arises from his cross-eyed (literally) lifeless husk. "I bet it's a sign! A sign that there was a higher purpose behind this grisly publicity stunt!!" Yep, the CBG editors are hoping he can get some exclusive interviews with dead comic characters now.

Strip#04: The now ghostly Cartoon Fred goes to the great beyond and first encounters all of the dead supporting characters from the Spider-man comics (Boy, there sure are a lot of them). The funny thing is that the actress who "allegedly" portrayed Aunt May in issue #400 of ASM (I say allegedly, because I like to think it was the real May who died then in the Spider-Girl universe) is still acting and Uncle Ben didn't even have a clue that she wasn't his beloved. Harry also learns why he can't seem to find his father anywhere. Incidentally, it turns out that the readers actually voted to keep Fred alive. Oops.

Strip#05: Ghostly Cartoon Fred runs into the pre-Geoff Johns era Barry Allen and Hal Jordan -- you know when heroes actually stayed dead. There's some nice commentary on the current state of the Wally West Flash and Kyle Rayner GL books (I know how fondly some of y'all remember those [Shawn and Gwen]) and a really funny gag with the Black Racer from the New Gods. I wonder why those two never talk about their days in Cloud City in the current books?

Strip#06: Ghostly Cartoon Fred now has feet! Why? Because, he's meeting Deadman, who always maintains his feet -- although not always his fine physique (Neal Adams/Jose Garcia-Lopez Deadman rules over Kelly Jones skeletal Deadman any day!). Fred also now has all of DMs body-entering abilities. You see there's this married couple and the wife is very insistent that her husband stay home for a little while longer (Forget "Parker" Jim -- this is a real and realistic male fantasy!). Fred is only too eager to "feel" alive again, but the husband doesn't stick around and has to rush off to a meeting. Deadman tells Fred that he has to use his powers to combat evil, not for his own selfish purposes. We find that Fred does just that when the couple later watch the evening news to hear that a former Marvel CEO has asked to be locked up for messing up the comic book industry. The wife is now ready to retire early...the husband eagerly follows and Fred hops into hubby. Deadman puts a stop to these shenanigans in a great off-panel gag. This is by far my favorite of the Dead Fred strips.

Strip#07: Ghostly Cartoon Fred meets Ghost from Dark Horse. You know the one with the supernatural endowments. Seems Fred can't keep his eyes on her eyes during the entire strip. However, he does manage to opine nicely on John Byrne reboots in the process.

Strip#08: Ghostly Cartoon Fred referees between the Spectre and some obscure rip-off called Nemesis. More to it than that, just want to move on to the other strips...

Strip#09: All the eerie creepy gang of crypt keepers and the like are assembled to watch an undead Fred claw his way out of the ground. Looks like they want him to join their group of horror comic narrators, but rotting flesh isn't his scene and switching back to his ghostly self goes to catch that interview with Casper.

Strip#10: It's catch-all time where ghostly Cartoon Fred meets up with a whole slew of deceased characters -- a different person or group for each panel:
1. Thomas and Martha Wayne
2. JSA Mr. Terrific (original)
3. Sgt. Rock and Easy Company
4. Captain Mar-vell
5. Alex Dewitt, fridge mate of Kyle Rainer
6. Bucky (Although, not possible these days . Perhaps it's just comic-book limbo, rather than an after-life.)
7. Jonah Hex
8. Guardians of the Universe
9. Baron Zemo
10. Aquaman's son, Arthur Jr. (still sucking his thumb)
11. Betty Ross Banner and Jarella
12. The Ancient One
13. Jason Todd (Man, they don't let anybody stay dead these days)
14. Battling Jack Murdock
15. Jor-EL
The jokes in each one are great.

Strip#11: Ghostly Cartoon Fred encounters Neil Gaiman's Death (which is a lot better than Neil Gaiman's One Life let me tell you -- YUCK!) One could be some fanboy's wetdream, the other deals entirely too much about what boys do while they're NOT dreaming -- It was the zero issue of Elric: Stormbringer and was NOT something I was expecting! She helps him get back his life and his legs, if not his own Vertigo series.

Strip#12: Cartoon Fred LIVES, arriving home to kiss his loved ones -- his comic book spinner rack (I wonder if real Fred really has one -- I do). Oh, he's happy to see his wife and daughter too of course. Part of this strip is a bit of a commercial for his mail order comics (30% discount -- and I thought 15% was good). His wife says that if he'd socked away his savings his little girl might have gone to an Ivy League University. "Daddy, will I get to go to college?" "Well, Sweetheart, probably not if DC raises the prices on their archival editions again. Sorry."

It all just puts a smile on your face...at least did for me!

You still might have time to order an Omnibus from Fred himself before Christmas and he's available for more cover redos! He just finished my third one!!!
Posted by Matthew at Saturday, December 18, 2010