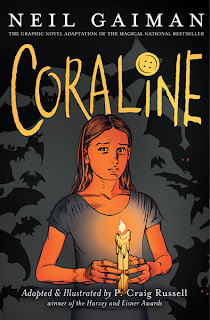 Based on the novel by Neil Gaiman


WOW, what a great book!!! The funny thing is that I don't think I would've ever gotten it last week (or any other) if it hadn't been for my store's subscriber empty box bonus coupon, which allowed me any one item at 40% off. I had no idea what I was going to try to get, so I was just perusing the shelves looking for something "good and cheap". Other than trying to save a few bucks on a possible Christmas present (for one of my children, NOT myself), which would probably be collecting dust in a few weeks, this seemed like the most reasonable choice. A quick consult with our very own Greg (nice to see you by the way -- sharp threads!) and my mind was made up (and if I had remembered Jim and Lee's recommendation from two and a half years ago that would've helped too [The blog's search engine really works well folks!]). For an impulse buy, having it be only six dollars was a huge bonus too!!!

Based on the creators involved, I was anticipating this to be a good read. I've enjoyed P. Craig Russell's art for quite a while since his work on the first Elric series by Pacific Comics (I still need the Stormbringer one though, which was published by Topps and Dark Horse -- [update: just purchased it off ebay]). Michael Moorcock was one of my favorite authors growing up, although he also wrote one of two books that I actually destroyed after reading it, "Behold the Man". The other one that I threw away, instead of donating it to a thrift store, was William Peter Blatty's "The Exorcist". Don't think of it as censorship -- they were my books and I had the right to do with them what I wanted and I'm not going to ask for them to be banned, but I wouldn't recommend them to anyone and two less copies in the world wouldn't hurt. I probably shouldn't even bring them up, since now you'll probably just go out and read them...(sigh). Anyway, I've never to my memory read many Neil Gaiman comics (I know I'm probably the only one who hasn't), but I did see the Stardust and Mirrormask movies and liked them well enough.

Most of y'all are probably already familiar with the basic story -- maybe you saw the recent film version (see some film comments below). However, in case you're not, here's the gist: Coraline (age around 8 to 10 I suppose) has just moved into an apartment (flat) in an old house with her two parents. There are two other groups living in the house, a pair of aging spinsters that were former actresses and an old man who claims to be training some mice for a circus. There is one area of the house that is locked up and vacant . In fact, there is a door from Coraline's drawing room to the vacant area, but when the door is opened you see that the connection has been entirely bricked up.

Both Coraline's parents seem to barely tolerate her existence (at least that's how she perceives them). Maybe they're just weary of her constant proclamations of boredom (Boy is that familiar). When it's nice outside Coraline likes to explore the grounds where she encounters a black cat. She also interacts with the other tenants, which strike her as a bit odd. They also never get her name right, pronouncing it Caroline instead. Things start to get a little (Rosemary's Baby-ish) creepy [a film I will NEVER see again], when they indicate that she's in danger.

Well, one day Coraline unlocks the door to the brick wall only to discover that there is now a dark passage way behind it. After walking through it she meets her "other" mother and "other" father, who seem much more loving and attentive than her real parents offering her whatever she wants, but their black button eyes are very unsettling. They want her to stay for ever and always -- the only catch is she's got to let them sew some black buttons over her eyes. Coraline declines and goes back home.

Soon after she realizes that her parents have been stolen so she has to return to the other world. She's armed with a few protective devices: a stone with a hole in it (given by the spinsters), some food (to counter act the "other" food), and the black cat (who can speak on the other side). The "other" mother is more agitated this time around and more predatory -- she also enlists some rats to obtain the key to the door to keep Coraline locked on this side. She punishes Coraline by placing her inside a mirror where she meets three spirits of deceased children (well, one of them is a fairy of some sort).

Apparently, the "other" mother is some sort of spidery creature called a Beldam, who will eventually suck the life out of Coraline. They warn her to get away while she can. However, Coraline is determined to save her parents and vows to save the souls of the spirits as well. When she is released from the mirror prison, she challenges the Beldam (who we never see it its real guise) to give her a chance to find the souls and her folks in exchange for her freedom. If she loses, then it's black button eyes time.

Despite the Beldam's trickery, Coraline is successful is winning the challenge, but she barely manages to escape. Things seem to be better now, but the Beldam's right hand also followed her and is trying to retrieve the key to the passageway. Coraline ingeniously dispatches the hand and finally all is right in the world and even the neighbors are now more normal.

Okay, obviously that recap doesn't scratch the surface of all the wonderful nuances this story contains. I'm curious if there are any recurring themes in Gaiman's other children stories. It's a fairly intense story for kids and I wanted to make sure I read it first before releasing it to my literate offspring. I didn't really get the chance though, because I was immediately urged to read it to my eight-year old daughter, Evy, who absolutely was enthralled with the book. We read the whole thing in two sittings.

The narration is fairly concise and Russell's page layouts mesh perfectly to keep the flow and the interest, capturing all the subtle and unsubtle sinister aspects. The coloring is brilliant as well, but I'd really like to comment on the exceptional lettering job. There's a lot of inventive approaches in placement that just enhance the whole experience. My favorite page is when the Beldam's hand comes to the tea party and meets its demise. The view point is awesome and so is Coraline's fractured counting. I'm interested in reading the original text, but I can't imagine it would be as good as this version. After all, it's not like a script where it's going to tell the reader that you have to look down upon the scene in a certain way. Russell has already covered those bases for you and while the source material could be very suspenseful and engrossing in it's own way -- I don't have the imagination to keep the appearances of the people and the furniture, etc. in my mind while I read.

I know I'm preaching to the choir here, but I couldn't help but praise this unexpected joy of a graphic novel. My 10-year old, Helen, has nearly finished it herself and I suspect the whole family will read it in turn. Not bad for six dollars. The experience of reading it with Evy, well to quote MasterCard -- "priceless".

Last Sunday night, we all (except the two youngest ones) sat down to watch Coraline as a family (2D version). It was made by the same guy who directed The Nightmare before Christmas, which isn't my favorite movie by far. I liked the stop-motion animation, but I really don't understand why they changed certain parts of the story, including my favorite tea party scene near the end. The stylistic animation made everything (both the real world and other world) too surreal. Russell's adaptation is firmly grounded in the "normal" world and deals with the supernatural sparingly -- only when he needs to, which makes the story more terrifying in places (I think). Even though the Beldam undergoes somewhat of a transformation in the comic, the movie leaves nothing to the imagination and shows it/her fully as the spidery thing. Coraline isn't some blue-haired girl, she looks just like one of my daughters. She's also much more capable and brave in the comic -- she needs a little help, but she certainly doesn't need a neighbor boy to finish off the Beldam. Really, changing that scene totally took her ingenuity right out of the story. To sum it up, if you've seen the movie then you haven't experienced the wonder of Coraline.
Posted by Matthew at Saturday, December 11, 2010

Email ThisBlogThis!Share to TwitterShare to FacebookShare to Pinterest
Labels: Back Issues, Reviews