Jim: Wow, we are already into 2010, is this our last year according to the Mayan Calendar? No it’s 2012 and did the Mayan have swimsuit calendars? Ad odd tangent I know, but onto the picks.
Lee: Ummm, yeah. A very odd tangent. But, maybe that new movie with John Cusak will answer the question. Apparently it has to do with Maya calendars. 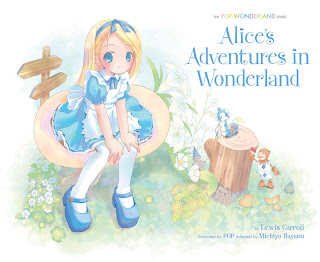 ALICE’S ADVENTURES IN WONDERLAND: THE POP WONDERLAND SERIES
Michiyo Hayano (W) and POP (A)On sale Mar 24 FC, 40 pages $16.99HC, 10 1/8" x 8 1/4"
Lewis Carroll’s universally known story of a little girl who falls down a rabbit hole into a magical wonderland is given a new spin in this lushly illustrated version of the classic tale.
Alice was sitting in a field reading when a white rabbit scampered by. She didn’t know what was odder: that the rabbit was running on its hind legs, wearing a jacket, and carrying a pocket watch, or that it was talking, shouting, "I’m late! I’m late!" From the moment she decided to follow the rabbit into his rabbit hole, Alice was transported to a fantastical place called Wonderland, where anything was possible. All of the familiar characters are here: the Hatter, the March Hare, the Cheshire Cat, the Caterpillar, and the wicked Queen of Hearts.
• A new line of children’s storybooks, the POP Wonderland series is rendered in a friendly pastel palette, with engaging art that brings familiar fairy tales to life in a brand-new way.
• Parents know their children love anime and manga, and the art style in these books will connect with moms and dads looking to get their child a book drawn in a modern style, yet telling a story they can identify with from their own childhoods.

Jim: So everyone is jumping into the children’s book business. My kids are grown so it looks like Lee can be getting Dark Horse children’s books for his kids to go with the Image books.
Lee: I’ve never been a pop up book person. The kids destroy them waaaayyyy to easily. That said, it’s an interesting move by DH to get into this market. Personally, the last thing we need is another kiddie book publisher but I’m intrigued to see what DH comes up with. 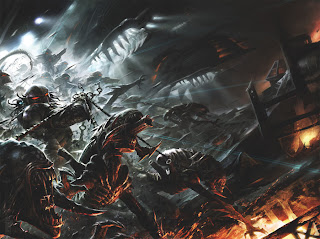 ALIENS VS. PREDATOR: THREE WORLD WAR #1 (of 6)
Randy Stradley (W), Rick Leonardi (P), Wes Dzioba (C), and Raymond Swanland (Cover)On sale Jan 13 FC, 40 pages$3.50Miniseries
A centuries-old interstellar conflict threatens humanity’s very existence as a long-lost Predator clan stakes its claim for galactic dominance, intent on exterminating its rival clan, the selfsame trophy hunters who have plagued Earth’s history and every world they have touched. And if the advanced technology and military precision of this new threat weren’t enough, they have an even more terrifying weapon at their disposal—Aliens, weaponized and under their malefic control. This puts earthmen in the dangerous position of parlaying with the same alien warriors who have relentlessly hunted them, and who better to carry out the negotiations than Machiko Naguchi, the only human known to have spent time alongside the Hunters.
• Features the creative team of original AvP writer Randy Stradley and penciller Rick Leonardi (Cloak and Dagger, Uncanny X-Men, Vigilante), and stunning cover art by Raymond Swanland (Aliens, Predator).
• Ties together story threads introduced in the original AvP series and new Aliens and Predator storylines, setting the stage for the most epic AvP brawl ever imagined!
Celebrating twenty years of terror and excitement!

Jim: I never got into the whole AVP thing. I find it amusing as neither franchise seemed to have anything to do with one another, but now it seems to have worked.
Lee: It was never my cup of tea either. But, it does seem to work and people like it. Maybe it’s the chance for over the top, violence and action that draws people in. And, there’s certainly nothing wrong with that.
Jim: Just noticed we went from a nice kid friendly version of Alice in Wonderland to AVP, quite the change. 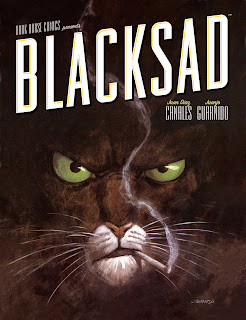 BLACKSAD
Juan Díaz Canales (W) and Juanjo Guarnido (A)On sale Mar 24 FC, 184 pages $29.99 HC, 8 3/8" x 10 7/8"
Private investigator John Blacksad is up to his feline ears in mystery, digging into the backstories behind murders, child abductions, and nuclear secrets. Guarnido’s sumptuously painted pages and rich cinematic style bring the world of 1950s America to vibrant life, with Canales weaving in fascinating tales of conspiracy, racial tension, and the "red scare" Communist witch hunts of the time. Guarnido reinvents anthropomorphism in these pages, and industry colleagues no less than Will Eisner, Jim Steranko, and Tim Sale are fans!
Whether John Blacksad is falling for dangerous women or getting beaten to within an inch of his life, his stories are, simply put, unforgettable.
• Dark Horse is very proud to present the first three Blacksad stories in a beautiful hardcover collection, completely relettered to the artist’s specifications and with the latest album, Red Soul, in English for the very first time.
• This internationally acclaimed series has won nearly a dozen prestigious awards—including the Angoulême Comics Festival prizes for Best Series and Best Artwork—and is a three-time Eisner Award nominee.
• Blacksad took Europe by storm in 2000 and sold over 200,000 copies in France alone.

Jim: This looked too good to pass up. A great example of the hype drawing me in, but I trust Dark Horse more then many publishers.
Lee: You will be very happy with Blacksad. It’s an excellent, excellent series. I have some of the old, crappy paper back trades that I’m more than will to get rid of. I’m really excited about this. 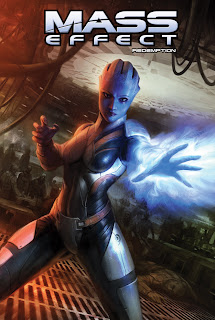 MASS EFFECT: REDEMPTION #1 (of 4)
Mac Walters (W), John Jackson Miller (W), Omar Francia (A), Michael Atiyeh (C), and Daryl Mandryk (Cover)On sale Jan 6 FC, 32 pages $3.50 Miniseries
Mass Effect 2 lead writer Mac Walters reveals an essential moment in the life of Commander Shepard, the galaxy’s greatest hero, only in Mass Effect: Redemption!
The eagerly anticipated sequel to the blockbuster science-fiction epic that IGN.com named the #1 Xbox 360 game of all time, Mass Effect 2 begins with the disappearance of Commander Shepard. The story of what happens next—exclusive to these comics—will have the commander’s companion Dr. Liara T’Soni undertake a deadly mission of extraordinary importance in the Milky Way’s lawless Terminus Systems.
Scripted by John Jackson Miller (Star Wars: Knights of the Old Republic) and drawn by Omar Francia (Star Wars: Legacy), this series is not only an integral part of the Mass Effect universe, it is the must-read comic that every fan of space adventure has been waiting for!
Look for a five-page preview of Mass Effect #1 in Buffy the Vampire Slayer #30 and Star War: Knights of the Old Republic #48!
From the lead writer of the popular video game—Mass Effect 2!

Jim: Now this is a pass. I have not read very many comics (if any) that really worked coming from a video game.
Lee: I really thought you were going to pick this because of the cover not because it was a video game. We need to make a rule like “no picking game tie in books” because you’re right, we haven’t never liked any so far. 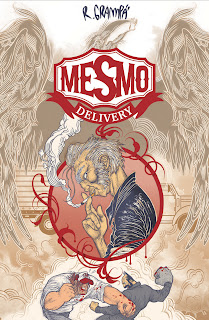 Jim: Lee loves Grampa. Lee probably loves Grandma too, but that’s not what I’m talking about. There has been a high buzz factor to his work.
Lee: I do love this! And I think I reviewed it too. I believe this is a reprint of the original book that came out last year or the year before. It’s an outstanding book with excellent visuals and a thread bare storyline. A good analogy would be Shaolin Cowboy. Some thing, great visuals, thread bare plot.

Jim: Still hard to believe we are talking about January already, but 2010 promises to be an interesting year for tons of reasons, and the comics should be interesting too.
Lee: I hope it’s a good year. We always need good books to look forward too. Then again, crappy books give us more blog fodder!
Posted by Jim at Friday, November 06, 2009