What I’m Getting Wednesday November 25

The end of the month is always a crusher. I guess the rush to publish is partially because all business look at monthly numbers and it is important to publish to count those books as sales. This week was big enough without Dark House moving up Chronicles of Kull TP Volume 1 and Chronicles of Solomon Kane TP Volume 1 as both were originally solicited for December. I know I will spend the same amount, but I hate having a huge bill coming due and then two extra trades hit also. Both of these books I picked up just to be able to re-read one day and then pass on. Some good material to be sure, but nothing that stands out as stuff I need to own forever.

The rest of the independent side of thing is light this week with only Chew #6, I Am Legion #6 (of 6), Creepy Comics #2 and Goon #33 being on my list. Of those four I confess that Chew #6 is the one I’m looking forward to the most. Tony Chu has fast become a favorite character of mine. After last issues big reveal that his ex-partner is trying to solve the mystery of what really killed everyone and that the whole Avian Flu thing could be a cover story, I can’t wait to read more. Tony will be getting a new partner and still has to track down his old partner; I have to see where we go next. This is a very entertaining book that mixes a great story and humor with some fun concepts and great art.

The big two are the incredibly huge two this week. Marvel has two expensive hard covers coming out this week with Marvel Masterworks Deathlok Volume 127 and Captain America Death of Omnibus. Marvel decided to cram a ton of Deathlok material to keep this a one and done Masterwork and I agree that it was the right idea. The second Omnibus for Brubaker’s Captain America series only goes to issue #42 as opposed to 25 issues like the last one, but I’m okay with that as my perfect size book is the slightly oversized volume with a year run in it. So 18 issues works for me and I believe the price was knocked back to $65 as opposed to the solicited $75.

A bittersweet book from Marvel is Thor Giant Size Finale. I hate to see J. Michael Stracynski leave this series, but at least he was given time to wrap up some of his story lines. I think JMS has years of Thor in him, but Marvel wanted Thor back into the MU and JMS did not want to be part of that type of tight continuity. I hope we get a nice one or two volume set collecting this run as JMS defined Thor for this generation and gave him a reboot that should last for decades. 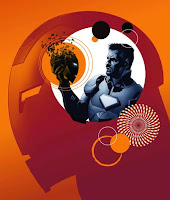 The whole Dark Reign thing has become boring for me and even I end up reading about it more then I want. This week we have Invincible Iron Man #20, New Avengers #59, and Secret Warriors #10 as all being books that are considered part of that landscape. Of these Iron Man has been drawn out, but well done and I’m curious to see how they rebuild Tony and what he has become and will become down the road. New Avengers has lost me and I barely remember from issue to issue what is happening. Secret Warriors I enjoy as I get my Nick Fury fix with this book. I’m looking forward to seeing Nick back in charge of a new Shield down the road.

Marvel also has Criminal Sinners #2 continuing Brubaker and Phillips great noir book. Next up is Fantastic Four #573 which is the second arc for writer Jonathan Hickman and Dale Eaglesham. I love how this book has gotten back to its roots and it has made me want to go and finally crack open the collected editions I have of Mark Waid’s run on the book. Also we have Guardians of the Galaxy #20 which is part of the Realm of Kings story line that has started out very well. To round out Marvel’s books I’m getting this week we have Immortal Weapons #5 (of 5), Incredible Hercules #138 and Ultimate Comics Avengers #4. Whew, that is a bunch and DC is even bigger.

Blackest Night #5 (of 8) is of course THE book of the week. I have been enjoying this series a lot and even the cross-over books have been working for the most part. Although Adventure Comics #4 and the Superman / Batman blackest night books last week were either bad or just blah. This week we get what I consider to be a core book with Green Lantern #48 and the ancillary cross-over books of Justice League of America #39 and Teen Titans #77. The BN material has been so strong I held off dropping Teen Titans because it crossed over. What has intrigued me the most is how this will all play out. The death of so many characters is an issue and I hope Geoff Johns does help to define death in the DCU. To me the best idea would be to leave a lot of these characters dead and redefine dead as dead again. It would make the DCU a place where repercussions actually exist. Although in talking of death I do not think Kyle’s story is done and if anything I see him playing a major role as some sort of white lantern or something.

Of course no DC week is complete with out books out of the bat family. This week we have Arkham Reborn #2 (of 3), Gotham City Sirens #6 and Detective Comics #859. Detective Comics is currently exploring the secret origin of Batwoman. Rucka has been doing such a great job with Kathy Kane and I was excited to see them get down to an origin of her character finally. To have it all be brought to life by JH Williams III is just a further bonus. His work has always been great but he has hit a different level on this book.

Rounding out the super hero side of the DCU we have Justice League Cry for Justice #5 (of 7), which enjoys great artwork, Justice Society of

America #33 which is leading up to the team splitting up (and getting two books), Superman #694 which now features Mon-el, The Web #3 which really missed last issue, Wonder Woman #38, World’s Finest #2 (of 4) and Superman Secret Origin #3 (of 6). For some reason I’m not hearing a lot buzz on Superman Secret Origin, but I think everyone feels it is a rehash of what they already know. Too many people have forgotten that since Byrne did the reset on Superman his continuity changed and this is giving us the new status quo. Not only is it doing that but Johns is giving us a great character study and Gary Franks is giving us some great art. In my book this is another big title from DC.

Vertigo and Wildstorm and one inexpensive hard cover are the last books from DC. The Saga of the Swamp Thing Vol 2 is a $25 hard cover collecting more of Alan Moore’s Swamp Thing run with issues #24-32. I assume that this is a good break point and with so few issues that a lower price point was decided on. We also get Northlanders #22, which contains Part 2 of the Plague Widow story. Last and not least from Vertigo is Madame Xanadu #17. With Matt Wagner and Amy Reeder Hadley on this book each issue is sheer magic. Finally the Wildstorm corner of the DCU gives me Wildcats #17, which is a book that I’m close to dropping.
That’s it for what I’m getting this Wednesday, come back next Monday we will do this again next week.
Posted by Jim at Monday, November 23, 2009