Lee: Another month, another big selection of indies. Lots of good stuff this month between the older, getting reprinted again material I missed the first time and new stuff. Not to mention, a fair amount of stupidity that's easy to ridicule. A glorious month indeed.
Jim: The indie material is always a little odd because the market does constantly push older books or will re-release older material. Also many of the publisher's websites make it difficult to even know what is coming out or when. 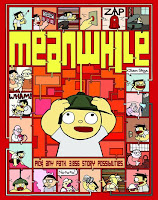 Abrams
Meanwhile: Pick Any Path 3856 Story Possibilities by (W/A) Jason Shiga
Follow the tabs to create your own story in this innovative interactive graphic novel! Chocolate or vanilla? This simple choice is all it takes to get started with Meanwhile, the wildly inventive creation of comics mastermind Jason Shiga. Jimmy, whose every move is under your control, finds himself in a mad scientist's lab, where he's given a choice between three amazing objects: a mind-reading device, a time-travel machine, or the Killitron 3000 (which is as ominous as it sounds) Down each of these paths there are puzzles, mysterious clues, and shocking revelations. It's up to the reader to lead Jimmy to success or disaster. Each read creates a new adventure! $15.95 You can visit Jason here and see lots of examples, even read entire books on his site.
Lee: This works for me on two levels. The first: I love create a path books. They were always fun… except for that one in fourth grade. No matter what I did I always ended up in the maze and could never get out. That book sucked. ANYWAY, how can this book not be fun with a Killitron 3000. After that, it works because I bet that Shiga has loaded this thing with adult humor. After reading a couple of books on his site, his is a very twisted sense of humor that matches Johnny Ryan’s worst excesses.
Jim: Yeah, if I was in fourth grade maybe this would sound like fun. No matter how twisted his humor this concept is not getting me to even consider a buy order.

Amaze Ink/Slave Labor Graphics
Widgey Q Butterfluff Vol. 01 GN by (W/A) Steph Cherrywell
Widgey Q. Butterfluff is the most sickeningly cute person in the Snugglepump Valley, a place that has been stuck on Saturday Morning for over 20 years. With little more than a sunny personality, the titular heroine takes on the full range of kiddy-cartoon villains, from teenaged ennui to armored skeletons to timeslot-appropriate drug metaphors. This original graphic novel introduces us to a cast of characters to appeal to the cartoon-junkie in all of us. $9.95 Previews here
Lee: And here we have another book that just appears to be for kids. The cover may look kiddie but the story is pure high school giggles. And I mean that in a positive way. The preview provides a great sense of what this is about.
Jim: Has all the earmarks of a great satire and is poking fun at some stuff which begs to be ridiculed.

Antarctic Press
President Evil: Yes We Cannibal #4 by (W/A) David Hutchison
Washington, D.C. is now completely overrun with the undead. While it's an option he never wanted to employ, Ba-rot has no choice but to wall up the zombie-infested city! The embattled President then makes his way to the nation's new capital in...Honolulu!? $3.99
Lee: This is just ridiculous. I’m not sure if I made fun of this before or not but everytime I think we’ve reached a new low… someone goes lower.
Jim: This is the dark side of reaching super popularity with a certain set of people. Of course that Spider-Man issue selling a million copies doomed poor Barack to being featured in a lot of comics he will never see or read.

Archaia Entertainment LLC
Tumor w/Dust Jacket HC by (W) Joshua Hale Fialkov (A) Noel Tuazon
Frank Armstrong has an inoperable brain tumor that's killing him. In his final days, with his body, senses, and mind failing him, he's going to do the one thing that he's never been able to do before - save the girl. After debuting on the Amazon Kindle and holding the #1 spot on the Kindle Graphic Novel Bestseller list for over two months, Archaia is pleased to bring this acclaimed graphic novel to print! $14.95 There's a preview of the first chapter here
Jim: Joshua Fialkov has done some good work with the couple stories of his I have read and this has a great premise. Since I don't have a Kindle I will happily settle for actual paper.
Lee: The book sounded interesting but the "biggest Kindle Seller" sounded forced and hokey so this was going to be a pass for me. Then I realized that Fialkov did 'Elk's Run' which I loved. (NOTE: Go find a copy Elk's Run... it's very good.) Then I found the previews, read the first chapter and now I'm sold. The arts a little coarser than my normal tastes but it works.

Avatar Press Inc
Absolution #1 (Big Apple edition)
The perfect place to jump aboard Absolution as Paul Duffield delivers this new cover that was previously only available at Big Apple Comic-con! This special edition first printing is limited to just 1500 copies and available for the original cover price! $3.99
Lee: And here I thought Marvel had cornered the market on gore. Avatar takes tasteless to a whole new level with a bloody upskirt shot. Yeah. This is great!
Jim: Avatar and bloody almost soft porn cover shot, sounds like Avatar of old. They have grown past this and doing even a special edition cover like this sets back their new reputation they had been building.

Bluewater Productions
Logan's Run #1 by (W) Paul Salamoff (A) Daniel Gete
Logan has been trained to kill; born and bred from conception to be the best of the best, but his time is short, he's nearing the end of his life. Age 21, when every citizen reports for Deep Sleep. But before his life ends he's got one final mission: Find and destroy Sanctuary, a fabled haven for those that chose to defy the system. William F. Nolan's masterpiece of dystopian future once again races into the 23rd Century with this all-new adaptation of Logan's Run. $3.99
Jim: I can't believe someone wants to try and trot this concept out again. It was a fun and different movie for its time, but that time has long since past. Plus all the people who said don't trust anyone over 30 are now in their fifties and sixties. Some concepts fit in a time and place, and Logan's Run is one of those.
Lee: I was wondering where you would go with this. I loved LR as a kid. To this day, I still force my wife to watch it every time it comes on. I think the concept is still very good, just not for us. Probably because we're both over 30. My only concern is can it live up to the old Marvel series. Which while possessing over writing typical of the 70's, the Marvel series had great art by Perez and Golden.

Boom! Studios
Donald Duck Classics Vol. 01: Quack Up HC by (W/A) Carl Barks
Whether it's finding gold, journeying in the Klondike, or fighting ghosts, Donald will always have help with Huey, Dewey, Louie, his much more prepared nephews, by his side! Carl Barks brought Donald to prominence, and it's only fair to start off the series with some of his most influential stories! $24.99
Lee: This is pure Duck loving excitement. I hope that Boom does more and more Duck hc’s so I can talk about them every month. If you (Jim) haven’t read them yet you should!
Jim: This is a shocker, Lee picking Duck books. Thankfully Boom picked up the rights to this material or Lee would have been duckless.

Dingo #2 by (W) Michael Alan Nelson (A) Francesco Biagini
Dingo thought all his problems were behind him. Sure, his brother asked an impossible favor. Yes, a gigantic, feral dog started following him. Of course, his angry ex-wife came (violently) back into his life. But that was all behind him, right? Nope. Dingo was wrong. And now he's on the run for his life. Throw in some dark magic and a family secret that refuses to stay buried, and you won't want to miss this issue! Covers by Biagini and Paul Hormon. $3.99
Lee: So, I picked this because a little voice told me too. Said little voice called out to me and said “HEY! Why didn’t you pick a Boom book? You got something against Boom books? You better pick a Boom book… dramatic pause… if you know what’s good for you.” That’s what the little voice said. So I’m picking this book. And, you know who you are little voice so leave me alone ya big nag!
Jim: Was the little voice coming from a far off land called California? Michael Alan Nelson has crafted a lot of great stories for Boom over the years that are across a lot of genres. No worries about a franchise character, just good stories and almost always worth the admission price.

Drawn & Quarterly
Hicksville GN (definitive ed.) by (W/A) Dylan Horrocks
One of the first acclaimed contemporary graphic novels is now back in print with a new cover and new 16-page drawn introduction by Dylan Horrocks. Considered to be a classic by many, Hicksville was named a Book of the Year by The Comics Journal and received nominations for two Ignatz Awards, a Harvey Award, and two AlphArt Awards. $19.95 Visit Dylan here
Lee: Slowly I’ve been working my way through all the great books of previous years. This is one that I’ve always heard about but never read. And, as everyone knows, I believe in the awards so I’m getting this.
Jim: I know Lee's thoughts on this, but the solicitation copy is horrible. It never gives us a clue as to what the book is about.
Lee: That's a really good point because the ad copy is terrible. If I hadn't heard buzz about the book before, then I would never have been interested.