You Have Killed Me – A Review 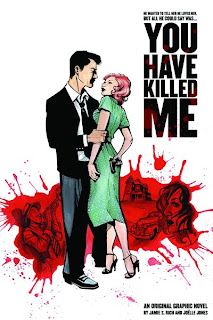 You Have Killed Me

Okay this book came out earlier this year and it was sitting on my bookshelf as is Cooke’s adaptation of Parker “The Hunter”. I pick up stuff when it comes out because on trades or original graphic novels I worry I will forget about it and never pick it up. Also my store (as many others) is not going to have copies of this type of book sitting on their shelves, which is a shame when you think about. The rack space it takes up is the same as a comic; plus the profit margin is higher. For the fan the actual bang for the buck is great as five $4 comics would only contain 110 pages of story and art. Also another thing this type of product delivers is a story with a beginning, middle and an end.

I have to say that this book was exactly what I expected and also much more then it should have been. This is like starting off your story with “It was a dark and stormy night”, it had tons of cliché ridden characters in it, but it worked and was a beautiful book. I felt like I was watching a great old movie when all of these clichés were being established.

The story is set in the late thirties. It is the best timeframe for this type of story as all the technology and gadgets that are available today take away the idea of using shoe leather and old fashioned interrogations to gather information. Plus you have the great old cars which breathe style as opposed to so many of today’s cars being almost indistinguishable from each other. Just having people smoking in the story gives it that certain vibe that you can’t get in a modern politically correct society.

Tony Mercer is our down on his luck PI. We have no idea of exactly why he is a private dick, but we know that he does it because it is what he knows to do. The femme fatale shows up and it is the sister of an ex-flame . Jennifer (the sister) tells him, has disappeared and she needs Mercer to find her. was due to marry and the family would be devastated if she does not show for the wedding.

Mercer follows a winding path through the home of the sisters, a jazz club, a dark alleyway or two, a horse track, and on and on. The trail leads to death, Mercer getting shot by a girl and back again. I won’t write a plot summary, because I hope you go and buy the book, but it is just the feel and flavor of this book that made me fall in love with it.

At the beginning they felt like cookie cutter characters straight out of central casting and then I realized that I loved a lot of old movies like that. There was a great old film from 1944 (yes even before I was born) called Laura that about a police detective investigating a high society girl’s death. He becomes obsessed with her even thought she is dead. There is a more modern version about the detective obsessed with a girl thought to be dead and called Sharkey’s Machine, perhaps the best movie with Burt Reynolds ever (not high praise, but it is a good movie). While this book thematically is not following that path it has the same feeling of the PI is chasing and looking for a girl that he loves. He is being played for a fool at times, but has the tough edge that will see him though to the end.

Joelle Jones art got better and better as the book went on also. At first I felt it was all a little too angular and her giving the PI a partial beard that disappeared here and there made me wonder about the time setting as that is to me a more modern affectation. As I continued to read and be pulled into the story I realized how strong her work is as many pages were wordless and she was carrying the story telling. The layouts and page design were great. Her women were sexy while still feeling real, yet at the same time they exuded a hint of danger or even madness depending on the character. Each character looked different and with a wide a cast as this story had it would have been easy to make some of them generic, but she never did. It is definitely more of what I call an indy style, which means it is not a super hero style or a pure noir style, but a realistic style that appears simplistic, but is amazing complex and sophisticated in her story telling abilities.

Overall Grade A – You Have Killed Me is a wonderful throwback to an era where the private eyes were dicks and the women were dames. A noir book at its heart, taking the familiar and making it new and fresh again.