When I was laid up for about a week and a half after my surgery last month I had lots of reading time. I also didn't feel like going all the way down to the basement where the comics cabinet is or going through its shelves, so I went with the easier to find stuff I have on a bookshelf in the living room. Now I have several things I read then to go over.
I'll start with DC Comics Two Thousand. Awhile ago I reviewed 1998's DC Comics 1,000,000 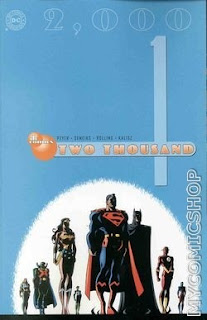 and didn't have much positive to say about it. Two Thousand, which came out in 2000, bore little resemblence to 1,000,000, other than the titling similarity. Where 1,000,000 was done in 4 issues over the course of November 1998 and had a myriad of single issue tie ins to other titles, Two Thousand is self contained in two issues published in the graphic novel format. Considering that fans, for reasons beyond my comprehension, actually liked 1,000,000, I don't know what possessed DC to opt for this eminently more readable and coherent format. I'm glad they did, though.
Two Thousand was written by Tom Peyer, pencilled by Val Semeiks, inked by Prentis Rollins and colored by John Kalisz. It tells a story of T.O. Morrow. I don't know that it has anything to do with current DCU history, but I don't really care, either. It's excellent story telling, consistent with the characters it uses, regardless of where or whether it fits into continuity. Truthfully, I'd be just as happy if DC opted to disregard the continuity battle altogether and just went with telling good stories in each of its titles. That's how I decide to buy titles anyway.
Where was I? Oh, yeah. The story. Thomas Oscar Morrow, born some time after the 1939 World's Fair, is obviously a precocious kid, as the main setting of this story is June and July 1941, and Morrow's already reading comic books. I know they were aimed at a younger audience then, but not that young. Morrow's parents actually named him so he would be Tomorrow on purpose, after having been impressed by the future posited at the World's Fair. Morrow's father has died in a jet pack accident and his mother is clearly more concerned about the fantastic future than the dismal present in which she and Morrow live. Morrow, of course, grows up to be a "mad scientist" obsessed with the future. When he travels to some distant future as an adult and finds himself little more than a zoo specimen, he escapes back to his present and proceeds to change that present, and the far future, by sending technology from 2000 back to 1941. He's smart enough to send not just weapons but technology that will have a broader appeal, such as a cell phone, a lap top and an artificial heart.
The real stars of the story are the 1941 JSA, a group that has only recently banded together and is not quite comfortable in its internal dynamics. The JLA is ostensibly the co-stars of the story, but their role really makes them support characters. The interesting interactions and character developments occur with the JSA because they're the new guys and they're trying to figure out what's going on with this technology from the future. The JLA have been working together a long time and know what the threat is, coming from the same era as the errant tech. As a result, the JLA are more set pieces than evolving characters. There are some great interactions, especially during a sort of "getting to know you" dinner at the JSA HQ, but a lot of the appeal of those meetings is either due to the reader's knowledge that the JLA knows things that they're not telling the JSA or the juxtaposition of societal norms of 1941 confronted with different norms of 2000. With no minority members in either group, we don't have any direct discussion of differences in racial norms, but Peyer manages to get in some well placed remarks involving women and a stand in for race with the alien Martian Manhunter.
I haven't read many stories involving T.O. Morrow over the years, but he always struck me as a sort of stock character with a typically deterministic name. But in this story, like in 52, he's a more fully realized character. He's not a bad guy just because he's a bad guy, or even because his parents gave him a dumb name. He's a bad guy because he came out of childhood a dangerous combination of damaged goods and brilliance, further magnified by his experience as sub-human in the far future. His motivation for changing his present so that he's the undisputed ruler is perfectly understandable in his narcissistic world view. It's all about using his brilliance to make the world better for himself without regard to the consequences for others. 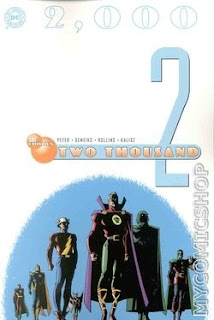 And the JSA are aghast at the world the JLA is trying to save. Through the powers of the Spectre they see avarice, strife, conflict, and immorality in that world. I thought it appropriate and telling that Peyer would have the JSA view WWII as a terrible thing to be avoided at all costs, whereas we now view WWII as a necessary evil, but ultimately beneficial in many respects. I also found the JSA's shock at the dismantling of many of FDR's New Deal programs and the perceived abandonment of the poor in character with a bunch of heroes formed almost in response to the New Deal actions. The Reagan and Clinton roll backs on programs for the poor would seem cruel and unforgiving, rather than attempts to make the poor more self sufficient. Reading it now it makes me wonder what that JSA would think of the deregulation of investment and savings banks that occurred in the Clinton years, the consequences of which wouldn't be felt unitl 2008, though they were easily predicatable when enacted.
The JSA doesn't think the JLA is necessarily a bad group, though they distrust the JLA because of the information the JLA has witheld and the attempted theft of future technology the JSA had obtained. Nonetheless, the JSA determines to fight the JLA's effort to retrieve all the tech Morrow has sent back to 1941 in order to prevent the terrible future that the JLA represents.
In the second issue the JSA sets out to do just that, though they soon lose the Flash, who forsees the problems with using the future tech. Morrow also steadily loses control, and in fact, the JSA takes control of his program, only to result in a more repressive and depressing 2000 than the one they sought to prevent or the one Morrow had created. Their 2000 ends up being ruled by corrupt heirs to the JSA who manifest combinations of their powers and seem to number close to a small army. Morrow attempts to salvage his vision of his own 2000 by going back to 1941 and killing his mother, but he's prevented by the JSA Flash, who shows him that's a line even he can't cross. As a result, with Morrow's knowledge of where he dropped different future tech in 1941, the Red Tornado's mapping of changes from the 2000 the JLA had known, and the use of a time travel device called M.O.R.R.O.W., the JLA retrieves all the future tech and reclaims its 2000.
It's a story that ends up with the status quo unchanged, but it was a good journey getting there. Peyer provides individual character voices to each of the myriad characters in this yarn, even with the JLA having more minor roles. The JLA's role does expand significantly in the second issue, where there's alteration between 1941 and 2000, whether the JLA version, the Morrow version or the JSA successor version. It's interesting tht Peyer posits that the JSA succussors were corrupt from their founding because they did not earn their powers but were handed them. Given that the JSA tales told at that point featured a team that had the children of members, who were born into their powers, this presumption seems to be one that could easily be disputed, but for the sake of this story, and the small part this element played in the overall story, it's something that can be overlooked.
Altogether the story was a nice exploration of the ethics involved with technological developments and the differences in perceptions of society depending on not only the era of the person but also the person's approach to life and the handling of conflicts. All of the JSA view the JLA's 2000 askance, but the Flash and then Dr Fate also question the course lead by the Spectre to change that 2000. Other members of the JSA fall along a spectrum between blind obeisance to the Spectre's goal and outright fighting against that goal as the Flash does. While the destination to the status quo is foreordained, the journey that is the development of the JSA members, including the Spectre, is a trip worth taking. Best of all it was a time travel story that didn't give me a headache, a rare feat indeed.
Semeiks's pencills, along with Rollins's inks and Kalisz's colors presented the story cleanly and kept the flow moving. Facial differences weren't pronounced, but with almost everyone wearing a distinctive costume, it wasn't overly necessary, either. It had a nice combination of modern and JSA era feel to it. I suppose my major query is why DC didn't reverse the covers for the two issues. The first issue cover features the JLA, while the interior story features the JSA. The second issue cover features the JSA, but the interior story features more balance with the JLA. Picky, I know. And when have comics covers been an accurate representation of what's going on inside? Still, I want to know.
Posted by Thomm at Sunday, November 22, 2009