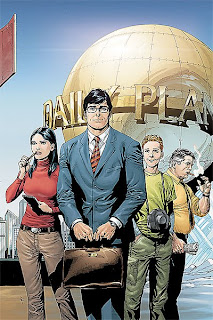 Format : 30 Pages of Story and Art


Not only is the actual issue itself well done, the story beats and the structure of the entire mini-series is also well done. If the complaint before was the first two issues were too much a reflection of the Smallville show, then the complaint this issue is it was too much like the first Superman movie with Christopher Reeves.

The comparisons are inevitable as Johns and Frank are obviously paying tribute to that movie and incorporating the Clark as the clumsy nerd persona into Clark moving to Metropolis and getting a job with the daily planet. In addition to that Frank has used Reeves as his model for Superman and manages to pull off the classic Superman looks along with the essence of Chris Reeves’ Clark Kent and make it work.

Let’s start with the cover of this issue, which throws me off as we have Clark, Lois, Perry and Jimmy all on the cover with the Daily Planet globe as the backdrop. A perfect cover to tell us what part of Superman’s life we are focusing on here, but the look in Jimmy’s eyes as he looks at Clark should be either reserved for Superman or Jimmy is no longer straight and he has a crush on Clark. Not a big deal, it was just a small thing that threw me off as I started to read the book.

Johns starts off with Clark looking on the sidewalk in Metropolis in awe of all the big buildings and the farm boy is dazzled by the big city. Having visited and then worked in New York City for a little while, Johns captures the essence of the jaded nature of the citizens and the awe of the tourist. We also get a clear picture of how important Lex Luthor has become as apparently he chooses one person a day to fix their life. This has become a lottery and a mass of humanity is awaiting Luthor’s grand entrance into his building everyday. I thought this was great as it plays into what type of ego Luthor has that would want him to have his subjects hailing his name everyday. He is a King, but one that has to be brought and paid for, great stuff. It packs in tons of characterization without doing it as exposition and it is part of the narrative form of the story. Johns is growing more and more and his writing ability is now extremely strong.

The next segment of the story is also done to a “T” as we get to see the Daily Planet. It is a down on its luck paper that has apparently lost the war against Lex Luthor and has been emasculated by its publisher. We get to meet Lois Lane, Perry White, Steve Lombard, Cat Grant and Jimmy Olsen. All much younger then they are now and all trying to survive against the odds. Jimmy is an intern working for no pay trying to become a photographer and we learn he has dropped out of school. Perry is the editor who knows his business, but was the one who went after Luthor trying to expose him and lost, causing his paper to now be playing it too safe. We still see how smart he is as he is trying to mold Lois into the journalist he knows she can be. This Lois is a cynical woman, who has no objectivity when it comes to her reporting and Perry points that out as a problem. Without ever having to actually say it we can see where this is going. When Superman appears the Planet’s coverage of him will save the paper. Lois will lose her cynicism, but keep her skepticism, Jimmy will get the pictures of Superman in action to help him become the newspaper photographer that he wants to be. None of these points are stated at this time and since this is a “not so secret origin” it does not matter if certain things are telegraphed as we already know where some things are going. What we did not know is where each character was in their life when Clark first comes to Metropolis.

The final story beat involves Lois grabbing Clark and dragging him into a harebrained scheme of hers to get into a press conference held by Lex Luthor. The Daily Planet has been banned from covering them so she uses Clark as a distraction as she tries to get into the conference. Clark is stuck on the ground below as Lois is at the rooftop press conference. The security team identifies her and then through a series of mishaps Lois falls off the side of the building. This leads to Clark going into the alley and the classic opening his shirt to see the Superman costume underneath. He of course saves Lois and now the world knows we have a Superman. The story ends with Clark remembering advice from his Dad that once he reveals himself to the world he can’t take it back and Clark is worried he may have made a mistake.

Another nice touch was never once seeing Lex in the book. He is a presence and a major element of everything that is happening, but we never actually see him. Also the big invention is a suit of armor made of metallo and the armor has both purple and green in its color mix. I loved all of these little things that foreshadow other parts of Superman’s history that we know are coming into Superman’s life down the line.

The artwork is again outstanding. Gary Frank has eliminated his penchant in making his woman a little garish and Lois looks great. He spots some great one page panels and mixes in some wonderful sight gags. Gary Frank, along with inker Jon Sibal, has elevated their game with this series. Gary has always been on the photorealistic side of things, but the depth of detail in this book is amazing. The layouts are spot on, the character designs are all wonderful, he makes everyone age appropriate also, which is difficult to make someone look in their 20’s but not too young or too old. Also his expressions are so well done that often words are superfluous and to Johns’ credit are kept to a minimal as he knows when to let Frank tell the story. Finally Brad Anderson’s coloring is beautiful. It is the super hero palette but the color intensity level has been turned down a few notches keeping it a little more real and enhancing the book and never overwhelming the art.

Overall Grade – A. This was a wonderful re-telling of a tale well known to all, but since continuity has been a fluctuating element for Superman, a needed one to let us know what is “in continuity” and what is not. Johns continues to grow as a writer and Frank is matching Johns’ script.
Posted by Jim at Thursday, November 26, 2009