Jim: This is the first month in many, many moons that I’m not getting a single hard cover from DC. I was tempted on Newsboy Legion, but I have tons of Golden Age material and only a few things would tempt me anymore for Golden Age.
Lee: I can’t believe that you aren’t getting a single hc. That must be a record of some type.
Gwen: Jim really needs his own library at this point he has so many hardcovers.

THE ATOM & HAWKMAN #46 Written by Geoff Johns Art and cover by Ryan Sook
The Atom has been in the center of the BLACKEST NIGHT storm since day one. But now that storm becomes more personal than he could ever have imagined when he is hunted by not only the Black Lanterns Hawkman and Hawkgirl, but Black Lanterns Khufu and Chay-Ara! Don’t miss the meltdown in another of this month’s one-issue revivals of classic DC Universe titles!ONE SHOT • on sale January 27 • 32 pg, FC, $2.99 US 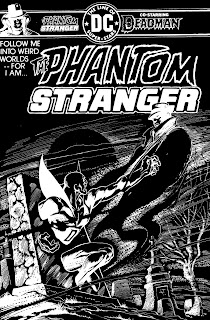 THE PHANTOM STRANGER #42 Written by Peter J. Tomasi rt and cover by Ardian Syaf & Vicente Cifuentes
Spotlighting the DC Universe’s magic-based characters! The Phantom Stranger, with Blue Devil at his side, battles the Black Lantern Spectre with little hope of success. Meanwhile, Black Lantern Deadman delves into the Phantom Stranger, compelled to learn the mysterious hero’s true origins. But what dangers will arise if the Phantom Stranger's enigmatic past is revealed? Find out in another of this month’s one-issue revivals of classic DC Universe titles!ONE-SHOT • on sale January 20 • 32 pg, FC, $2.99 US

THE QUESTION #37 Written by Greg Rucka Art by Denys Cowan & Bill Sienkiewicz Cover by Cully Hamner
A BLACKEST NIGHT tie-in! Greg Rucka (DETECTIVE COMICS, CHECKMATE) joins original THE QUESTION series artists Denys Cowan and Bill Sienkiewicz for the return of Vic Sage! The Black Lantern rings have made their way to earth and disturbed the grave of the original Question. Now, the faceless man returns as Black Lantern Vic Sage targets his former protégé – and current replacement – Renee Montoya. It's the Question vs. the Black Lantern Question vs. Lady Shiva in the ultimate throw-down! ONE SHOT • on sale January 27 • 32 pg, FC, $2.99 US
Jim: These are three of the eight one shots that DC is releasing in January, the skip month for the main event Blackest Night. I believe this was a planned break for the series, but I’m not sure. Still I like the idea of digging up old titles and making a series of one shots related to rising the dead titles as well as characters.
Lee: There is definitely a line in which market saturation is mitigated by a good story. If/when Marvel does this both of us skewer them. But now, because you like BN, it’s ok. I still think it’s a greedy money grab but most people seem ok with it.
Jim: It is a greedy money grab so your comment is valid, but if the stories are good I can tolerate it better and DC is making these $3 and not $4 books.
Gwen: Paying for comics is paying for a good story - it's all a business so as long as you get what you pay for it shouldn't be an issue. 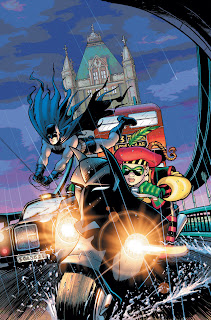 BATMAN AND ROBIN #7 Written by Grant MorrisonArt by Cameron Stewart Cover by Frank Quitely
Knight, Squire and DETECTIVE COMICS’ Batwoman guest-star alongside The Dynamic Duo in “Blackest Knight,” a 3-part story illustrated by Cameron Stewart (SEVEN SOLDIERS OF VICT0RY: MANHATTAN GUARDIAN). Readers who enjoyed BATMAN R.I.P. and FINAL CRISIS won’t want to miss this captivating new storyline packed with additional clues on the Domino Killer and the details surrounding the “death” of Bruce Wayne!On sale January 27 • 32 pg, FC, $2.99 US
Jim: I’ve been really enjoying have Dick as Batman and sort of hate to see that we are already dealing with the “death of Bruce Wayne”.
Lee: It’s just clues. It’ll take months to resolve the storyline. Better to start solving now than letting it linger for another year or more.
Gwen: I agree with Jim on this one. Honestly they could keep Bruce dead and I'd be fine with it. 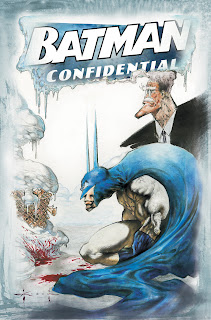 BATMAN CONFIDENTIAL #40 Written by Sam Kieth Art and cover Sam Kieth
There’s a new killer prowling Gotham City preying on the homeless. Batman has his suspicions, but is his normally rational mind playing tricks on him? When The Caped Crusader finally meets his suspect face-to-face, he finds that the creature knows much more than he should. Prepare for a stunning 4-part storyline written and illustrated by fan favorite Sam Kieth!On sale January 6 • 32 pg, FC, $2.99 US
Jim: Sam Keith has been doing a lot of DC work lately. I love his art and I laugh as he draws Batman’s ears longer then Kelly Jones.
Lee: I agree! Keith’s Batman is excellent. I don’t know if I like the ears or the chins better. Kieth’s Batman needs a fancy hc like DC did for Sale’s Batman.
Gwen: I was never the biggest fan of bunny eared Batman but I will agree that I laugh when I see it. 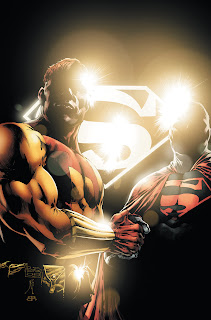 OUTSIDERS #26 Written by Dan DiDio Art by Philip Tan & Jonathan Glapion Cover by Philip Tan
After the horrifying events of BLACKEST NIGHT, Katana and Black Lightning are dispatched to deal with a terrifying disturbance on the open seas. Meanwhile, Geo-Force is recalled to Markovia to handle affairs of state. But when Prince Brion makes a deal with a certain Kryptonian to join the team, the Outsiders find themselves cast as enemies in the eyes of the world! Don’t miss the debut of the all-new creative team of DCU Executive Editor Dan DiDio and hot artist Philip Tan (BATMAN AND ROBIN, GREEN LANTERN)!On sale January 20 • 32 pg, FC, $2.99 US
Jim: Odd to see Dan Didio, the Executive Editor of DC, take over the reigns on a title. I wonder if his day job is shaky after the recent reorganization at DC.
Lee: Or it’s just a fill in until the new regular writer gets on board.
Gwen: Hah, this will be interesting to read... 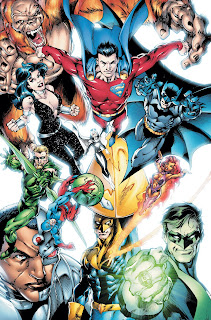 JUSTICE LEAGUE OF AMERICA #41 Written by James Robinson Art and covers by Mark Bagley & Rob Hunter
Be here for the start of a new Justice League era! The JLA have been getting a pounding in the last couple of months, but NO MORE! The team regroups with a new roster that will transcend time and space! Make way for the World’s Greatest Heroes – Batman, Green Lantern, the Atom, Green Arrow, Donna Troy, the Guardian, Cyborg, Mon-El, Starfire, Dr. Light and, yes, Congorilla! This issue features two covers by Mark Bagley which are seperately orderable. Cover A features Green Lantern and Green Arrow; Cover B features Batman and Mon-El. The cover images will be revealed online before the issue’s Final Order Cutoff date.On sale January 20 • 40 pg, FC, $3.99 US
Jim: Are you kidding me? This line up is like the Wolfman/Perez Teen Titans grown up with a couple of old time JLA’ers thrown in for good measure.
Lee: That was my thought exactly when I saw the line up. This is terrible. It has potential to rival the JL – Detroit lineup. It’s like DC has never figured out what to do with the Titans now that they have grown up. AND… don’t think I’ve missed the irony with you complaining about this. To wit, I believe you can be quoted as typing “Bruce Wayne never gets old, he needs to go away.” Yet, when DC replaces the JLA, you complain.
Jim: There is a way to do it right and a way to do it wrong. This feels wrong.
Gwen: Hey, I'm fine with anything that has a Legion member in the lineup! Although I think that my favorite JLA stuff in the past few years has been the animated stuff. 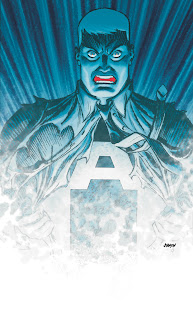 THE MIGHTY #12 Written by Peter J. Tomasi & Keith Champagne Art by Chris Samnee Cover by Dave Johnson
It’s Gabriel Cole vs. Alpha One at last! It’s a battle between one man and the most powerful being on Earth… but it’ll be a lot more brutal than either expected, and Alpha One’s labyrinthine headquarters holds one more surprise! The epic tale of THE MIGHTY concludes here!FINAL ISSUE • on sale January 6 • 32 pg, FC, $2.99 US
Jim: I just hope they were given enough time to wrap this up as I don’t think 12 issues were all they were hoping for on this series. On the flip side the story needed to have an ending and this could be good.
Lee: I hope they make it a shiny hc. I doubt it and I’ll be happy with the trades, but I’d like the nicer format.
Gwen: I'm not really into this so I don't have much to say. 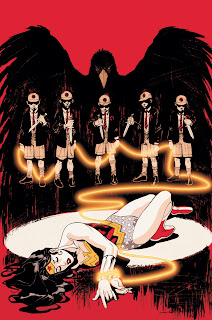 WONDER WOMAN #40 Written by Gail Simone Art by Aaron Lopresti & Matt Ryan Cover by Aaron Lopresti
Wonder Woman faces The Crows! Five mysterious young men with a dark and terrible secret have arrived on Paradise Island with one mission: To kill Wonder Woman!On sale January 27 • 32 pg, FC, $2.99 US
Jim: Lee says this cover has to do with an old AC/DC album cover. I was not a heavy metal guy or at least I never got their albums so I’m taking Lee’s word on this one.
Lee: It isn’t an old cover, it’s a swipe of Angus Young from AC/DC. Well, maybe not a swipe but at least a homage. There is no doubt about that.
Gwen: I just thought it was another Wonder Woman bondage cover. Silly me. 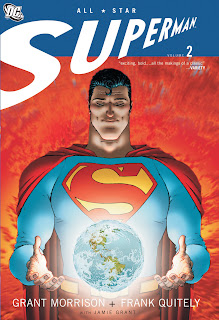 ALL-STAR SUPERMAN VOL. 2 TP Written by Grant Morrison Art and cove by Frank Quitely
The New York Times bestseller from the team of writer Grant Morrison and artist Frank Quitely (BATMAN & ROBIN) is now in trade paperback!In this follow-up to the award-winning ALL-STAR SUPERMAN VOL. 1, the Man of Steel goes toe-to-toe with Bizarro, his imperfect duplicate, and the new Zibaro, also from the Bizarro planet. Plus, more exciting adventures that take Superman across the universe and back in these tales from ALL-STAR SUPERMAN #7-12. Advance-solicited; on sale February 10 • 160 pg, FC, $12.99 US
Jim: Memo to DC: Screw this crap, give me my Absolute Edition of this series! NOW!
Lee: Memo to Jim: DC doesn’t listen to old cranks like you. But, I bet this does get an absolute some day.
Gwen: Patience Jim, patience. 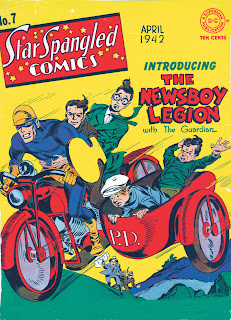 THE NEWSBOY LEGION by JOE SIMON AND JACK KIRBY VOL. 1 HC Written by Joe Simon and Jack Kirby Art by Joe Simon, Jack Kirby and others Cover by Joe Simon and Jack Kirby
Originally featured in STAR SPANGLED COMICS #7-32 (1942-1944), The Newsboy Legion stars a group of scrappy boys who fight crime in their home of Suicide Slum. Watched over by adult hero The Guardian, The Newsboy Legion battles crime through their own newspaper, taking on crooked politicians, slum lords, fifth column agents and much more.Advance-solicited; on sale March 24 • 360 pg, FC, $49.99 US
Jim: I have enough Golden Age stuff that encompasses this type of material. It is Simon and Kirby, but the Newsboy Legion, not so much of a draw.
Lee: You may not want it but I do. Old Kirby is sometimes better than newer Kirby. While not a fan of the newsboy legion I’m excited to get this book.
Gwen: I'm not sure what the appeal of this is... I guess I prefer Golden Age superhero stuff if anything.