Dynamo 5, the Hoped for Return

Due to a glitch - this was accidentily posted for a little while last week and was meant for today!

With Dynamo 5 going on its hopefully brief hiatus, I figured I'd re-read the entire 25 1/2 issues, plus the annual, to see if it held up in a more or less single read as well as it did in my memory. Fortunately, it did. 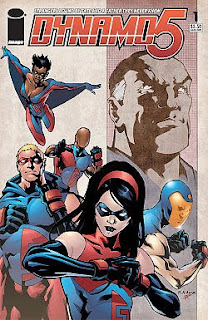 Regular readers will have heard Pops sing the praises of Dynamo 5 on occasion, but really, it's one of the best team superhero books created. Right off the initial premise it was something different. The Fantastic Four was the first of the family as team books, and obviously the most successful, but no one has really expanded on that idea over the years. Sure, lots of characters have various family members end up with powers of their own, whether it's Bruce Banner's cousin, Barry Allen's nephew (by marriage), or even Reed and Sue Richards's kids (though I haven't read the FF in awhile and don't know if the kids have powers these days). Sometimes the original and the relative will work together, and sometimes they'll even be on a team together, like in the JSA, but they don't form the entirety of the team. There's always more unrelated than related people on the team.
When Jay Faerber and Mahmud Asrar created Dynamo 5, the former writing and the latter drawing and inking, they created a whole new family dynamic and a whole new superhero team dynamic. Five of the who knows how many bastard children of the dead Captain Dynamo, a middle aged superhero with libido issues commensurate with his power levels, are a great set-up for many, many years of great stories, and I can only hope that hte almost three years that we have are not the end of the line. 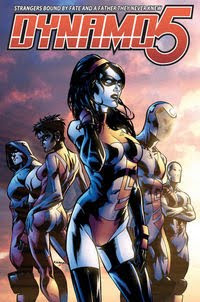 Here's the basic set up. Captain Dynamo got his powers from a radiation accident, a la Daredevil, but with powers more akin to Superman. Strength, flight, speed, force beams and other vision abilities, and the wildcard of shape shifting, limited to human forms. He married a newspaper reporter, too, though unlike Lois Lane, his wife is just a reporter as a cover for her actual occupation as a secret agent for a governmental security agency, akin to the FBI. They spend many years together, and she's retired by the time the book starts. In fact, he's dead by the time the book starts, killed while engaged in a tryst with what turns out to be a superassassin. This demise, combined with widow Maddie Warner's discovery of Captain Dynamo's little black book, results in her locating 5 kids, who range from high school to college graduate in age, who are most likely children of her late husband, with whom she had no children. A brief gathering and dose of the same radiation that gave Captain Dynamo his powers, and the 5 half siblings each have one aspect of their late, unknown father's powers.
From there it's learning to work together as a team and coming to grips with an entirely new family dynamic. Faerber's choice of Dynamo as the nom du guerre for his patriarchal progenitor was, I expect, no accident. The series is all about dynamics, after all. Of course, any good team book is. Sure, the battles against various enemies is a prime element in group superhero stories, and there are plenty of those here, but a good group story has to be about how the members of the group interact. Faerber does that par exsalonce. 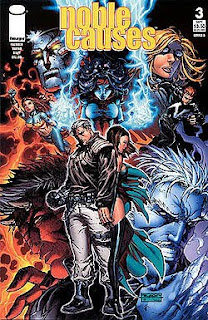 That should come as no surprise to anyone who read his previous series, Noble Causes. That too was a family as superheroes book, but he played that one more straight in that the family members were a husband and wife and their children. It was also different in that it played off the soap opera nature of so many superhero books, what with the black sheep child who was/wasn't a bastard child of the wife, the back from the dead in a robot body child, and the opposite number evil family that were their main opponents. Often times there wasn't much super action involved in the sense of the straightforward fighting of people trying to commit crimes so much as internicine battles between Nobles, all told largely through the perspective of the normal human who marries into the family. Faerber even took a big leaping twist into alternate universes, a long time stock item of DC and Marvel taken to a different extreme, somewhat akin to Krikman's use of the concept in Invincible. Sadly, Faerber ended that series not too long ago, saying he didn't have any more ideas to explore with it. A shame, and something I'll look at in more depth some time in the future.
Back to Dynamo 5. I'm happy to see that Faerber intends to keep going with Dynamo 5 and hope there won't be much delay on it. He says that he wants to give a new, as yet unanounced artist time to work ahead so that a monthly schedule is more feasible. I hope that's really all there is to this end of Dynamo 5. So far Faerber has grown his characters fluidly and with an internal logic that's hard to come by in the superhero world. The 5 kids have grown into their roles, and at the end of th run are thrown a curve ball of adapting to a shuffling of the powers between them by a very nice deus ex machina, I might add. Along the way the group had a brief break-up and a substitute goup using the same name took to the streets to protect their home base of Tower City. Some of the group's families who raised them know of the Captain Dynamo connection, but others do not. One has to deal with the specter of infidelity, though the possibility that Captain Dynamo masqueraded as the cuckolded spouse provides some comfort.
Captain Dynamo may well be the most dynamic dead character ever to appear in a comic. H 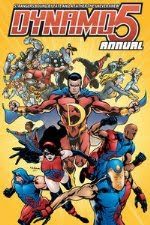 e doesn't come back from the dead, either. At least not so far. Nonetheless, he looms large throughout the series, for his actions as a cad as well as his actions as a hero. The annual does an excellent job of exploring a lot of that aspect, but it's nonetheless significant in the regular series. In fact, as a stand alone, the annual serves as great reading unto itself, even without reading any of the rest of the series.
But it hasn't just been those 5 who have been well developed. Maddie Warner, the matriarch of the group, has also grown siginificantly, including one issue entirely devoted to her back story and complicated relationship not just with Captain Dynamo but also with her deeply embittered one time fiance. We've also learned that Maddie's prior relationship resluted in a child who shares his father's bitterness toward 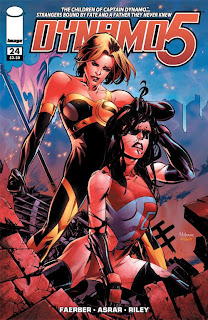 Maddie, and that Captain Dynamo sired another child with his own arch villain, but that child has all of his powers but is, not surprisingly, quite confused about her role in life, having been raised by both a hero and a villain. Even the more minor series characters such as Maddie's former partner with FLAG (the FBI stand-in agency) and his prissy but subversive boss are given a lot of substance.
While many of the group's foes are more about their powers than their personalities, there's quite a lot of hinting at substance and depth there as well. The assassin who took out Captain Dynamo returns with a new employer targeting Dynamo 5. Even the home base of Tower City has a personality of its own, akin to the role that Gotham City plays for Batman or Hub City for The Question. Suffice it to say, the return of Dynamo 5 will be welcomed by me, and I hope its audience will expand with a monthly publishing schedule.
Posted by Thomm at Sunday, November 15, 2009