IDW Publishing
Ghoul #2 by (W) Steve Niles (A) Bernie Wrightson
The Ghoul arrives in Los Angeles and quickly learns that there's more to Hollywood than glitz and glamour-there are also demons invading Griffith Park and a cop named Klimpt, who is convinced an aging starlet is a blood-sucking freak of her own creation. It's the Ghoul versus Demons in this knockdown, drag-out melee of monstrous behemoths! $3.99

Lee: I don’t remember picking issue number 1 which is surprising. But, it’s already been released. So either, the book is bi-monthly or IDW is listing things closer to actual release. I hope it’s the later because a bi-monthly publishing schedule will kill this book. Other than that, Jim says it’s good.
Jim: This was an excellent first issue. I don't think bi-monthly will hurt this book because the mini-series is just underwriting the hard cover and the trade. I just hope this is the first in a series of mini-series as Niles and Wrightson have done two prior series that never went any further but should have. 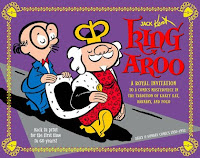 King Aroo Vol. 01 HC by (W/A) Jack Kent
The Library of American Comics proudly presents a long-neglected classic-King Aroo! Lauded by critics in the pantheon of great strips such as Krazy Kat, Pogo, and Barnaby, Jack Kent's brilliantly conceived world brought smiles to young and old alike with its fanciful array of clever puns, visual humor, and good old slapstick. Includes a text feature by Bruce Canwell, and an introduction by Sergio Aragones. Volume One celebrates the strip's 60th anniversary by presenting every daily and Sunday strip from the beginning in 1950 through 1952. $39.99
Lee: Aroo is a classic daily strip that ran from 1950 through 1964. It’s revered among the strip enthusiasts and from the examples I’ve seen, I agree. It a very fun read, and another case study in how to create art from the simplest of lines. I’m looking forward to this.
Jim: This is one where Lee and I will have to part company. I have any so much of my budget and time I'm willing to put into strip material and this does not make the cut.

Veil Vol. 01 SC by (W) El Torres (A) Gabriel Hernandez
Meet Chris Luna, a cheap private eye with a client list of the dearly departed. Chris has the unique ability to sometimes pierce through The Veil between our realm and the unknown beyond. Unfortunately, it doesn't really pay the rent. Now Chris is broke and has to return home to Maine... and face the darkness that now lurks beneath the surface of her quiet hometown. Includes bonus materials and an Ashley Wood cover gallery. $17.99
Lee: IDW continues to publish one great story after another. Hernandez is a great artist and the premise sounds awesome, so I’m sold.
Jim: IDW is a publisher that you can trust. That doesn't mean every book they do will suit your taste, just that you can take a gamble with less then you might for other publishers.

Wizard's Tale Vol. 01 HC (W) Kurt Busiek (A) David Wenzel
A magical story of redemption! The Wizard's Tale is the story of the aged Bafflerog Rumplewhisker and his young companion, Muddle, the woodcutter's son, as they embark on a quest to retrieve the magical Book of Worse-a tome that will ensure the land of Ever-Night remains as it is, a dark and gloomy realm of evil. But old Rumplewhisker's heart slowly warms on their journey, and a chance to restore a semblance of goodness to Ever-Night is possible-If he and his young charge can dare face the challenges ahead. 136 pgs. $24.99 See Wenzel’s art here.
Lee: I really interested in this but I believe it’s a book with spot illustrations. I say that because, while a great artist, I don’t think I’ve ever seen a sequential page by Wenzel. It seems like a great story ala Asprin’s Myth Series. This falls into the ‘maybe, if I have extra money’ pile.
Jim: This falls into when "hell freezes over" pile for me. This is just not my type of material. 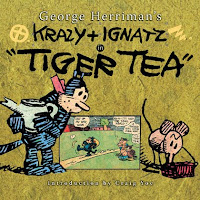 Krazy & Ignatz: Tiger Tea HC (W/A) George Herriman
Krazy Kat's most surreal adventures were the famed Tiger Tea sequence where Krazy Kat imbibed a psychedelia-inducing substance. This is George Herriman at his best in the only full-length Krazy Kat adventure story of his career presented in the same era as Terry and the Pirates and Captain Easy. Krazy & Ignatz in Tiger Tea showcases a rare photo of Herriman sporting a Mexican sombrero and smoking a funny looking cigarette, a perfect addition to this fun, classic trip down memory lane. $12.99
Lee: This is perfect for me! Somewhere along the way I missed Krazy Kat. The entire run has been reprinted but I don’t have any of it. At this point, I really just need a ‘best of’ collection, and this appears to be it. If I like this, I can go get the other material but this is good for now.
Jim: I agree! Krazy Kat is a strip I have wanted to read, but never was willing to jump all in, this is a nice way to see a section of the work and determine if I want more or not.

Last Gasp
Town of Evening: Calm Country of Cherry Blossoms HC by (W/A) Fumiyo Kouno
What impact did World War II and the atomic bomb have on the common people of Japan? Through the eyes of an average woman living in 1955, Japanese artist Fumiyo Kouno answers these questions. Her light, free style of drawing evokes this difficult period in Hiroshima's postwar past. As the characters continue with everyday life, the shadow of the war and the atomic bombing linger ghostlike in the background. A best seller in Japan, Town of Evening Calm, Country of Cherry Blossoms is the winner of several prestigious awards and much acclaim. Kouno's beautiful storytelling touches the reader's heart but is never overly sentimental. $14.95
Lee: Last Gasp is certainly not the publisher that I ever thought would handle this kind of material. I always see them as more of an online head shop. Anyway, this looks to be some great historical fiction. The story is actually made up of short interconnected tales which should add lots of perspective. Another book loaded with awards means I’m sold!
Jim: It is an odd choice of publisher for this work, but I have grown to love seeing history through the eyes of people who actually lived it. 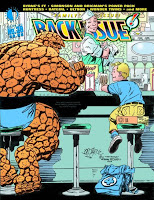 Back Issue #38
Back Issue spotlights an in-depth look at John Byrne's influential, much-reprinted work on Fantastic Four - featuring a Norman Rockwell-inspired Thing and Franklin Richards cover by Byrne! Plus, Louise Simonson, June Brigman, and Jon Bogdanove go Pro2Pro on Power Pack, Paul Levitz and Joe Staton reflect upon the Huntress, and art and artist's commentary from the likes of Rich Buckler, Kurt Busiek, and others. $6.95
Lee: If you have any interest in older comics, or if you grew up with comics in the 70’s and 80’s, then this is the magazine for you. I remember reading Byrne’s run on FF as it came out every month, and it still brings back fond memories. Even though I’m pretty sure I’ve read every interview Byrne regarding the FF I’m still getting this. This is just a great magazine.
Jim: The few issues of this mag I have read have been decent, but I find that it has to be a subject I have a deeper interest in then Byrne's FF run. 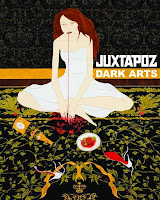 Juxtapoz: Dark Arts HC
This collection of works compiled by Juxtapoz features today's most talented dark artists, all of whom create a certain mood or emotion in their work that is uniquely theirs. $29.95 Visit the Juxtapoz here
Lee: If you like media arts then this is a great magazine. It isn’t comics but it’s some amazing commercial art. This collection is a best of, so it’s a great introduction. You’d be amazed at the artists who appeared here first and then suddenly starting doing covers for comics. Good stuff.
Jim: I'm sure.

Lee: As I said a couple of days ago, this was a good month. In other words, it's gonna be expensive when it all comes in!
Jim: Expensive seems to be our middle name. Thankfully we have a retailer who gives a discount or we would be holding cardboard signs out on street corners. "Need money for comic collections."
Posted by Lee at Saturday, November 28, 2009