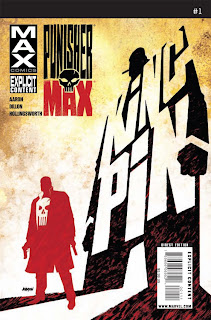 
I pick a very select few books that I want to read first and if I’m motivated by the work to do a review on them. These books are not only books I hope will be good, but are usually first issues or have some other type qualities that make me want to write a review of them. As my real job has pressed me lately I have done less reviews then I would like to do, but this week I got a little more ambition again and the first two books I read have given me the motivation to write reviews on each one.

Let’s start with the art for this book. I have missed Steve Dillon’s art and remember last following it on Wolverine Origins. Steve has a nice realistic style that at times is a little on the static side of things. This tends to make his work fit material like Preacher and the Punisher much better the long underwear set. From over the top graphic violence to the subtleties of facial expressions displaying characters’ emotions Dillon is a master craftsman in his field. His page layouts and designs help to make any story flow. I don’t believe I have ever seen bad work from Steve, it is always top notch and a pleasure to look at and this is his type of story. Matt Hollingsworth on colors is also pretty much a mortal lock on quality. In this book he trends closer to a super hero palette, but never gets into the bold bright style of that genre. Matt’s work enhances Dillon’s art and is so good that it all seems exactly like it should be.

The story itself was also fascinating and Jason Aaron is certainly known for being able to generate a hard edge into his scripts and a little maniac and madness when needed. The one thing that continued to perplex me and pulled me out of the story too often was the timeline. I know Punisher Max is not part of the regular MU, but I thought Jason wanted to bring it closer then what Garth Ennis was doing. Garth’s Punisher felt old and very world weary, continuing to fight his war because there was nothing else left for him. His world consisted of only humans; the super human was not in this universe. The MU Punisher is young by comparison and feels like he is still committed to avenging his family by whatever means it takes. The super heroes and all the wild insanity of a super powered world is the norm to him. When I was reading that Aaron was doing the origin of the Kingpin I thought we were going back in time in the regular MU. Instead references are made to Garth’s run on the book and the mob is talking about the Punisher being on their tail for 30 years. This Wilson Fisk is a young man who is manipulating the mob to make him into a Kingpin. Not that this story can’t work, it can, I’m just trying to determine if there is a place in time to put this version of Frank Castle. If this is Garth’s max Punisher he felt too young and was missing the gravitas that Garth’s Punisher exuded. If the MU, then it really does not work as Frank being after the mob for 30 years and Wilson Fisk just starting does not line up at all. It may sound like I’m nitpicking but I like to know what the set-up is to what I’m reading. If I accept this is the Max Punisher of Ennis’s run and that in this world Wilson Fisk is just starting out, then the story works a lot better. Maybe my own assumptions took me out of this book and I should have gone in a little colder as a little information can be dangerous.

Reviewing the story from that perspective it will be interesting to see Wilson Fisk grow into an enemy that Frank can’t beat. In this issue we are introduced to a young Wilson Fisk who is both a massive physical presence as well as an extremely smart and manipulative man. He is satisfied to be the man behind the man as he works to take over all of the mobs and run them as “The Kingpin”. There is a great over the top scene where Wilson squeezes the eyeballs out a guys head. Another good scene was when Fisk has a shot to take out Frank and does not take it. The star of the story was Wilson Fisk and for the first issue that was okay, but I hope Jason remembers the title is Punisher Max, not Kingpin Max. Finally is this is the max Punisher world, there is no reason why we can’t have this end with Wilson Fisk being killed by Frank.

A strong first issue, despite my one misgiving that I rambled on and on about, with strong art work makes this a book to add to my list. It would be even better if it was $3.

Overall Grade B – Frank’s back, but now he has to deal with the rise of Wilson Fisk, The Kingpin.
Posted by Jim at Thursday, November 12, 2009