Not a comics review today, but at least it was tangentially tied to comics, as I see that the 2009 version of The Prisoner was promoted at both the 2008 and 2009 San Diego ComiCon.
My exposure to the original British series from 1967 is limited to snippets here and there. My first exposure to the show was through Iron Maiden's song about the show, metal head that I was as a teen. "We want...information," and "You are the new Number 6", taken from the show's disembodied voice, in classic British accents, made for a great lead in to the song. Having read a little on the series, I see it didn't last much more than the 6 hours the new mini-series runs. At 17 episodes, this high concept didn't go very far, but had a lasting impact.
What I'm saying is that coming in to the 2009 version of The Prisoner, I'm coming into it fresh, with only the ambiance of the original having any influence on my view of the new version. No nostalgia for the original. No longing for an unfinished story of 42 years gone by. Good thing, too, as the new series had little to do with the original. 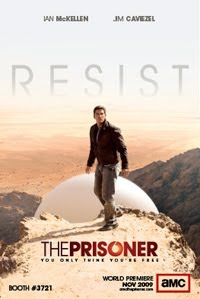 AMC, along with British ITV (the original station of the original show), created this new version. AMC showed all 6 hours over 3 consecutive nights from November 15-17. If you missed it, don't sweat it (presuming you want to see it after reading this). It's basic cable. It's bound to be on repeatedly, not to mention going to DVD lickety-split.
While the original show starred a British spy who resigned and was taken as a prisoner to a mysterious Village of unknown location, the new show stars American Jim Caviezel (Jesus in Mel Gibson's gory tale of the crucifixtion) as a corporate employee in NYC who resigns, ostentatiously, from his job somehow related to security or intelligence. I suppose it's supposed to be a Halliburton stand in or some such. Like any good tale of mystery, it starts with its star arriving at his unknown prison. Sort of. He actually shows up in the desert around the prison, waking up lying on the ground just in time to see an old man being chased and shot at by armed men. The soon to be Number 6 is a distance away from both the old man and the chasers, so he works his way toward the old man while seeking cover. He comes upon the old man in a small cave, and the chasers are unexplainedly gone.
The old man tells him to seek a number, I don't recall which now and am not going to hunt for it. I know the number is the designation for a waitress in The Village, but she becomes of little import as the show wears on, so I don't know why the old man thought it important to find her. Anyway, the old man, whose number I also don't recall, dies shortly after 6 finds him. Six then buries him and continues walking until he finds the Village, where all the residential structures are identical, triangular and pink. They're also neatly arranged. To my mind the Village brought recollection of the planned Florida town used as the setting in The Truman Show, a much better telling of manipulation by unseen forces and the struggle for self determination.
The main problem with The Prisoner is that it's so damn obtuse. It's much enamored of flash backs and non-linear story presentation, as well as hefty doses of self absorbed symboli 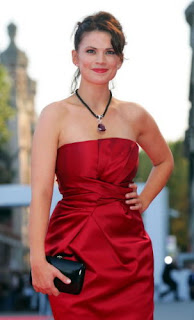 sm. I have no idea what 6's motivation is. We don't know why he quit, other than that he discovered some sort of information on another, secretive floor at his employer. He apparently seizes that as an opportunity to buy a six pack and get drunk but picks up a hot stranger on his way home. In fact, said hot stranger is the high point of the show. Lucy/415 is played by Hayley Atwell, a British actress playing an American who is, in my opinion, the hottest actress I've seen since Catherine Zeta-Jones or Salma Hayek. She doesn't get naked for this show, but according to several web sites she's not shy about shedding her garb, so I'm looking forward to catching the full glory of Hayley Atwell some time in the future. The more coy viewing of Atwell certainly gets the imagination going.
Which is probably just about the only time the imagination is stirred in The Prisoner. Othrwise, you're left spending all your time trying to figure out where this mess is going, and even when you get to the end you're thinking "How the hell did we wind up here?" Ian Mckellan, who gets to keep his British accent, plays Number 2, the chief adversary to 6. Ruth Wilson, who also gets to keep her British accent, is Number 313, and the Village's doctor. She's of torn loyalty to both whatever organization 2 represents and 6, who she loves. Why she loves 6, or why 6 has any feelings for her is beyond me. Six has a passionate night with Lucy/415 before he disappears to the Village. That night involves both passionate sex and passionate discussion about what turns out to be their mutual employer, a fact she knew when they met. The next morning, while 6 is buying oranges (which reminded me of "A Clockwork Orange," another superior tale of manipulation by powerful, mysterious forces), Lucy/415 appears to be killed when 6's apartment explodes. So, when the same woman is found in the Village, and 6 rekindles his relationship with her, even though she's now pretending to be blind and without any recollection of their past relationship, it's totally without internal logic, to me, that 6 would abandon his marriage to 415 when 313 kisses him outside the church. Furthermore, 415 runs off, and, after some supposedly deep conversation with 6, throws herself into one of many holes the ground that lead one knows not where.
There's also a bizarre plot thread involving the son of 2, 11-12, who has a gay relationship with 2's top internal spy on dwellers of the Village, which leads to the young man killing his middle aged lover, with the lover's approval. Young 11-12 also eventually hangs himself, which again occurs without any internal logic. The killing of the lover is supposed to have something to do with 2 finding out about the relationship and the suicide has to do with 11-12 waking his mother from a sort of waking dream state that 2 keeps her in with some unknown pills administered daily.
Most confusingly, the entire reality of the Village turns out to be due to this woman being in this fugue. Her waking is causing the holes to nowhere that swallowed 414 and the child of a cab driver who befriended 6. The holes are coming more frequently and threaten to envelop all of the Village. There's interal strife in this otherwise Stepford village, much machination between 2 and 313, and eventually 313 assumes the role of 2's wife as the dreamer who sustains the Village and 6 becomes 2.
I so don't get what was the point of this series. It seemed much enamored of obfuscation. Rather than telling a story creatively and illustrative of whatever point its creators wanted to make, it relied on gimmickry and artistry, in the most negative of senses, to make a pretty picture at the expense of story. While bizarre or muddle created for whatever interpretation a viewer reaches is heralded in the worlds of painting and sculpture, though not to my general taste, it totally defeats the purpose in a medium like TV or film, European existential filmakers notwithstanding. Besides, The Prisoner doesn't seem to have a point, story or not.
Initially it seems to resemble its progenitor in being about self determination. Is the end saying that there is no self determination? Is it saying that sacrifice of free will for the greater good is more important than self determination? If so, why would 6 sacrifice himself or allow 313, who he's supposed to love, allow herself to sacrifice for the preservation of the Village? Up until the end 6 is all about trying to escape the Village to return to NYC. He loathes the Village and its sameness and conformity, as well as the manipulation by 2. Why would he want to save that and become 2? Why not allow the holes to swallow the Village? What little point I can ascertain is not logical to the lead's character. Of course, for a time in the story 6 also works with 2's spy, installing spying equipment on suspect members of the Village, which makes no sense, either.
In some respects The Prisonr reminded me of "The Eternal Sunshine of the Spotless Mind", but at least the latter was striving to show the fragility of memory. I don't know what The Prisoner was trying to demonstrate.
Posted by Thomm at Sunday, November 29, 2009