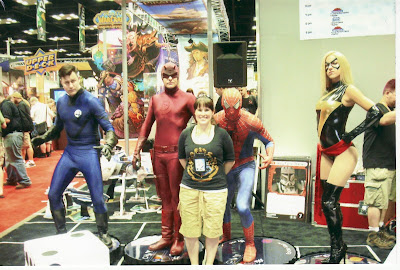 This was my second year attending Gencon in Indianapolis. Last year had been fun despite the creepy motel we were housed in and the last minute planning so my boyfriend and I had decided, with our friend Gary, to plan ahead for 2008.


Thursday was the first official day of the convention. We all woke up fairly early and headed over to buy some generic event tickets and check out the events. André (my boyfriend) had signed up for a L5R CCG card tournament so Gary and I went up to the miniature painting events. They were hosting a free miniature painting event (all supplies provided) and Gary and I decided to participate. I had never tried miniature painting before and was surprised with how much fun I had. Gary's a semi-professional artist and taught me a few tricks and I actual managed to paint a pretty nice mini for my first attempt. I painted a samurai duelist and I even had a professional miniature painter tell me that it was an impressive first attempt :)


Afterwards Gary and I went to the Exhibit Hall for a brief time and then I went off to build a foam sword. That was also fun and entertaining and I ended up making a second sword later in the day per André's request. Eventually André's card tournament was finished and we roamed the Exhibit Hall. I was excited to see quite a few people were at the ASP book and I bought the first volume of Artesia and Mark Smylie was nice enough to sign it for me and talk a bit about the fact that ASP's books are now being published in a timely fashion once again (yay!). He also told me that David Peterson (Mouse Guard) would be by on Saturday and Sunday. We bought a few book marks from artist alley and we saw a trailer for the upcoming Star Trek online game - which while geeky, looks kind of fun.


Friday all three of as went back to mini painting as the Mouse Guard board game was full and the RPG was canceled :( We had wanted to go the the Children's Museum to see the comic book display - and the Batmobile - but sadly it would have cost us about $40 each (cab fees are terrible with gas prices being so high). Gary watch a lot of anime and André and I got to see a live action Heroclix game (see the photo up top for the players). Late that night we also stopped by the OWbN Vampire LARP game and hung out with a friend of a friend talking about what we had seen in the city and such.


Saturday was pretty slow for the most part but the morning was fun. André and I went over to Union Station where an organization called Heroes of Rokugan were hosting a series of L5R (Legend of the 5 Rings) table top games. We still had our characters from previous games last year and even ended up in a group with a player we had met in 2007, Peter. During the course of the game we also made friends with a really nice couple, Maria and Rob. We all got along so well and had such a good time that we swapped numbers and arranged to all play together the next morning (along with Peter and his brother and sister-in-law). Beyond that we made another visit to the Exhibit Hall, met David Peterson who was fun to talk with, and bought a few t-shirts (André still hasn't managed to find the Superman bloody 'S' shirt =/). Then we walked around the city for awhile and I read through Artesia that night (which has really nice artwork!).


Sunday was great. We had our premade L5R group and we had a blast! we all exchanged email addresses so we could keep in contact and try to play together again the next time we went to Gencon (since most everyone was a regular). We got a few last minute things from the Exhibit Hall before it closed (that's when they have the 'pack up' deals) and then went out to an early dinner at the Spaghetti Factory with Gary. All three of us saw Tropic Thunder in the theater that night. It was hilarious! Overall it was a very nice last day to the convention.


This year was definitely even better than last year and if we can swing it we'll try to go again next year, or at least in 2010. For anyone who enjoys ANY type of gaming, from board games to D&D, this is an amazing convention so check it out. I can't wait to go again :)
Posted by Gwen at Sunday, August 24, 2008