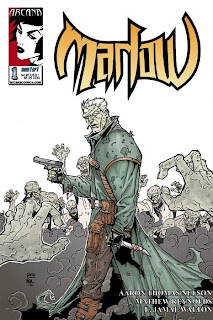 Should be out Wednesday at many stores.

Marlow, for lack of a better word, is a technological Zombie, kept alive by nano-technology. Essentially he was set-up by a giant corporate pharmaceutical company and acts as their “cleaner” to do wet works type of operations.

An operation that needs to be shut down and resolved comes up and he is told that they had sent in a prior team, but “The Russian” has not returned. Marlow gathers his team which includes the weapons and muscle guy, the hot looking female thief and killer and the technological nerd guy. In telling a short story like this I have no problem with using stereotypes to be able to give us a read on a character, otherwise the book would take too long to get into the action.

Marlow and his team parachute into the location and meet the Russian who has switched sides. They meet the scientist who is turning everyone into Zombies so we would all stop the fighting and killing of each other. The scientist has seen much devastation and thinks we would all be the same as Zombies. The group stops the operation, blows up the place and as they leave Marlow gives us a soliloquy of how he reads the whole situation.

The artwork is a rather unique look to it. There are certain pages that work very well; my favorite page is when we met Rox the femme fatale for this drama. The art work relies heavily on just doing silhouettes of the characters and not really giving them definition. The layouts are okay, but the story telling ability of this artist has room for improvement. Also there are almost no backgrounds in this book. Still he gives each character a distinctive look and we know who is who all the time, which is not always true of some artists. I’m not familiar with Matthew Reynolds but I would guess that he is very new to comics.

The actual story was good as a straight action / adventure, but the writer states that he wanted to use the idea of Zombies to tell a larger story about the War on Terror, Globalization and Human Experimentation. He even went so far as the state that as “Heart of Darkness” by Conrad showed that western civilization maybe the uncivilized ones, that Marlow suggest we maybe the Zombies.

I bring this up because I think Aaron was overreaching in what he could accomplish in one single issue of a comic. I applaud the thought process and understand the desire to present your own world view to others, but I think ultimately it hurt the story. This was especially true at the end where Marlow starts to wax philosophically. I find that stories that present a viewpoint as opposed to preaching a viewpoint work better for me.

It was also bold to add the initial proposal to the back of the book as it look poor against the final product and there was no need to leave that as your last impression.

Tagline: It sometimes takes a Zombie and a few friends to save the world.

My final word on this book is that for $5, you could do a lot worse. It does entertain and it does make you think.