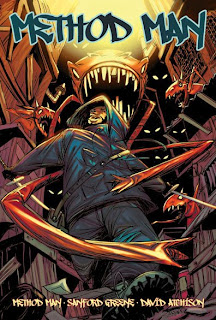 
The hype: An ancient evil of unfathomable power plots the unspeakable--the destruction of the mortal realm and beyond. Man's only hope lies in Peerless Poe, a hard-luck private eye with a taste for booze and a magnetic attraction to danger. A former member of the clandestine Order of the Sacred Method, Poe must forge an uneasy alliance with those who exploited him against enemy bent on global annihilation. This unholy threat wears a woman's face and wields dark energies capable of destroying normal men. But Poe hasn't been normal in years. The Order saw to that. Poe is scarred. Poe is transformed. Poe is . . . Method Man.


I'll start out with the highlights of this book as it's always better the empathize the good over the bad. The art was very well done considering the book was done in black and white. I was impressed by the illustrator's ability to accurately display the character images as distinct from both the setting and the action of the plot. Many times illustrators rely on color to distinguish their images but both the initial pencil work and the shading worked well to make easily accessible and enjoyable imagery.


I also really liked the monsters in this book. While haphazardly biblically inspired the demonic antagonists had fun and unique designs. Actually the Lilith babies were kind of like cute pointy teethed dinosaurs, but they were still pretty cool.


The characters were decently designed although I thought that the female lead, Jeanne, was far superior to her companions both visually and depth-wise.


While the plot was established well enough with a brief opening summary I was hoping for a lot more focus on Method Man as a supernatural detective than as some sort of super powered, Cain-descended, failed monk.


I have to say, that most unfortunately, the plot was very poor in quality. While the scripting was professional enough the story held little to no interest for me. As I said, the set up was decent. Instead of exploring Poe's (Method Man) life and work we're thrown right into his former life coming back to haunt him. Apparently as a descendant of Cain Poe has an ability to go into a berserker rage and gain both strength and regeneration. He also has an obligation to fight biblical monsters as atonement for his ancestor's sin. While fighting Lilith's progeny he gets hired to work with his previous monastic order in the hopes of saving the world. Poe is both belligerent to his former mentor and reluctant to help (though he eventually decides its the right thing to do). It is fairly hard to sympathize with Poe until you discover that he left the monastic order to save a woman's life. To summarize Poe and his mentor (along with another Cain descendant) go on a quest to find the Spear of Destiny in order to fight Lilith.


As I stated, the script was professionally done but the story tried to do too much in too short a span of time. Also, the monastic order of Cain descendants was a pretty silly concept the way it was introduced and it was hard to take to story seriously on any level. It didn't even have the merit of being humorous. The only real positive about the plot was the fact that it was so over the top it could be viewed as a satire.


You can read more about Method Man online here (it also links several sites to purchase the book).


I'm at Gencon this week which is the reason for the single review over my usual Fistful.
Posted by Gwen at Thursday, August 14, 2008