We seldom publish press releases, but this book is a one that you owe it to yourself to buy it and read it. 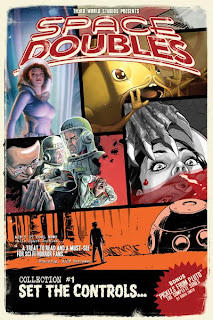 
Comixtreme dubbed it, "…a good looking, fast reading comic
that’s just a whole lot of fun, and makes me wonder why more people aren’t doing comics like this."


Comics And...Other Imaginary Tales
hailed it as, "…unique genre that has been missing too long from the comic racks."


Now collected into one 140 page trade paperback and presented in flip book format just like the original miniseries, "Space Doubles" asks the great sci-fi question--WHAT IS TO COME? With thrilling tales featuring everything from moon landings to zombies in space to existential bug infestations, the answer will shock you.

"The feedback from fans and reviewers has been overwhelming. When Closter brought this project to us I had a feeling the series would have a solid following among the sci-fi faithful, but I was pleasantly surprised to see it break into the top 300 in overall comic sales for the month", said Jon Conkling, co-publisher of Th3rd World Studios.

"I've always been a Science Fiction fan at heart, and at the time I started Space Doubles there 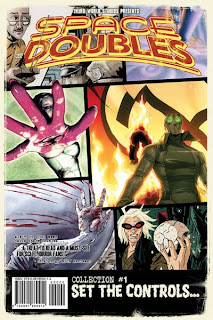 wasn't much presentation of the genre beyond the licensed product. … I wanted to see something out there that could give someone the same sort of feeling that one would get reading a collection of old SF short stories from PKD, Bradbury and the like", series creator Scott Closter.

Also included are 2 brand new stories of the very popular "Pickles from Pluto" by Brian Smith.
*Space Doubles Collection 1: Set the Controls* hits stands in October. You can pre-order it in the August preview catalog. (Diamond Order #/AUG084292/)