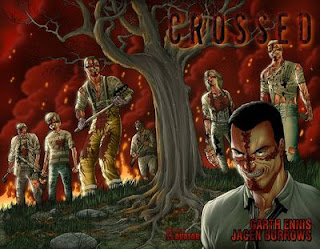 Avatar knows how to do a Zero issue right. We get a half of a comic (11 pages) for a third of the price ($1). The pages we get are not going to be reprinted in issue #1, but serves as a prologue or first chapter for the entire story.

First off I have to say that Jacen Burrows is continuing to improve as an artist. I have liked his work before, but there were times when it was a little off here and there, but this book just looked sharper and cleaner then ever before. He captures the astonishment, shock and horror of the world that is coming to an end.

The story is also well done, but Garth Ennis knows how to write a comic book. We start off with a narrator who reveals to us how everything started. At the end he mentions that he is narrating this story six months since the day the world came to an end.

Garth is giving us a world that apparently has been infected with a plague so virulent that it is infecting people all over the place at an insane rate. One of the elements of the plague is that a persons ends up with a cross type of mark on their face. They are also homicidal maniacs whose depravity appears to know no bounds.

Our narrator is sitting in a coffee shop when a “crossed” person walks in carry some body part. At first they think it is a joke until he bites off the nose of the owner. Running for the police he sees the police being attacked and people in the street being attacked by these “crossed” people. A plane is crashing into the town as they are infected and a nuclear plant explodes in the distance.

We are left with our narrator telling us no one ever figured it out, because you can never stop running long enough to do any research.

Looking forward to this post apocalyptic world story and will be especially interested to see what the conclusion will be. You have few choices from my view in this type of series. You either cure the plague, have your characters get killed or have them escape off planet or to an island or something. The other option is to tell the survivor’s adventures and set us up for a series of mini-series, but that would be my least favorite ending.

Tagline: It’s the end of the world as we know it, but it is just the beginning of Crossed.

Again not for the squeamish or easily offended, but I’d recommend spending a dollar to check this series out.