Growing Up With Comics - A Review 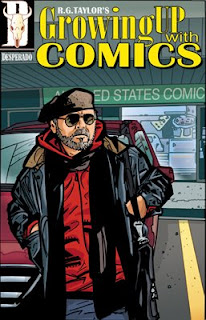 And now for something different, a new book review. I don't do lots of reviews because Jim and Gwen do such a good job with reviews but sometimes I just have to talk about a book. Growing Up With Comics is one of those books.

Growing up With Comics is a series of short stories written by a whole bunch of people but all illustrated by R.G. Taylor. In each story the author talks about how comic books have affected his life. I picked this months ago as part of the Indies selection and it's even better than I had hoped.

As an anthology, there are all types of stories, from the "how comics helped me through a tough time" to "how Eisner got me started in comics" and everything in between. There were two stories that really struck a chord with me. The first is the story about how the man likened his mothers fight for life and her kidney transplant with Spiderman's fight against everything in issues 31-33. That's a real simplification of the story but as a boy watching his mother is a great deal of pain, when he saw Spiderman going through similar overwhelming problems he decided if Spiderman could do overcome all odds then so could he. My other favorite story involved a store signing with Moebuis and a fan who makes one request too many.

Don't get me wrong, there are a couple of clunker stories in here too but the good ones overwhelmed the bad ones. The art is solid if unremarkable but isn't what sold me on this book. What really sold me was the love of comics that just dripped from the pages. Many of the authors had gone on to minor careers in comics as letterers or inkers or even comic store owners. Their love of comics had driven them to break into the business. Much like my love of comics keeps Jim, Gwen, and I entertained with this blog.

As I read the book, there were many points where I said "HEY! I've done that" or "I remember when I first started buying comics." The more I read the more I remembered the little details about why I collect and what really got me into comics. That's the real draw for this book, a chance to reaffirm all the good things that got you into comics in the first place.

Visit the official page here. It includes a preview of the Spiderman story I wrote about.
Posted by Lee at Wednesday, August 13, 2008