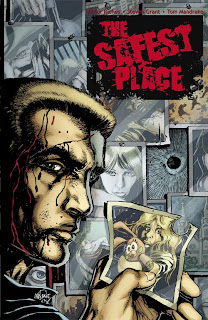 I picked up this graphic novel for a few reasons, but the one that grabbed my interests the most was the premise that the main character could not feel any pain. Years ago I had an idea for a character who could not feel pain and I had a lot of ideas of how to play with it and how being born that way would make the character view life in a different manner then the rest of us. That was part of my idea this is Victor Riches story and his is very well done.

I did not read this the first week I got it as I always make time to read the regular books so my columns can be done, but once I picked this up I could hardly put it down. I read it in one day over the course of the morning and when I got home from work. I would have probably read it all at once, but the need to not be later then I was for work started to push me to put it down.

Matthew Castle is a photographer who cannot feel any pain. We learn that immediately as he performs a daring rescue in a war torn area and survives being hit and can ignore the pain and still bring those people to safety.

The rest of the story is about how Castle gets dragged into saving a little girl from her father who had kidnapped her and taken her back to the . Her father is a rather prominent business man of ill repute, who is protected by US and British Intelligence for his ability to deliver information on terrorists. Castle has to deal with all of that to still save the girl. While there are a few improbable type things that occur, it is nothing that a normal suspension of disbelief wouldn’t allow for. I liked it because Matthew was not this perfect fighter and often only won because his foes would not expect him to be so resistant to the punishment he was being handed. I also like the ending, while maybe too pat; it felt right for this book. I’m guessing Riches brought in Grant to help him as Grant is a professional comic writer and I think that is really help as the book held together very well and was a compelling read. From start to finish the book was a true page turner.

Tom Mandrake nailed the art. I have always like Mandrake and this book is some of the best work I have seen from him in a while. Tom is a more realistic artist, but knows how to spot blacks with the best of them. His work is usually clean and dark, but had an extra edge to it this time. The edge was explained in the back by Tom telling us how he approached the art. I love hearing about process and this background material was great. One thing he did was to use smaller original art. That and other changes were designed to get a grittier noire look to his work and I think he succeeded.

Tagline: The drags you in and doesn’t let go until the end.