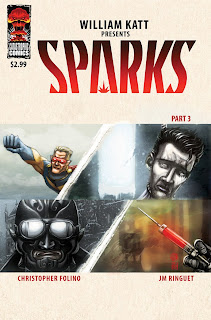 
This is the best issue to date and I have loved this book from the jump. The actual series is melding the super hero genre with the film noir genre. By setting it in the “golden age” the story takes on the noir quality naturally.

This issue we see Sparks at what appears to be rock bottom, as how much further down can you go in the food chain then a failed suicide. It some ways I think a failed suicide is looked on as even worse then a suicide as people think you are such a loser you could not even kill yourself. Sparks in his the hospital and a mysterious stranger arrives and injects him with something that (dare I say it) sparks him back to life. The stranger tells him to meet him at an intersection at midnight, turns out to be where his parents were killed. Once you hit rock bottom, you can only go up and Sparks manages to do just that. 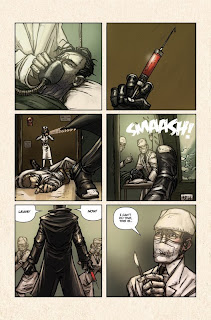 This book has a lot going for it and not the least is the artwork of JM Ringuet. For a more or less self taught artist I have to say that his talent must be innate. Each issue he continues to improve and his ability to render perspective, detail, mood and page design is excellent. It is fun to see a good artist just get better.

Chris’ work also is excellent. I have a big thing about pacing of comics. I think the pace of a book is as important an element in comics, movie and TV shows as any other element that is involved. One of the absolute best pacing jobs ever done in a comic in recent memory was Left on Mission from BOOM written by Chip Mosher. This book is also in that class in my opinion. Dialogue is dropped when it is not needed and the artwork and action take over and pull you along. Then after that action sequence is over the books slows down and we get exposition to explain why the man who saved Sparks did so. As Sparks is recovering and being trained by this man, the dialogue is narrative in nature and sparse so the story moves on in perfect rhythm.

Tagline: Super-heroes meets film noir as we learn about the man called Sparks.

1) Diamond made a mistake and missed putting in the order code for issue #5 – so tell you retailer to order it anyway JUN088056 F SPARKS #5 (OF 6) (MR) (PP #829).
2) So you have heard me telling you to read this book and have come to your senses, but your retailer did not order enough and is not helping. Buy it right from the source and go here. Get issue #1-#3 and if you want to you can buy copies signed by William Katt himself.
Posted by Jim at Monday, August 11, 2008