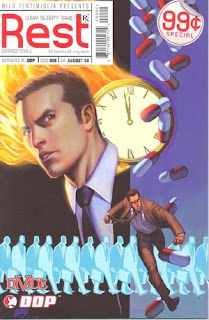 Bored of Batman? Sick of Secret Invasion? Do your comics never seem to deliver enough excitement? Could you use a brand new wonder-comic that eliminates the predictable?

Devils Due Publishing hates boring comics and the same stories over and over again. So when they published a new comic called Rest, I had to try it out. Now I’m trapped into reading the next issue to see what this is all about.

The above is my rewording of their hype for issue #1.

If it was not for their hype and some stuff I read about the book, I would not have known that this book is about a drug that lets you stay up 24/7 and not need to sleep. Right now with all the “real” work I have, the blog and a side project I will complete this week-end and all sorts of other stuff, staying awake all day would be tempting.

First off I usually hate Zero issues as a waste of paper or something that you really did not need to read. As long as this is not reprinted in issue #1, this was an excellent teaser for the series. We never get into what is going on, but we do get introduced and get the back story of John Barrett and his college room mate Teddy Blake. We find John Barrett is a 9-5 guy who seemed full of life and promise in college and now just exists. His old college room mate on the other hand looks better then he did in college and appears to be talking to himself. Teddy has a secret that is making him the way he is and he wants to recruit John and share his secret with his old friend. We know that it is the drug Rest, but we know little else. An excellent start and does what a teaser is suppose to do, make you want to read the next issue and I’m definitely in on this series.


The artwork by Shawn McManus and Lizzy John looked terrific. It was less of the almost cartoon like style then I saw from McManus in Aquaman, but still has all the greatness of his art, which is a fluid style, great story telling ability and a strong ability to have distinctive characters and strong work on faces. I’m not sure what process is being used and what Lizzy John is doing as far as inking, coloring or what, but bottom line the book has a very good look to it.

Tagline: This is one comic that won’t put you to sleep.

Rest looks to be a winner, jump on at the beginning.