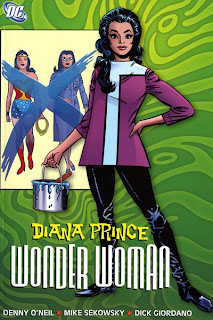 
This material is originally from the late sixties and the early seventies. I’m sure comic historians know the reasons behind the dramatic change that they did for Wonder Woman, but from my perspective the Wonder Woman formula was tired and boring and they wanted to bring their gal into the happening sixties.

It is both hilarious from today’s perspective as not all things age well with time. It is also frightening in wondering exactly what the adult male perspective of what a woman was like in that time.

In the final analysis I think it was a success in that these stories were certainly more interesting then (considering the slight taste we got in the first issue of Wonder Woman’s big change) what was happening before. Also I think the book actually got better without Denny O’Neil.

In my mind I envision an editorial meeting where Julie or Mort told Denny that we need to make Wonder Woman a modern and happening woman for today. Do whatever you need to do to make her hip and groovy. I assume that Mike Sekowsky wanted to have more control and asked if he could write this book and Denny was probably only too happy to get off this title. Still the history doesn’t matter.

In the first issue we get Steve Trevor on trial for murder and Wonder Woman is unable to clear his name. Steve apparently went bar hopping in a hippie bar after Wonder Woman had to leave to save somebody. The hippie chick he met that night was his only alibi. So in order to save Steve, Diana Prince gets a make over and becomes a modern glamorous gal so she can blend in with the fab crowd. Long story short she saves Steve and as Wonder Woman and Steve are cuddling on a couch the sensitive and loving Steve says to Wonder Woman about Diana “She is so much more than what I thought she was---in fact, I think I’ll ask her out one of these days and really get to know her.” Wow, way to score points with you girl friend telling her you are looking to make it with another girl. No wonder women (pun intended) called men pigs at times. Maybe Steve was still zonked out just grooving on what a ginchy chick Diana was. Yes, the dialogue was painful. Wonder Woman mooning over Steve was pathetic. Her wanting to change herself just to please Steve are lessons I would not want my daughters to have learned, but it was a decent read.

The next issue Wonder Woman has to give up her powers as Paradise Island needs to restore its magical energy and is leaving the Earthly plane of existence. This happens the same time Steve has taken a deep cover assignment to pretend to be a traitor to get in with some people planning to take over the world. The now human Wonder Woman is found by I-Ching, who is a blind Chinese man who teaches Diana all about karate, judo and everything else. He was looking for Diana as she is trying to find out what happened to Steve and I-Ching is after the same evil person Dr. Cypher. I-Ching trains Diana in the span of a few pages and off they go to find Dr. Cypher.

The adventures are pretty crazy and in the course of these seven issues Steve Trevor dies and is forgotten about in the span of a couple of panels. Private eyes and other adventurer “hunks” keep showing up in Diana’s life and are oddly all a little squirrelly. The first new man actually turns out to be a real SOB. Dr. Cypher is an evil woman, who makes Diana “ashamed that I’m a woman”. Comics were much simpler in that time frame and certainly not written with an adult audience in mind.

When Mike Sekowsky takes over he actually gives a great two part adventure of Diana going back to Paradise Island to help save her mother even though she is just a mortal.

Anyway it would be easy enough to pull out some panels and just mock the heck out of them and some are certainly deserving of it, but what I realized is that this actually made Wonder Woman more interesting then how she had been portrayed probably for decades before this. While some of the stories are certainly hokey and full of plot holes, it is an entertaining read.

As for the artwork, Mike Sekowsky is a hard sell to modern day comic readers. He was not a realists, he was more of an old school draftsman. He could draw Diana well and I think he can layout and tell a story better then many current artists, but his actual penciling style is a little plain against today’s standards. Of course he only had pencils to be able to do his work and he was producing a prodigious amount of work on a monthly basis.

The bottom line for me on this series is that it is entertaining, fun and a quick and easy read. This book has a lighter touch and nice change of pace from many of today’s headier and darker stories. I’m well into the next volume and volume three is on order. One quick note is the Wonder Woman appearance in Lois Lane in Volume 2 was so funny. It was apparent that the writer on that story had no idea what was done in Wonder Woman, as in her book she is Diana Prince, there is no Wonder Woman anymore. In the Lois Lane book she had done a cover story telling the world she is now just a mortal girl. A hilarious lack of continuity.

Tagline: For a hipper or groovier flashback you would have to drop some LSD. Diana is one ginchy chick.
Posted by Jim at Friday, August 08, 2008