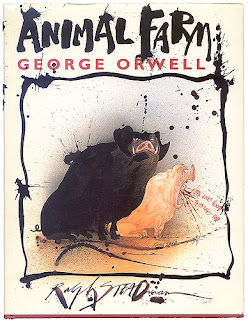 This week I was overwhelmed with Batman events in all shapes and sizes.

The first Batman event was that I finally saw the latest Batman movie. And, much to my surprise it was really, really good. I went to see it at an IMAX and that definitely added to the overall enjoyment of the film. It's one thing to see Batman jumping off a huge building on a big screen but it's an entirely different thing to see it on a IMAX. My only quibble, by the end of the movie I was ready for it to be over. It definitely got a little long, but that's a minor point.

The second Batman event was my reading the latest issue of The Comics Journal, which is always recommended. This month had an interview with Tim Sale (lots of Batman) along with a long discussion about a collaboration between Hunter S. Thompson and Ralph Steadman (no batman but cool art - see image to the right), and an 11 page preview of Slow Storm by Danica Novgorodoff (which was one of our Indies Picks). Normally, this alone would be a great issue but there was another interview that was quite exciting.

The was also an interview with an indie creator Josh Simmons. He's published by Fantagraphics so it isn't all that surprising to see him interviewed. What was surprising was just how messed up an artist and person he was. I'm always interested to see what makes comic book artists tick and this was a shocker even by my standards. But, it did make me interested to read some of his comics. Josh doesn't do superheroes but he does like comiX and horror. He managed to create one of the strangest Batman stories I have read in a long time.

I was impressed that Josh, basically an underground cartoonist, captured the essence of Batman and in one fell swoop twisted it all up. It's very well done and highly recommended. Correction, recommended if you are an adult due to a little graphic content and some language.

If you're interesting in a alternative-independent comics interpretation of the Batman character, read the strip here
Posted by Lee at Thursday, August 07, 2008