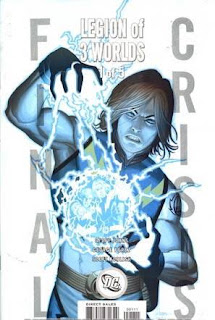 This book is such an easy sell for me, as I’m a huge Legion fan and recently (within the last year) I read the entire run of the second Legion and prior to that re-read most of the first run including all of the stuff after the five year gap by Giffen. In all their many incarnations the Legion has always been my favorite group.

Geoff Johns brought back the original Legion and seems to have picked up after Levitz ended writing the book, which is a good choice. I can give you pros and cons of the work after that, but the ultimate outcome was to make the Legion so convoluted that no one could follow the book, so ignoring that was a wise choice.

Johns brought them back in a six issue arc in Action Comics and the “new” continuity he has developed for them is where this story picks up. Superboy Prime through the manipulations of the Time Trapper ends up in the 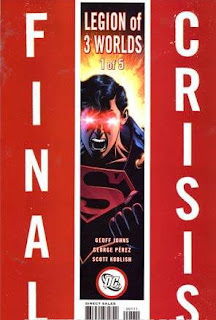 31st Century and finds out from a museum that he was relegated to a minor role in the history of Superman. He decides that he will take his rage out against the Legion as they are Superman’s friends. Prime goes to Takron-Galtos and frees the enemies of the Legion and is going to lead them against the LOSH.

As that story line is progressing we also see the Legion is facing a United Planets that wants them disbanded. Also the Legion is still recovering from their battle with Earthman and the repercussions of the Xenophobia that had been inflamed by him. As they are on the floor of the UP council RJ Brande shows up to speak for them. In a startling reversal of how the Legion got started the same three founding members are standing with Brande when he is assassinated and this time they failed to stop it. The obvious question is this how the Legion ends?

As the Legion is regrouping they find out about what has happened with Takron-Galtos and Prime and call in Superman to help. Realizing the extent of the menace Brainiac decides to recruit additional help from two parallel Legions. This is a great set-up and a wonderful start to a series. When does the hard cover come out?

If you want a negative about this book is that it does not have an obvious tie to Final Crisis. I’m not sure if it will, but I trust Johns to make it thematically connected or just a part of the overall feeling that every thing every where and every when is going wrong.

As for the art, George Perez is on pencils. Is there anyone else who can draw so many characters and do it well? Is there anyone else who can do a seventeen page panel and still have the backgrounds stuffed to the gills? The answer is NO and NO! There is no other artist that has all of the same qualities that Perez has. While some of his depictions of the current Legion are a little different then I was used to, this is because we are moving forward from Gary Frank’s redesign of the characters. I can not possibly praise Perez too much. His work has details, distinctive faces, great expressions, great action, beautiful layouts and a fluid feel to it. If I ever get around to collecting original art again, a crowd scene by Perez would be my holy grail. I do not envy the inker’s job with this book as I’m sure there is tons more work in doing a Perez page against many other artists. I hope you get a raise in page rate when you ink Perez. Scott Koblish work looks great in this book and I do not think he took any shortcuts. This book has stunning artwork from beginning to end on this book.

Tagline: The Legion of Three Worlds is a flat out winner.