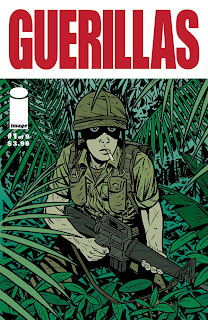 I always kid around saying how my tour in the really changed me, but since among many of my friends am I the only one old enough to have had an outside chance of serving I can at least get a double take from the person. I did know a lot of guys who served and each one who talked about it had a vastly different experience. So a comic that starts in the rice paddies of in the middle of the war (1970) does bring back a time and place for me.

I have always enjoyed war comics and was especially impressed with Garth Ennis’ work in that genre. Also the more I learn about the various wars we have been in, the more you have to appreciated what those who served have gone through. Not that I can do anymore then empathize, but the more I learn the more I can understand a little.

Add to that my affection for chimpanzees and a war comic set in about a group of trained Chimpanzees being involved and I had to check it out.

The beginning of the story made me forget the premise all together. We meet John Clayton a young man on his first patrol and it is apparent that he has no clue what he has gotten himself into. As the patrol moves forward John starts to flash back in time and we find out he is the child of a classic baby boom family. His Dad was a WWII veteran and John was just sort of drifting through his life. He decides that maybe the army could help him grow up and his Dad seems proud of his decision.

At the same time we see the patrol is taking casualties and a Sergeant takes John under his wing to try and protect him. The patrol continues and we see glimpses of some of the horrors of fighting a war where the enemy is not wearing a uniform to distinguish them as the enemy.

The company digs in with foxholes and are attacked. It is a massacre and John due to his own fear and circumstances ends up being the only survivor. When it looks like he will be killed also the enemy is attacked. John cannot see who is doing it, but they are swift, strong and merciless. John is shot during the fight and holding his side he calls out to the men who have saved him. When they get close John sees it is a group of chimpanzees.

The art is a minimalist style that is in the cartoon realism class, where minimal line work is used, but people are portrayed without cartoon exaggeration. It is a very easy book to follow visually as it is laid out well and I enjoyed the art.

Bottom line is I’m sold on this story. It is both realistic and the absurd blended together and in same ways that is what the era itself was all about. Plus I like John Clayton and I’m curious to see him grow and adapt over the course of this series. I’m also a sucker for homages and having the boy being helped by Chimpanzees being John Clayton is a great tribute to Edgar Rice Burroughs Tarzan character.

Tagline: Guerillas has the making of a great graphic novel and is worth a few bananas.