Rounding out the week in review we come to the highly anticipated and often raved reviewed, Batman #17, the conclusion to the “Death of the The Family” arc. There are at least three different elements I see associated with this book. One it is an event as DC tied in a number of other series, two it is a major Joker story and three is the overall reaction to the book. 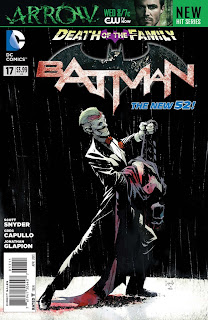 Let’s take the last first. CBR gave it five stars, others were raving about it as well. The Beat to its credit had a contrarian review. I think my biggest gut reaction to the story was – meh. It was not horrible, it was not earth shattering. It was a decent story that will probably plays better when I read just the Batman stories as a collected work. I loved the whole story at first but at the end of the day I think the super high praise is way out of line. There is almost a group mind at times in the comic industry and it has been decided that the Snyder / Capullo Batman book is a thing of genius. Personally I’m enjoying the run, but damn if O’Neil/Adams, Morrison and the Englehart/Rogers stuff wasn’t just as good and at this point the O’Neil/Adams and Grant Morrison material is superior. That is not a knock, it is a comparison. I’m just shocked at how great some people think it is. Everyone is entitled to their own opinion and since it is an opinion of a commercial piece of art, essentially we all get to be right.

I have a pet theory on why everyone is in love with the Snyder/Capullo run on Batman. First and foremost is the talent of the two individuals involved. Not only is Scott Snyder a great writer, Scott is a nice guy and very smart. He is a very skilled writer and works with his artists to make them the best they can be. He knows when to let the art talk and when to add the words. I love Snyder’s writing and will essentially read anything he does. From American Vampire, Severed, Swamp Thing, Detective and Batman, if the cover says Scott Snyder there is a 99.9% chance I’m buying it (I always leave a possibility of any writer doing something I won’t like). Second Greg Capullo along with his inker Jonathan Glapion is absolutely killing on this book. Hell, Greg has only not drawn one issue and it is not like he is phoning it in, his work is beautiful. The opening double page spread of the Joker having the Bat family at the dining room table is outrageous and so well done. He did an issue during the Court of Owls where Batman was stuck in a maze that was fantastic. So first and foremost this book is getting accolades because it is deserved.


Of course that is not my pet theory. My theory is that this is a very good to possibly great run at a time when DC is producing a ton of crap. Hawkman, Teen Titans, Ravagers, LOSH, Superman, Batgirl, Catwoman, Firestorm, Green Arrow, Red Hood, Red Lanterns, Team 7, GI Combat, Stormwatch, Grifter, Voodoo, Hawk & Dove and the list goes on and on. In the span of one and one half years DC has had so many failures it is impossible to count. Outside of Wonder Woman the entire super hero line has been okay to horrible, with most going down the horrible path. Even a critical success like I,Vampire did not make the cut. In a sea of crap, the one rose smells sweeter than any rose you have ever smelled. Which of course is what Batman is to DC, the one shining example in what is a sea of mostly sh*t.

Next let’s talk about this as an event. One thing DC has done well is ride the coattails of Scott Snyder and has tied in an enormous number of series to Batman with both the Court of Owls story and the Death of the Family story. It has been pure gold. My fondest for the Batman character even allowed me to be sucked into all the ancillary books, much to my chagrin. As an event I have read that the sales on the other books have all been pulled upward. Scott and Greg are like great players on a ball team where their work makes the others players better. In this case they have been spiking the sales on the other titles. The downside for me and I’m sure other fans, twice in a row is enough. I’m done buying the other books. A lot of these titles were off my list anyway, but Catwoman, Batgirl, Teen Titans, Red Hood and probably Nightwing are all being kicked to the curb. Absent any major changes in creative team or how DC conducts their business I’m off those books for the foreseeable future and will not get the tie in books again. In fact as a reader I felt the overall impact of ancillary books was to drag down the impact of the main arc. The Joker felt omnipotent in his abilities to be so many places at once and to be able to outsmart and capture every character on his own. For me it took away from the Joker being a scary madman to being more akin to a Lex Luthor type of villain. His planning, resources and genius were not those of the Joker. From a bottom line standpoint this is two for two so that means DC will be looking for Scott and Greg’s stories to be something else they can tie into in a few months. That is unfortunate in my mind as you maybe forcing a writer to take his story to places he may not want to take it arc after arc. In a year and half DC have done two Bat events, at this point it must be like heroin to them.

Last let’s talk about the book. The idea was that it was suppose to drive a wedge between the group. We had a lot of build up with fear of Alfred being dead, the Joker knows all their secrets and the opening it was a fear that the group had their faces mutilated. At the end, the Joker was defeated, Alfred is cured, no one’s face was mutilated but the group was apparently slightly disgruntled with Batman. From my reading I’m not even sure why they are even mad at him. I also have no clue how the Joker seemed to know so much about everyone but yet did not actually know their identities. Also this is the second time in a row where Scott used the ploy of “this could be true” and then says no it’s not. Also Batman whispering the Joker’s real identity to him is upsetting to the Joker and apparently has some significance. Since the entire history of the DCU is a freaking question mark I have no desire in even trying to guess who the Joker is and/or why it matters. It is a convention that I tire of, where a writer knows the secret but we are not told. If it is a cool and great idea, trust yourself and let us know. At this point it is something that may or may not ever be played on. Snyder does not do that crap in American Vampire, there he trusts himself. At the end it would have been a better story just in the Batman book and I look forward to a re-read down the road when I get the hard cover, I sure as hell will not get the collected edition with the tie ins. Heck at this rate I’m expecting this run to get Absolute editions and seeing Capullo’s art blown up will be a treat.

Anyway, like I said it is all opinions, so we can all be right, but I think the overall exuberant praise is more like the “Death of Reality” and not the family. Scott is capable of greatness, but this is not Dark Knight Returns’ territory.
Posted by Jim at Tuesday, February 19, 2013