Indies Preview for April Part 1 of 3

Thomm: Ah, the many and varied meanderings of Lee’s selections. What shall Spring’s wet month bring? Will we have blooms or merely mud?
Lee: Blooms!  It's always blooms.  It just later than normal this month. 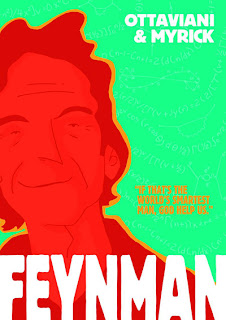 :01 First Second
Feynman GN SC by (w) Jim Ottaviani (A/C) Leland Myrick
The #1 New York Times-bestseller, now available in paperback! In this substantial graphic novel biography, Feynman presents the larger-than-life exploits of Nobel-winning quantum physicist, adventurer, musician, and world-class raconteur Richard Feynman. Written by Jim Ottaviani and brilliantly illustrated by author Leland Myrick, Feynman tells the story of the great man's life from his childhood in Long Island to his work on the Manhattan Project and the Challenger disaster. Ottaviani tackles the bad with the good, leaving the reader delighted by Feynman's exuberant life and staggered at the loss humanity suffered with his death. Also available in hardcover. 272 pgs, 6x9, FC, $19.99  Visit the Myrick here and read the NPR review, with lots and lots of sample pages here.
Lee: Starting out with a bang…a big bang as it were. I’ve been enjoying a lot of bio books lately and this appears to be an excellent addition.  It doesn't hurt that I've been reading about his other-worldly exploits in Hickman's The Manhattan Projects.
Thomm: A bio of a guy I’ve never known but who appears to have lead a very interesting life is a good start for the month’s selections. Somehow I doubt I’ll be staggered at his death, seeing as it’s the end we’re all reaching at some point, and he seems to have lived a long time. 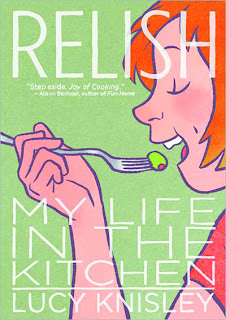 Relish: My Life in the Kitchen GN by (w/a/c) Lucy Knisley
Lucy Knisley loves food. The daughter of a chef and a gourmet, this talented young cartoonist comes by her obsession honestly. In her forthright, thoughtful, and funny memoir, Lucy traces key episodes in her life thus far, framed by what she was eating at the time and lessons learned about food, cooking, and life. Each chapter is bookended with an illustrated recipe-many of them treasured family dishes, and a few of them Lucy's original inventions. 192 pgs, 6x9, FC, $17.99  Lucy's site with preview pages here.
Lee: As a foodie this sounds awesome.  I am all about the good eats so I am interested in how she ties food into her life experiences.
Thomm: Since when did gourmet become an occupation? Really, all it means is you like to eat well prepared food. Unless you’re a food critic I’m figuring it’s a largely unpaid position. Anyway, whether this is any good is going to depend on the skills of Knisley as a storyteller, rather than the topic of eating. 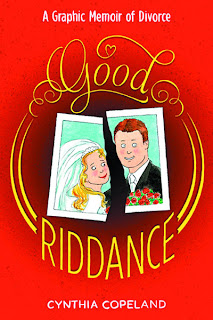 Abrams Comicarts
Good Riddance: A Graphic Memoir of Divorce GN by (w/a/C) Cynthia Copeland
When you think you live in a Norman Rockwell painting - married 18 years, three kids, beautiful old house in the country, successful career as a writer - you don't expect there's another side to the canvas. Until you read a lovesick e-mail to your husband that didn't come from you! Good Riddance is an honest and funny graphic memoir about suffering through and surviving divorce. Cynthia Copeland tells her story with an emotional candor and spot-on humor that makes Good Riddance poignant, painful, and hilarious all at once. 6x9, PC, 224 pgs, $17.95  Visit the author here.
Thomm: Well, now, this has potential. Nothing like bitterness to drive a story, after all. I wonder if she delves into the underlying issues in the marriage or just hangs her hat on the affair, which is a symptom rather than a cause. This is another one that’s going to depend on the skills of the storyteller because the subject isn’t all that big of a draw in and of itself.
Lee: You thought about it way more than I did.  I saw this and laughed!  Mostly because there are always books about finding love, or a loved one dying, or something like that.  There aren't nearly as many stories about he was awesome.. then he wasn't. 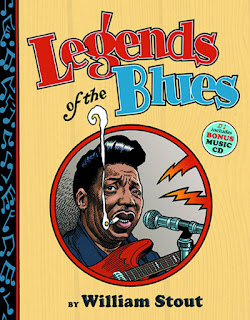 Legends of the Blues HC by (w/a/c) William Stout
Blind Willie Johnson. Willie Dixon. Ma Rainey. We know their music, and of course we recognize their names, but to their fans the faces of these blues legends are equally as intrinsic. Award-winning author and illustrator William Stout presents more than 100 legends of the blues, interpreting their iconic visages in dramatic portraiture that blends graphic design and humor with the stylization of a master illustrator. Legends of the Blues also includes authoritative biographical text, recommended songs, a music CD, and four exclusive bonus trading cards. 240 pgs, FC, 5.5x7, $19.95
Lee: Stout is an awesome artist who is perfectly suited for this material. It’s not really a story per say but it looks like a must have if you love music.
Thomm: Definitely not a story, but if you like the blues, this would be a great book to have. I’m not deep in the cups of the blues, but I would like to read this. 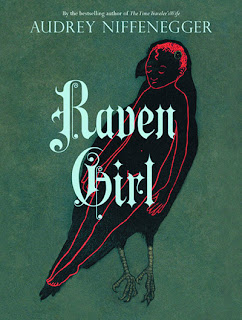 Raven Girl GN by (w/a/c) Audrey Niffenegger
Once there was a Postman who fell in love with a Raven. So begins the tale of a postman who encounters a fledgling raven while on the edge of his route and decides to bring her home. The unlikely couple falls in love and conceives a child - an extraordinary raven girl trapped in a human body. The raven girl feels imprisoned by her arms and legs and covets wings and the ability to fly. Betwixt and between, she reluctantly grows into a young woman, until one day she meets an unorthodox doctor who is willing to change her. 80 pgs, FC, 7x9, $19.95
Thomm: Wow. Bestiality, of the classic Native American fables sort, combined with a surgery akin to transgender reassignment. Allegory? If so, for what? Now, if I can just get Kevin Costner’s visage out of my head, we’ll be all set.
Lee:   I really skimmed over the bestiality aspect but you really couldn't miss the transgender angle.  The story sounds very, very interesting.  And, even though there isn't a link we've talked about Niffenegger's art before so I know that will be good. 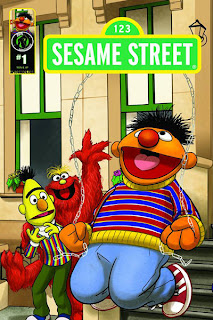 Ape Entertainment
Sesame Street: I Is for Imagination #1 (cover D) by (w) Jason M. Burns (a/c) Amy Mebberson
Sunny Day! Chase the clouds away as Sesame Street comes to comics for the first time! Join Elmo, Big Bird, Grover, Cookie Monster, and all of your favorites in this fantastic first issue! Featured this issue, Elmo decides to become a superhero, but he doesn't have any powers! It will be up to the always lovable Super Grover to teach Elmo that he can have any superpowers he wants, because he already has the greatest superpower - imagination! Available with 5 interlocking covers. FC, $3.99
Lee: Wish my kids were younger so they could appreciate this. Bravo to Ape for getting the license and getting the book out there.
Thomm: Yeah, it’s been a long time since my kids were Sesame Street fans, though my daughter does have a certain nostalgia for it. Not enough to get this, but if you have a kid in the age range for this, it’s an easy decision to buy. I particularly like that there’s no adherence to starting at the beginning of the alphabet, just jumping right into a kid’s most treasured ability – imagination. 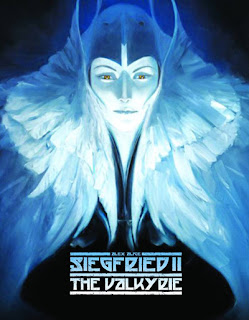 Archaia Entertainment
Siegfried Vol. 02: Valkyrie HC by (w/a/c) Alex Alice
A three-part story inspired by Wagner's classic opera The Ring of the Nibelung: Siegfried, born of the love between a mortal man and a Valkyrie, is a young orphan being raised by Mime, one of the last of the dwarf-goblin Nibelungs, in a dark forest with only wolves for friends and family. While his foster parent only wants to live in peace and solitude, Siegfried yearns to discover who his real parents were and live amongst his own kind, not knowing that Odin, father of the Norse gods, has a destiny planned for him: to fight the dragon Fafnir, guardian of the Rheingold. In this second volume, Siegfried sets off from his safe, forest home to find the world of men. With Mime as his reluctant guide, Siegfried plunges headlong into the dangers of the swamp of the sorcerer Volva, where he learns of his destiny to confront the dragon Fafnir! 144 pgs, 9x11, FC, $24.95  See preview pages from the first book here.
Lee: I got Vol 1 and really enjoyed it. It's a very good retelling of a classic story with excellent art.  Not much more to say than that.
Thomm: Great stuff for any fan of myth stories.