As a brief introduction I’m sick with a cold this week and have limited energy. So the Week In Review maybe a little weak as I’m only covering what I read, so a ton of potential great stuff is missing.

Of course I still owe the links for next week’s book and here is for Cosmic Comix and here is the detailed listing from Midtown Comics. I keep swearing that I’m cutting down my list but I don’t see it with 18 items coming in from my other list and Marvel publishing 15 to 18 issues of a book a year. Next week’s highlights are Batman, Before Watchmen the Comedian, Fatale, Star Wars, Battlefields, Todd the Ugliest Kid, Fury Max and Uncanny X-Men.

Part 1 is about the DCU books I got this week and read. I have yet to read the best book from DC which is probably Detective, but I read most everything else. Now I will be mixing in some mini-rants about DC with the books and I still hope to pull together a post by Shawn and I ripping the DCU later this week, but DC is changing so fast I can’t keep up with it or even care to any more. 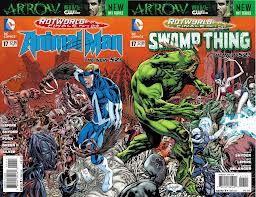 Animal Man #17 & Swamp Thing #17 is Rotworld Finale Part 1 & 2. The writers are Scott Snyder and Jeff Lemire the two writers DC has as their stars right now. The artwork in Animal Man was by Steve Pugh, Timothy Green II and Joseph Silver. Swamp Thing was by Andy Belanger. It is hard for me to say this, because I’m a huge Snyder and Lemire fan, but this story went on way too long and it appears next issue wraps up the story. We knew Rotworld was an artificial future and had to be reset so the books had no impact. We are promised some impact next issue, but next issue is also Snyder’s last on Swamp Thing. The story ends with Swamp Thing and Animal Man jumping into a vortex which will go back in time and we will have to see what the war cost. Of course it will be something like Buddy losing Maxine and/or Abby still being dead, but nothing regarding the great DCU, which never has really existed within these books. 38 issues of books (including the 2 Annuals) and the payoff is not that great. I will never want the trades or a HC collection of this. Also Andy Belanger’s art is ill suited for Swamp Thing and to have the penultimate chapter being drawn this way made the whole thing feel like a joke.


Now let’s talk about Channel 52, DC’s new idea to promote books within their comics. It is a two page strip set up as a news/talk show and has reporters like Ambush Bug and others. What the f**k is this crap. Am I seven years old to be amused by bad jokes and subtle clues hinting at things to come that I’m suppose to look for in what is coming up in the DCU? Why not have a letters page again where the editor and or writer address questions and build a fan base for each book?. DC is the only company not doing any letters page. How about Marvel’s AR which sometimes has creator’s comments, why not do those in each book as a written text piece or something, instead we get this drivel. 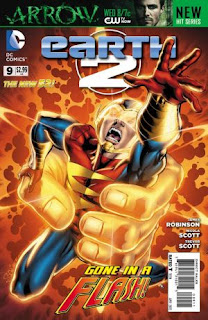 Earth 2 #9 by James Robinson, Nicola Scott and Trevor Scott is a beautiful book. Nicola’s work is fantastic and Trevor’s inks make her work stand out as being top notch super hero work. The story is okay, but again it is taking way too long to pull together. Of course I’m expecting a new JSA and maybe that is not where we are going. At least the first adventure concluded and now we are just still world building. Nice to see the old JSA characters in their new incarnation and it is cool that they are handling layering in a very diverse cast without pounding on their chests about it. I’m not giddy about this book, but I will stay with it as long as we have a consistent creative team.

I’m lumping two books together the Human Bomb #3 and World’s Finest #9. The reason is that both are books that are entertaining and having fun with bringing in new versions of characters. I like that, as with Earth 2, we are learning about these characters from the ground floor. Too many other characters in the DCU have a history, but we don’t know what the history is and are constantly teased about it. I get tired of all mystery and no story. These two books deliver my $3 worth of entertainment. In fact Human Bomb is Justin Gray and Jimmy Palmiotti’s third mini-series redoing all the old Freedom Force characters.

Stormwatch #17 I picked up because Jim Starlin is taking over the book and I thought it would be fun to check in on the book before it got it re-booted. It is a shame as these are great characters and the book is not working inside the new DCU right now. 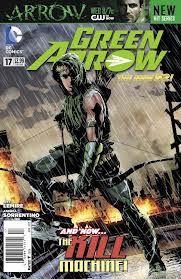 The best I saved for last and that is Green Arrow #1  #17 by Jeff Lemire and Andrea Sorrentino. I love Sorrentino’s art so the book looked great. Jeff Lemire tossed the whole new Green Arrow concept in the trashcan and started over again. A good thing to do with this book and I have no clue if this will jibe with the new JLA, but I could care. It is interesting because I have been watching the Arrow TV show and it is okay for what it is, but the comic seems to be aligning itself a little more to the TV show. Since I do not know who this Green Arrow is I was surprised to find out his being stranded on an island is still part of the overall origin. Anyway Lemire strips way his wealth, his high tech supports group and has a mysterious stranger show up and kick Ollie’s ass. Just as the mysterious Komodo is about to kill Ollie the mysterious Magus shows up to save Ollie. I know I said enough with the mysteries, but mysteries are okay if you are telling a story and Lemire is telling a linear story. These new elements are unknown to Ollie also. Magus also reveals that Ollie was never supposed to leave the island. It was a great opening and now I can comfortably get into this version of Green Arrow.