Sparks The Graphic Novel – A Review 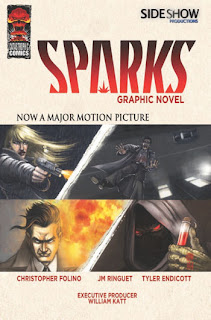 the movie is opening soon, you have to click on this link and check out the movie site and the trailer. A true independent movie that by all accounts and from every trailer I have watched the damn thing is killer. Alan Moore and Frank Miller are credited with making super heroes into a darker and grittier version of the genre. Some say they changed the industry forever, for good or ill, and comics become the domain of an older crowd forever leaving behind the 8-12 year old boy audience. What this graphic novel did and what the movie does is marry the film noir genre with the super hero ideal.

I have been fortunate enough to have become email friends with the creator of , Christopher Folino, I have also had the chance to do an interview with Chris, William Katt the executive producer and JM Ringuet who did the bulk of the artwork for the graphic novel.

The history of this project is almost as fascinating as the film. It was a comic book that never made it to the end of the mini-series. Next it was a motion comic and for my money the only motion comic I ever saw that had a true feeling of making the book come alive with a cinematic flair. Finally the movie has been made and the graphic novel has been completed.

Call your comic store and demand they carry it or hunt it down on Ebay or do whatever you need to do to get this story or click on this link. The movie may never make it to a wide release so set up the searches to await the DVD, the story is that good.

I hate to do a review where I rehash the plot and bore you to tears, but it is a story of love, death, destruction and redemption.  I love it because it uses all the great elements of film noir and then adds a twist by giving us a golden age type of super hero being the focus of the story. One of my favorite scenes is where walks into the police station and he says “he wants to report his murder”. A cliché to be sure, but well done it is not about the cliché it is putting a story around it that makes the cliché a great element of the story. 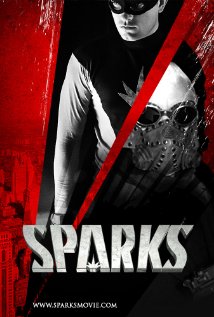 The story unfold and we get the origin of Sparks, the tough start, the move to the big city, the meeting of the love of his life and then it begins to unravel. We have a great bad guy, we have the man who pulls out of the depths of despair and gives him a life again. We have betrayals, double crosses, additional reveals and the layers of this onion are peeled back. You have to pay attention to the story and sometimes I had to flip back and forth and say “wait a minute wasn’t so and so doing this and not that”. That’s what I love about it, it is a rich story that is both complex and full or twists and turns and it is also a simple story of someone trying to be the hero and of course against all odds he ….well that would be telling.

I’m not going to lie I have been a fan of this material for a long time and I’m almost giddy to see it has come to full life as a graphic novel and the movie; I can’t wait to see the entire movie. I’m also thrilled to see the story completed as a graphic novel. Now due to various and at this time unimportant reasons the art was completed by Tyler Endicott. did a good job, but the different artists are not my preference for how a graphic novel should be done. It is not a negative as much as it is an observation. Also the final cut had some differences from what I read a few years back and while I was a little taken aback, I believe the changes are for the best as a graphic novel is a different animal from a serialized format. One of the biggest problems this industry has is often presenting stories which work collected as chapters in a monthly book. Few writers appreciate that a monthly book is not a graphic novel. Christopher has shown great respect and intelligence in approaching every method of presenting the story in a fashion that best suits the medium he is presenting it in. The comic is different from the motion comic which is different from the graphic novel which is different from the movie. I’m looking forward to the musical.

If you couldn’t tell I think is worth checking out as both a graphic novel and a movie. My biggest hope is this movie gets enough traction to open in a lot of theatres as I want people to see that the super hero genre can be used in conjuncture with other types of story other then the straight super hero stuff Iron Man, Avengers and the rest are giving us. Again not knocking that material, I love it, but this story is just as cool in its own way.
Posted by Jim at Wednesday, February 27, 2013